Viewpoint: Advocates for regenerative agriculture greet questions about its viability ‘not with facts or science but with defensive hype’

This article or excerpt is included in the GLP’s daily curated selection of ideologically diverse news, opinion and analysis of biotechnology innovation.
In Part One of this series, we looked at the historical reasons why interest in regenerative farming has eclipsed organic farming as climate change has taken center stage in the environmental movement and the popular zeitgeist.

In Part Two, we examined the biophysical or metabolic challenge that regenerative farming faces as well as the steep economic hill it must climb.

Part Three will examine how key questions about regenerative agriculture’s viability are met not with facts or science, but with hype.

Editor’s note: This is part three of a four-part series. Read the rest of the series:

A farm may be called regenerative if soil is the product and food the by-product of production. If soil is the farm’s product and inputs are kept low, the questions are then: Where does necessary nitrogen come from? If nitrogen comes from greater use of nitrogen-fixing plants, legume crops, and green manures, where is the land going to come from? Animal manure can only get us so far because the nutrients in manure come from the land so, due to entropy, they can only put back 20% or so. And then, how to make a farm economically viable by trying to get sales of the byproduct to subsidize the product?

A cynic might suspect that advocacy of regenerative farming grew as research literature grew showing that organic farming does not have a smaller environmental footprint than conventional farming. In fact, organic often has a larger footprint. Critics of industrial agriculture started shifting to advocacy for agroecology and regenerative farming, two terms that were not always clearly defined and for which lots of theoretical claims could be made without a body of research to pin them down.

In fact, in 2017, On Pasture Magazine reviewed 30 years of research and found no evidence of net carbon sequestration associated with managed grazing.

About ten years ago, two scientists argued about these two things. One said that it was doubtful carbon increase was occurring due to grazing management, and if there were changes, it would be difficult to measure them. The other said that based on soil organic matter increases alone, soil organic carbon had to be increasing, and it was because of his grazing management. To resolve their disagreement, they did what scientists do – they set up experiments to answer the question.

They now have nine years of data on the effects of management intensive grazing (or Adaptive Multi-Paddock grazing as it’s sometimes called in research circles) and it shows grazing has not increased carbon sequestration in the soil. In fact, the grazed only plots have continued to be a carbon source, not a sink.

… In almost 30 years of looking at all these different things, researchers have yet to find a solid connection between grazing and increases in soil carbon

This is not to say that newer research hasn’t found evidence that intensive grazing can achieve net carbon sequestration. In addition to the 2017 paper by Paige Stanley that we highlighted in Part Two, other suggestive examples are not hard to find. Nevertheless, the state of the science when Alan Savory and Gabe Brown started making extraordinary claims about the potential of intensive grazing and regenerative farming did not support those claims. A number of people were dubious.

After a visit to Washington State University by Allan Savory in 2012, Chad Kruger, the director of WSU’s Center for Sustaining Agriculture & Natural Resources wrote a blog post underlining that most scientists in relevant fields felt that Savory and his recommendations to farmers and ranchers was getting out ahead of the evidence.

Savory has been the target of some fairly harsh criticism within the rangeland science community, none more critical than a paper by Briske et.al. (2008) concluding that the experimental record for short-duration grazing systems (that they consider equivalent to Holistic Management grazing) was inconclusive and therefore doesn’t support HM recommendations. They concluded that most of the science used to support management recommendations for these systems is either anecdotal or statistically inconclusive because the experiments were poorly designed (they didn’t isolate single variables for analysis). Savory and his closest proponents (Teague et.al. 2008 [pdf] – strangely, a co-author on Briske et.al. 2008) have provided rebuttals arguing that Briske and colleagues misrepresented HM in their study sample and that their conclusions are not relevant. While critiques are not necessarily a definite dismissal of the legitimacy of HM, they raise a valid question … “Where’s the data?”

I would love to believe him. But I’ve been in this game too long to take anything on trust – especially simple solutions to complex problems. So I went to the library and started reading. A large number of academic papers have been published in response to his claims, testing them by means of experimental and comparative studies. The conclusion, overwhelmingly, is that his statements are not supported by empirical evidence and experimental work, and that in crucial respects his techniques do more harm than good.

A new review of experimental results, in the journal Agricultural Systems, has this to say about Savory’s claims that his intensive rotational grazing (IRG) can regenerate grassland:

The vast majority of experimental evidence does not support claims of enhanced ecological benefits in Intensive Rotational Grazing compared to other grazing strategies, including the capacity to increase storage of soil organic carbon … IRG has been rigorously evaluated, primarily in the US, by numerous investigators at multiple locations and in a wide range of precipitation zones over a period of several decades. Collectively, these experimental results clearly indicate that IRG does not increase plant or animal production, or improve plant community composition, or benefit soil surface hydrology compared to other grazing strategies 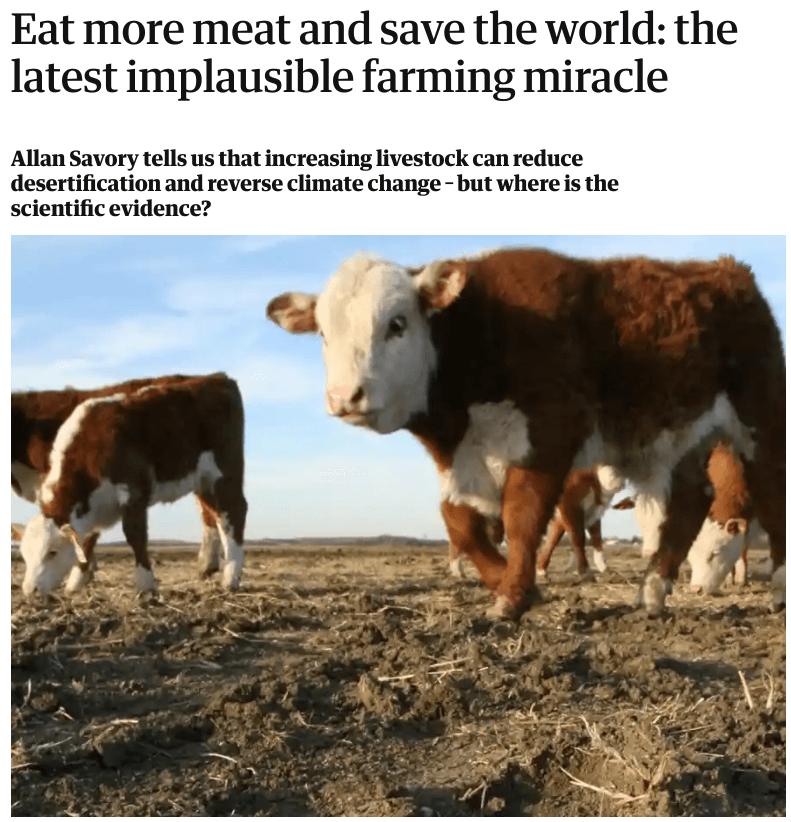 Not that the benefits are impossible but the kind of strong effects that Savory was claiming generally aren’t that hard to find in the data.

In 2018, after viewing South Dakota rancher Gabe Brown’s TEDx Talk on regenerative farming, the Washington State University agronomist Andrew McGuire found the principles he was expounding to be solid. Nobody would oppose minimizing tillage, maintaining soil cover and living root systems as much as possible, increasing biodiversity, and integrating livestock management with crop production. However, McGuire found Brown’s claims around increased soil carbon to be improbable:

First, the amount of plant biomass required to obtain Brown’s increase in soil organic matter (SOM) is daunting. Given the 15% conversion rate, he would have had to add 31 tons (dry), per acre, of plant or other biomass to the soil, every year, for 20 years (see figure 1). If 31 tons does not mean much to you, it is more than the entire aboveground biomass of a fully fertilized, irrigated corn crop. It is more than a full season, four cuttings, of irrigated alfalfa hay production. It’s a lot of biomass. And this amount of biomass was added to the soil –what was harvested as a crop or as meat through livestock grazing is in addition to this 31 tons per acre per year.

Building soil organic matter requires more than biomass; nutrients are also needed, either in the added biomass or from the soil. SOM averages 5% nitrogen and 0.5% phosphorus. So then, Brown’s SOM increase requires 470 lb. of nitrogen and 47 lb. of phosphorus per acre, each year, for 20 years. This is more nitrogen than is applied to a high yielding irrigated potato crop, and as much as is harvested in a 9 ton per acre alfalfa crop. And this 470 lb of nitrogen per acre is in addition to what is needed to produce a crop or to produce meat. 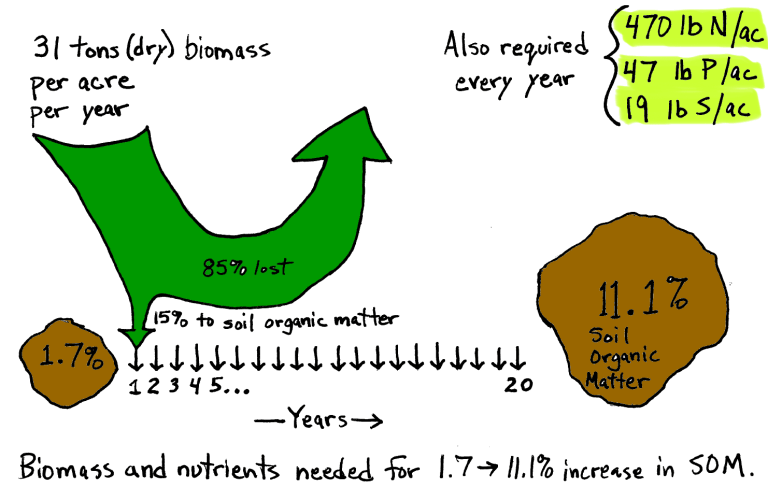 To top this all, Brown states (after mentioning his land with 11.1% SOM), “We’ve done this without the use of any synthetic fertilizers, pesticides, or fungicides.”

We are to believe that biodiversity-powered microbes free up large amounts of phosphorus, fix large amounts of nitrogen from the air, while plants produce 31 tons of biomass in a short North Dakota season, while also producing harvested crops and livestock?

I cannot say that this scenario is impossible, but I find it highly improbable, because if this is true, then it means that science has missed an astounding, extraordinary process. And it has been missed by not just agricultural soil scientists, but also those who work in prairies and forests, because, according to regenerative agriculture, this is how it works in nature. And we have been studying nature for a long time. And this is not just about a claim made by Gabe Brown; similar claims are commonplace in regenerative ag circles. If this and similar claims are true, then we are talking about a revolution in agriculture, which is what regenerative farmers and their supporters say it is.

This leaves us with regenerative ag–an approach to farming built on worthy principles, with a nascent and growing body of research suggesting that it could result in net carbon sequestration under the right condition. But the scale and scope of what’s possible is often buried under a flurry of overblown claims. The fog machine of hype leaves policymakers trying to craft regulations and deploy resources in an unhelpful haze. In the final installment of this series, we’ll look at two distinct ways of trying to framing regenerative agriculture realistically and explore some of the implications of each.