This article or excerpt is included in the GLP’s daily curated selection of ideologically diverse news, opinion and analysis of biotechnology innovation.
As nations around the world struggle with COVID-19 and related economic lockdowns, African countries are fighting another plague: swarms of locusts. Massive crop damage during 2020 left many Africans hungry, and new swarms now threaten 2021 crops. Fortunately, some national and local governments are making headway in getting the locusts under control through aerial spraying of pesticides, despite challenges created by anti-pesticide pressure groups.

As I noted last year, Greenpeace and other green activist groups have made locust and other pest control operations more expensive and increasingly difficult to manage because they push pesticide bans and regulations that reduce options and raise costs. People living in developing countries suffer the most.

Nonetheless, with the help of humanitarian organizations, some nations and localities have been able to deploy aerial pesticides with the few remaining products on the market, and they are seeing some successes—underscoring the essential role of aerial spraying.

A recent situation report from the Food and Agricultural Organization (FAO) explains that things have improved in Kenya because of aerial spraying, in addition to weather less favorable to the locusts:

“The present situation in the Horn of Africa differs significantly from one year ago. The current swarms are smaller in size and less numerous. So far, the swarms have not matured or laid eggs. Very little rain has fallen since the end of the short rains last year. Intensive aerial control operations, supported by ground teams, are well-established and making good progress in reducing locust infestations.”

There is also positive news from Tanzania. A story in the Tanzania Daily News reports that in the Siha district “huge swarms of desert locusts invaded Tanzania’s northern Kilimanjaro region from Kenya, darkening horizons and causing panic among farmers, who feared destruction of their crops.” The government was quick to respond, “deploying special planes to spray pesticides in the affected areas.”

“Siha is now free from desert locusts; there is no single of them that is alive in our district. How good it is to have proper communication, for the challenge arose, growers panicked but informed us, in turn we communicated the issue to the Ministry of Agriculture that acted quickly and now the challenge is over.”

Such efforts must continue as locust swarms emerge throughout the spring and spread across Africa and into Asia. According to FAO, 42 million people now face “severe acute food insecurity” in locust-infested regions. Somalia has not had enough resources to pay for spraying, and now reports indicate that 3 million people are suffering from food shortages there. Somalia’s public officials have declared a state of emergency with the hope to gain financial support from the FAO to pay for spraying.

Yet Greenpeace continues to advocate against the last few effective pesticide products remaining on the market—such as chlorpyrifos—making unwarranted claims about the risks of spraying. The group suggests that governments should rely on “biopesticides” instead. It is true that biopesticides and other technologies can play a role now and in the future, but they have serious limitations that Greenpeace fails to mention. 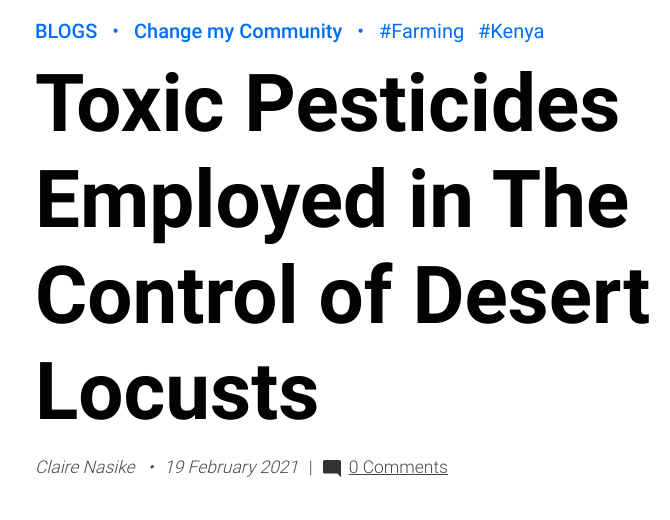 “Compared with chemicals … the biopesticide takes longer to kill the locusts, so it is more useful before the hopper bands of young locusts have begun to fly,” explained an FAO representative in an article for Science Daily. The article also points out that addressing large locust swarms “requires fast-acting chemical pesticides sprayed from aircraft.” Ideally, Africans would eventually have affordable controls that would prevent the swarms, but until they do, aerial pesticide spraying remains the essential means of control, particularly during massive swarm situations.

Accordingly, Greenpeace’s suggestion that biopesticides could replace traditional pesticides is similar to green activists’ advocacy of renewable energy sources and demonization of more reliable energy sources, such as coal. When policy makers followed that advice, the result was a far less reliable electricity grid—one that fails when it’s needed most—as Texans recently learned.

In the final analysis, locust control officials need the freedom to leverage the best tools for each situation. Factors such as accessibility, affordability, and effectiveness play a major role in their very situation-specific decisions. It is not helpful when activist groups second guess pest control operations and unfairly malign valuable control methods, while offering only insufficient alternatives.

Food security for millions of people is at stake, which underscores the need for pest control operations to disregard misinformed activist advice and focus on what works.

Angela Logomasini is a senior fellow at the Competitive Enterprise Institute. Logomasini specializes in environmental risk, regulation and consumer freedom.