This article or excerpt is included in the GLP’s daily curated selection of ideologically diverse news, opinion and analysis of biotechnology innovation.
Back in 2019, I wrote about some of the tricks that drug companies use to hang onto brand name sales even though the drug’s generic equivalent may have been around for years, if not decades (See The Insane World Of Online Decongestant Commerce).

For example, Sanofi really wants you to buy the Allegra brand, even though the generic equivalent fexofenadine sits right next to it on pharmacy shelves. The solution? Sell Allegra with small changes and voila! Three “different” products: Allegra Allergy 12 hr, Allegra-D (Allegra-D with phenylephrine, a useless decongestant added), and Allegra-D 24 (extended-release formulation with phenylephrine, the same useless decongestant added).

This is nothing compared to what McNeil Consumer Healthcare (part of Johnson & Johnson) has pulled off with Sudafed. Of the 6 brand-name Sudafed products I could find, only one contained pseudoephedrine – the drug that makes the stuff work at all (1). Here is a brief summary of the differences between pseudoephedrine (old Sudafed) and phenylephrine (“new” Sudafed)

It would seem that Sanofi is at it again. The company has come out with a new “formulation” of the wildly successful stomach acid reducer Zantac, the world’s first billion-dollar drug. It’s a brand name worth hanging onto, but Sanofi had to pull a bait-and-switch is to do so. Here’s why.

Would you care for a Zantac?

First, the name Zantac sort of implies that you are buying…perhaps…Zantac, no? No. The drug in real Zantac was called ranitidine. But real Zantac-ranitidine ran into all kinds of trouble because it contained a carcinogenic impurity called N-nitrosodimethylamine (NMDA). NMDA, which is also a seriously bad liver toxin, was found in Zantac products worldwide. Worse still, the amount of NMDA increased with temperature and time, leading to its recall in 2020 (2). Now Sanofi is selling famotidine, the generic name of the drug in Pepcid, as Zantac 360o. What does this name even mean? Beats me. I would have preferred something a little more honest, like “The Drug Formerly Known as Pepcid But Will Not Give You Cancer,” but this is admittedly not all that catchy.

Maybe even worse is all the nonsense on the box, which is plenty misleading, probably intentionally so. The 360o remains a mystery. Was it really hot in the factory where the drug was made? Or is the pill spinning around in circles? The rest of the stuff is pure salesmanship. The term “new formula” is incorrect. It is not a new formula. It is a different drug, not the same one with cherry flavor added. That would be a “different formula.” Then we have “Original Strength” and “Maximum Strength,” which Sanofi deems necessary because people apparently cannot multiple 10 milligrams by 2 and come up with 20 milligrams. Do we really need both of these taking up shelf space? Or is Sanofi trying to imply that the “Maximum Strength” is something special rather than two regular pills?

Related article:  Viewpoint: FDA must do more to protect consumers from 'outright fraud' of dietary supplements
Follow the latest news and policy debates on agricultural biotech and biomedicine? Subscribe to our newsletter.
SIGN UP

Finally, we have “Now With Famotidine,” as if some special new ingredient has been added to the original Zantac to make it even better! Nah, Sanofi just changed the name and did so in an intentionally confusing manner. Maybe they should have just gone with this… 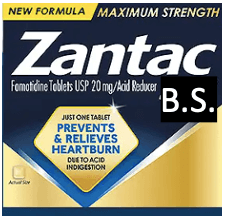 It’s enough to give you heartburn (3).

(1) Sudafed is now sold behind the counter, and ID is required to purchase it. There are also limits on the amount of drug that can be bought. This is because pseudoephedrine, the active decongestant, can be used to synthesize methamphetamine. Sudafed PE contains phenylephrine, which cannot be converted to methamphetamine. It is sold without restrictions.

(2) Zantac was not the only drug to be contaminated with NDMA. The blood pressure drug Losartan and two others in the class contained the impurity as did the diabetes drug metformin.

(3) This is probably the 15th (or more) article I’ve written condemning certain practices of drug companies. Am I (or ACSH) “pharma shills” like some fools claim? You tell me.

Dr. Josh Bloom is Executive Vice President of the American Council on Science and Health. He has published more than 60 op-eds in numerous periodicals, including The Wall Street Journal, Forbes, and New Scientist. Follow him on Twitter @JoshBloomACSH