This article or excerpt is included in the GLP’s daily curated selection of ideologically diverse news, opinion and analysis of biotechnology innovation. It is posted under Fair Use guidelines.
South African scientists are urging governments across the continent to take concrete actions to enhance the acceptability and adoption of genetically modified organisms (GMO) — a move they say could unlock the region’s vast food potential.

The scientists issued their call based on research they conducted in Africa and published in the journal Biotechnology and Genetic Engineering Reviews. They determined that Africa stands to benefit a great deal from biotechnological innovations, such as growing GMO crops. These include increased yields, better resistance to pests and diseases, enhanced nutrient composition and better food quality. These innovations could help address the recurrent challenges of hunger, malnutrition and food security in many parts of the continent, they note.

The researchers — all based at the University of Johannesburg — identified various critical factors that influence the acceptance and adoption of GMOs in the continent. These include limited knowledge and awareness of GMOs among state actors and the general population, safety considerations, lack of adequate policies and regulatory frameworks that govern GMOS and insufficient political will, coupled with external influence.

“The acceptance and adoption of GMOs on the continent has been remarkably slow, perhaps due to contrasting views about the benefits and safety concerns associated with them,” the study notes. “Biotechnology will only be accepted when people understand that GMOs contribute to food security (and) sustainable development without any known threat to their overall well-being.”

The authors root for increased public knowledge and awareness about GMOs to shore up favorable consumer attitudes towards GMOs, government regulations and farmers’ adoption of the technology.

A case in point is Kenya, which in the earlier years of the last decade faced public concerns over GMOs and their consequences on health due to inadequate science-based communication on the subject. The country’s ban on importation of GMOs in November 2012 was influenced in part by the now-disproven study published by Séralini et al. (2012), which falsely claimed GM crops cause cancer, and did not take into account the views of local biosafety experts. Kenya has since moved ahead with GM crops.

Overall, the continent has recorded an increase in GMO awareness. Reports from various countries in Sub-Saharan Africa have noted greater receptivity toward GM crops and an appreciation of the positive values of biotechnology in increasing farmer revenues. But while improved awareness has been shown to drive up the acceptability of GMOs among communities in Africa, the study concedes that this must be addressed concurrently with other factors for optimal results.

The authors determined that African states should fast-track and streamline regulation on GMOs while reviewing existing frameworks to boost the continent’s food security situation.

“Regulatory approval still remains key in slowing down the realization of the technology potential benefits,” states the report. “One of the main challenges to Africa’s adoption of GMOs is her regulatory apparatus.”

Many African countries, including Uganda, lack the capacity to establish adequate policies, regulations, implementation and monitoring frameworks regarding GMOs. Some of the of the existing regulatory frameworks in Africa are also expensive, which makes them unaffordable by local institutions, and are hampered by inefficiency and lack of transparency.

There is a need to develop cost-effective regulatory frameworks and policies for GMOs, applicable within individual states and local jurisdictions. The study further urges harmonized regulatory systems across the continent to facilitate collaborations, trade, handling, knowledge transfer, development, adoption and commercialization of biotechnology.

“A harmonized biosafety law on the continent would create common standards across the internal market, so that one country does not obtain an undue economic advantage over other countries as a result of different rules,” the study states. “Also, a harmonized law would eliminate or at least minimize the burden of regulatory compliance, ensuring a one-stop GMO approval and risk assessment systems for both national or trans-national transactions.”

The researchers identify safety considerations as the principal drawback to the adoption of GMOs on the continent. Safety is the major topic around GMOs in Africa. Despite rigorous assessments and safety checks within the national and international biosafety frameworks that ensure the safety of biotechnology, perceived risks, which are often unfounded, have contributed to the slow adoption of GMOs in many African countries.

Bad press and wild claims from a section of anti-GM activist fronts and leadership within the continent has further exacerbated the concerns. General criticisms against GMOs in Africa include concerns over human health and the environment, claims that GMOs are a tool of Western domination of Africa and suspicions about bioterrorism, among others. Critical points of scientific safety concern are the possibilities of gene escape, gene migration, allele flow or gene flow. 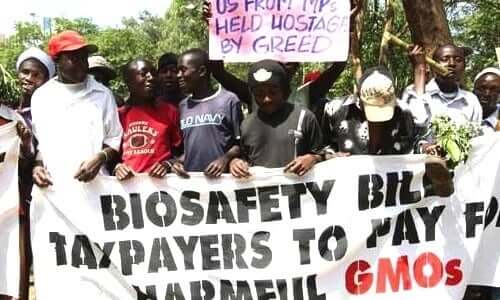 Allaying the fears, the researchers point out various studies that have vindicated GMO foods from perceived risks to humans and the environment. Further vindication is provided by the more than two-decade history of GM crop cultivation in the continent without any scientifically proven food safety and health-related issues.

National priorities among individual countries have also played a role in influencing the adoption of GMOs across African countries. Recent years have seen more countries warming up to the technology, and quite a number of countries have registered sterling milestones in GMO crop farming.

South Africa was first on the continent to approve the commercial release of GMOs in 1997, and by 2018 had about 2.7 million hectares under cultivation in GM crops, ranking within the top 10 GM producers in the world.

Egypt pioneered GMO farming in North Africa and Sudan, the continent’s largest country by landmass, was the first member state in the Common Market for Eastern and Southern Africa (COMESA) to commercialize a GM crop. In 2017, Sudan recorded a 98 percent adoption rate of pest-resistant GM cotton among farmers, with 192,000 hectares of land in production. Other countries have shown remarkable promise. Nigeria, Kenya, Ethiopia and Zambia are party to the Cartagena Protocol on Biosafety, an international regulatory standard. Nigeria has approved the release of both GM cowpea and cotton and is moving forward with GM maize.

After a seven-year ban on GM crops, Kenya authorized the cultivation of a pest-resistant Bt cotton variety, while Ethiopia reviewed its law on biosafety in 2015 to permit confined field-testing of GM crops. The Kingdom of Eswatini passed the Biosafety Act in 2012 and in 2018 released its first GM crop, Bt cotton. Malawi has also adopted Bt cotton and projects a rise in production from an average of 15,000 metric tonnes to 40,000 metric tonnes. Tanzania, which is conducting field trials for drought and pest-resistant maize, could effect commercialization this year, despite setbacks due to crop performance evaluation and an amendment of the nation’s biosafety bill prompted by the COVID-19 pandemic.

Other notable milestones include the passage of the Biosafety law in 2011 in Ghana, where GM cowpea is under consideration, and the Ugandan parliament’s passage of the Genetic Engineering Regulatory Bill in 2018. However, Uganda’s president has not signed the law, leaving the country in regulatory limbo.

Despite these advances, the researchers say more effort is required to create an enabling environment that leads to the acceptance and adoption of GMOs in Africa as one scientifically proven way to alleviate the food security problem that plagues many of the continent’s 1.2 billion people.