Angelika Hilbeck is a senior researcher at ETH Zurich’s Institute of Integrative Biology in Switzerland, a sustainability focused organization, and outgoing chair of the European Network of Scientists for Social and Environmental Responsibility (ENSSER), an anti-GMO  group founded by French biologist Gilles-Éric Séralini and other activist scientists and campaigners. [GLP profile of ENSSER here]. She is an outspoken critic of agricultural biotechnology.

Hilbeck has published over 80 studies, articles, and book chapters, according to Researchgate. She became a member of ENSSER shortly after it was formed in 1990 and currently serves as the organization’s chairperson. She helped organize preparation of a statement, published in the predatory pay-for-play open journal Environmental Sciences Europe in January 2015 and co-authored with Indian philosopher Vandana Shiva, Consumer Reports’ Michael Hansen and other activist scientists, claiming that there is “no scientific consensus on GMO safety.”

In the following joint statement, the claimed consensus is shown to be an artificial construct that has been falsely perpetuated through diverse fora. Irrespective of contradictory evidence in the refereed literature, as documented below, the claim that there is now a consensus on the safety of GMOs continues to be widely and often uncritically aired.

New York Times reporter Danny Hakim prominently featured Hilbeck in a December 2016 article, “Scientists Loved and Loathed by an Agrochemical Giant.” Hakim has written several articles critical of crop biotechnology and agri-business–one of which was rebuked by many mainstream scientists and journalists. It featured comments from numerous scientists, including Hilbeck, who claimed they encountered ‘problems’ while working with agricultural companies that led them to believe that their scientific integrity had been compromised.

Hilbeck portrayed herself to Hakim as a whistle blower, and the Times’ writer provided a global platform for her claims. She said that while researching insect resistant Bt corn in the late 1990s, she discovered it was toxic to the lacewing insect, which eats other pests. At the time, she was working for Agroscope, the Swiss Agricultural Research Center, which had a contract with Ciba-Geigy, a predecessor of Syngenta. From the New York Times:

[Ciba-Geigy] insisted that she keep the research secret…[But] Hilbeck said she refused to back down and eventually published her work. Her contract at Agroscope was not renewed. An Agroscope spokeswoman said the episode took place too long ago to comment on.

Hilbeck claimed, and Hakim represented without challenge, that the agrochemical industry consists of ‘little stalkers,’ attempting to discredit her and her work.

Dr. Hilbeck continued as a university researcher and was succeeded at Agroscope by Jörg Romeis, a scientist who had worked at Bayer and has since co-authored research with employees from Syngenta, DuPont and other companies. He has spent much of his career trying to debunk Dr. Hilbeck’s work. He followed her lacewing studies by co-authoring his own, finding that genetically modified crops were not harmful to the lacewing.

According to Hilbeck, every article she has written over the past 15 years was followed shortly thereafter by a rebuttal piece by Romeis. He rejects that characterization, telling Hakim, “Her work does not affect our mission in any way,” and that studying GMOs was “not patented by her.” Romeis mot recently co-authored a paper in 2014 entitled “The End of a Myth,” challenging Hilbeck’s central findings. The mainstream consensus among independent scientists is that there is no validity to Hilbeck’s claims and that her original research methodology and findings were flawed.

A 2016 Freedom of Information request unearthed emails by Hilbeck that challenges her self-portrayal as a non-ideological researcher in search of the truth but under unfair siege from corporations. She characterizes mainstream biotechnology researchers as corporate apologists for “industrial agriculture”–a popular buzz phrase of the extremist, organic movement. 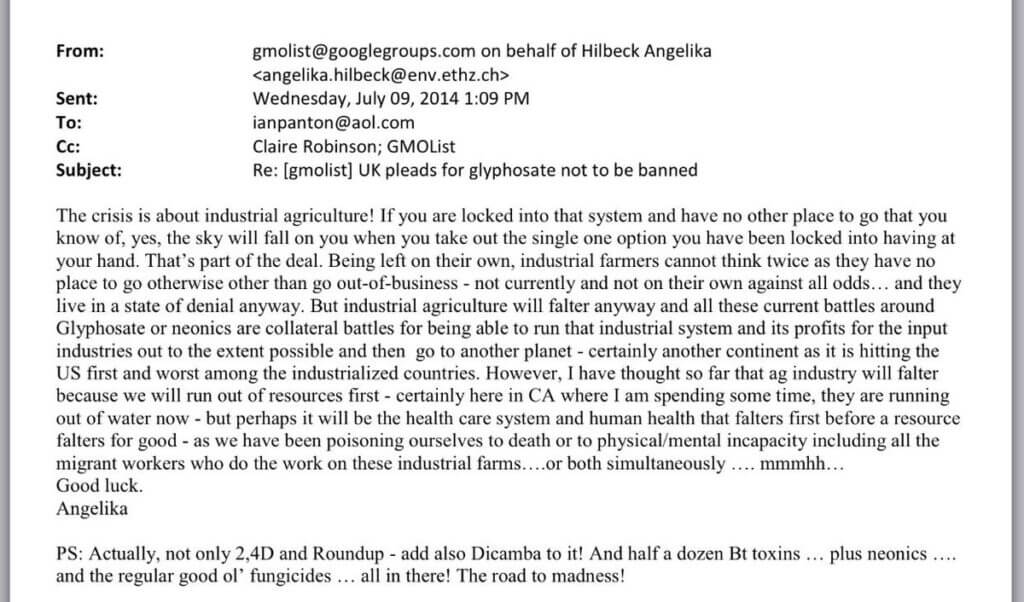 In this 2014 email to the GMOList group–a collection of the most notorious anti-GMO activists, led by Séralini and overseen by Claire Robinson, his PR director and editor of the the ENSSER, GMWatch, Earth Open Source and GMO Seralini sites–Hilbeck writes:

…all these current battle around Glyphosate or neonics are collateral battles for being to run that industrial system and its profits for the input industries out to the extent possible and then go to another planet….

Hilbeck was born in Germany. She studied agricultural biology at the University of Hohenheim, Germany, and received her doctorate in entomology from the North Carolina State University. From 1994 to 1999 she worked as a project leader at Agroscope, a Swiss Agricultural Research Center Zurich in Switzerland. Since 2000, she has worked as a lecturer and researcher at the Institute of Integrative Biology at ETH Zurich.

Hilbeck has helped to organize and moderate workshops on GMOs in Nairobi, Brazil, Thailand and Vietnam. Here are some of the workshops that she has played a key role in organizing:

Hillbeck main research fields are biodiversity and nontarget effects of transgenic plants; the consequences of gene flow and introgression of transgenes; post-commercialization monitoring concepts for transgenic plants; coexistence of agricultural production systems with and without transgenic plants; and environmental risk assessment and international capacity building, particularly in Brazil, Kenya, and Vietnam.

Hilbeck regularly appears at anti-GMO campaigns to speak about her research. She has published over 80 studies, articles, and book chapters, according to Researchgate.

Most of her publications serve to denounce genetically modified foods. In August 2016, she published an article that criticized a letter written by 110 Nobel laureates which called on Greenpeace and others to cease protesting life-saving Golden Rice. In the article, Hilbeck and co-author Hans Herren, claimed, “What is missing in the letter and among the supporters and developers of GMOs is the recognition and scientific analysis of some tough facts.”

Hilbeck has connections to Testbiotech, an anti-GMO organization in Germany. She is also a member of the Committee for Independent Research and Information on Genetic Engineering (CRIIGEN), an organization set up by French biologist and anti-GMO activist scientist Gilles-Éric Séralini [Read GLP profile of Gilles-Éric Séralini here], who is its chair and president. It is mostly financed by organic advocacy groups and natural products producers.

On Séralini, whose research claiming that GMOs and glyphosate are unsafe has been widely challenged by the scientific community. Hilbeck has commented, “I am very scared about these results.” She told Tages Woche in November 2012, shortly after his rat study was published:

I take [Séralini’s study] seriously. Attacks on scientists who highlight risks of GM plants are normal…Now they’re pointing the large caliber weapons at Séralini, because his feeding study focused on the health of animals, which in turn serve as a model for humans.

Séralini’s study was later retracted and republished in the predatory open source pay for play journal Environmental Sciences Europe. Hilbeck has stood by her support of his work.

Angelika Hilbeck, ostensibly [a researcher] from the Swiss Federal Institute of Technology, but seemingly everywhere that an anti-GMO campaign can be found….This single person seems to represent a lot of people, using Testbiotech as a campaign base.