Michael Pollan is a journalist and advocate of organic and mostly vegetarian diets for health, environmental, and socio-economic reasons and is a sharp critic of what he calls “industrial agriculture,” including the use of genetically modified crops. He is seen as an important intellectual leader of the pro-organic food movement.

He was featured in a PBS special In Defense of Food that aired on December 29th 2015. In it, Pollan discussed the damages he believes are being done to American health by the industrial western diet. Pollan will also star in a four episode docu-series on Netflix, titled Cooked, which will focus on many of Pollan’s long held anti-modernization ideals. The series is set to debut February 19th, 2016.

He is the author of several best sellers, most notably the 2006’s The Omnivore’s Dilemma, which the New York Times named on of the best 5 books of the year, and 2008’sIn Defense of Food: An Eater’s Manifesto. Pollan has also appeared on screen in a co-starring role in the 2008 Academy Award nominee documentary Food, Inc. The film and his books explore the industrialization and corporatizing of agriculture and food production through examining practices related to both livestock and crops.

Pollan is often asked to act as an analyst on food issues, including crop biotechnology but he says different things to different audiences, appearing to cautiously endorse the safety of GMOs to one, but when talking to journalists or public audiences that are openly hostile to GMOs, he is far more critical of biotechnology.

In a 2013 interview with Grist’s food editor, Nathanael Johnson, Pollan projected a moderate tone on GMOs, “I’m a skeptic, and I’m critical of the way the technology [GMOs] has been developed and deployed and what it’s done to American agriculture, but I don’t think the technology itself is intrinsically evil.” Later that year he reiterated this belief to NPR, stating, “I haven’t seen any evidence that’s persuaded me that there’s any danger to health [from GMOs].”

Yet his response to similar questioning varies substantially when speaking to an “organic-friendly” audience. During an interview with John Robbins— an anti-biotech campaigner—Pollan revealed that he wrote anti-GMO food articles for the New York Times without any required balance from his editors:

“The media has really been on our side for the most part. I know this from writing for the New York Times where Ive written about a lot of other topics, but when I wrote about food I never had to give equal time to the other side. I could say whatever I thought and offer my own conclusions. Say you should buy grass feed beef and organic is better, and these editors in New York didn’t realize there is anyone who disagrees with that point of view. So I felt like I got a free ride for a long time.”[1]

Michael Pollan was born in 1955 and grew up on Long Island, New York. He is the son of author, lawyer and “high-priced” financial consultant Stephen Michael Pollan and gourmet and New York Magazine columnist Corrine Elaine Staller “Corky” Pollan. One of his sisters is actress Tracy Pollan, who is married to actor Michael J. Fox. Pollan has two other sisters Lori and Dana. Pollan lives in the Bay Area with his wife, the painter Judith Belzer, and their one son.

Pollan received a bachelor’s degree in english from Bennington College in Bennington, Vermont and a master’s degree in english from Columbia University in New York City. Pollan on several occasions, including during the opening of his PBS special and the interview with John Robbins, has described that his lack of education in the sciences is actually a benefit for him when discussing and writing on issues like food and nutrition..

In 2003, Pollan was appointed the John S. and James L. Knight Professor of Journalism at University of California Berkeley’s Graduate School of Journalism, and the director of the Knight Program in Science and Environmental Journalism. In addition to teaching, he lectures widely on food, agriculture, health and the environment.

Outside of print and film, much of Pollan’s advocacy work has been through social media. He has received a high degree of criticism for promoting on Twitter discredited studies or studies that have appeared in non-reputable journals. On Twitter, Pollan has (as of January 2016) almost half-a-million followers. In 2012, Pollan showed support on Twitter for a highly criticized study, including by some anti-GMO activists, done by Giles-Eric Séralini a French scientist who has produced several highly criticized papers on biotechnology. The study was later retracted.

He has also supported the opinions of an organization known as the European Network of Scientists for Social and Environmental Responsibility (ENSSER), which is an openly anti-GMO organization founded by Séralini and other campaigning scientists. When they, in 2013, issued a statement claiming that the scientific consensus on GMOs does not exist, Pollan tweeted to help spread their message: 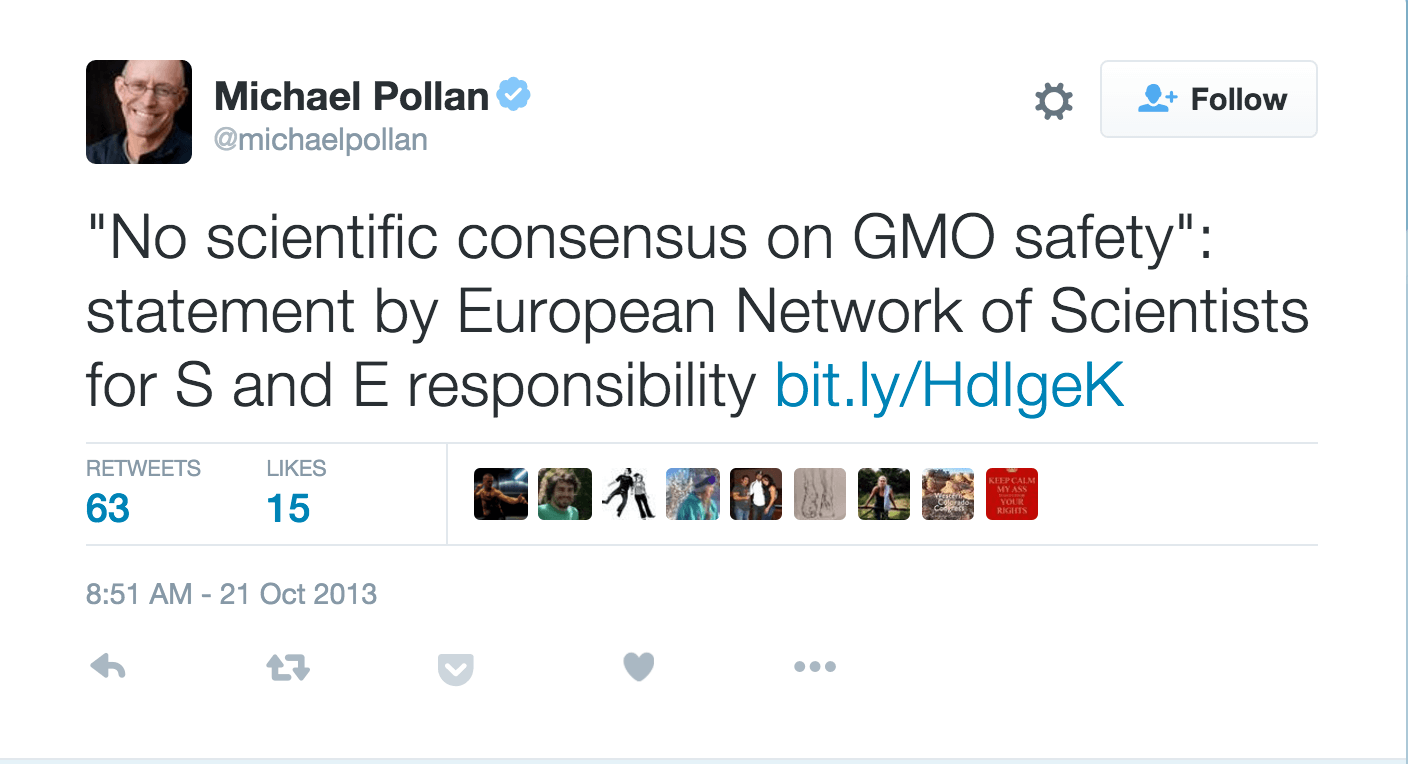 Pollan was also one of the first anti-GMO activists, along with other ‘reputable’ media sources like NaturalNews.com to promote the notorious findings by Australian researcher Judy Carman that alleged, in contradiction to numerous mainstream studies, that GMO corn caused irritation in pigs—claims since dismembered by a slew of scientists and journalists. 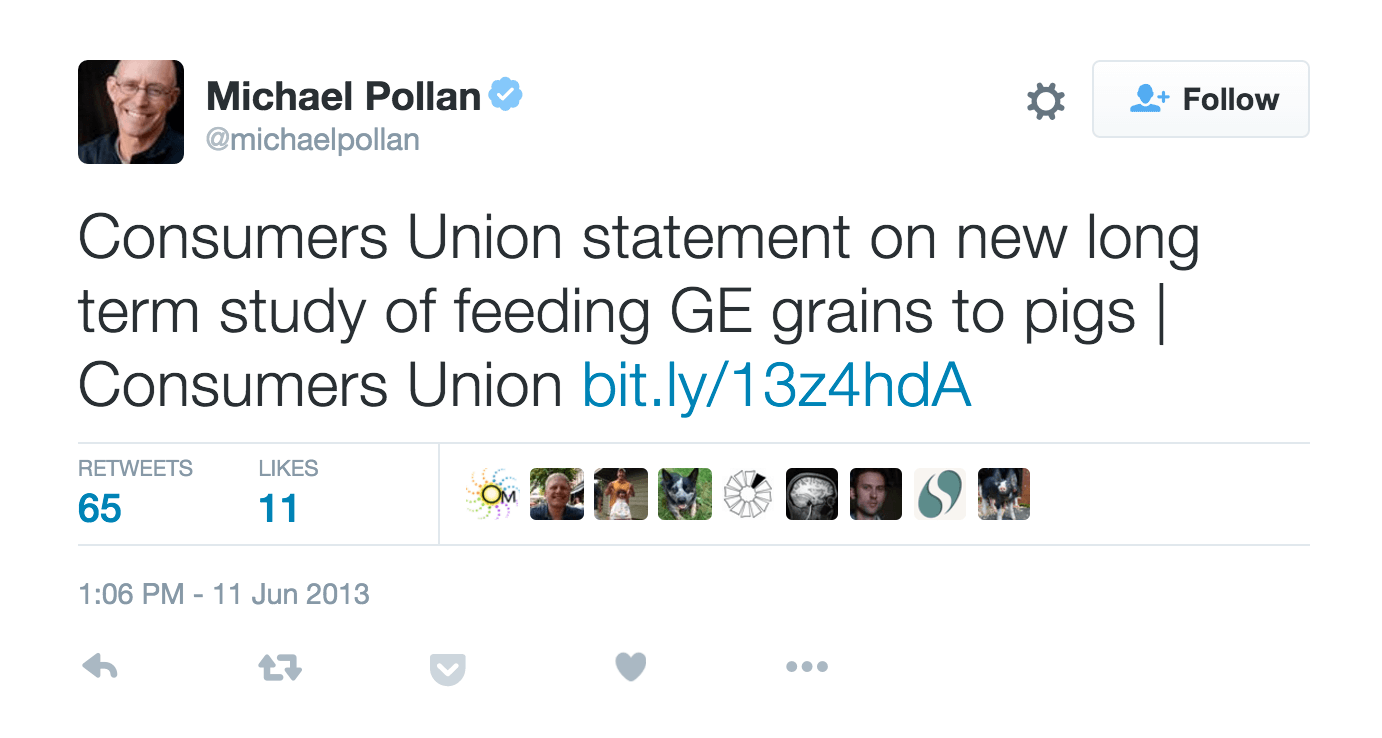 Almost weekly, Pollan can be found hawking one anti-GMO study or alarmist NGO claim on Twitter. 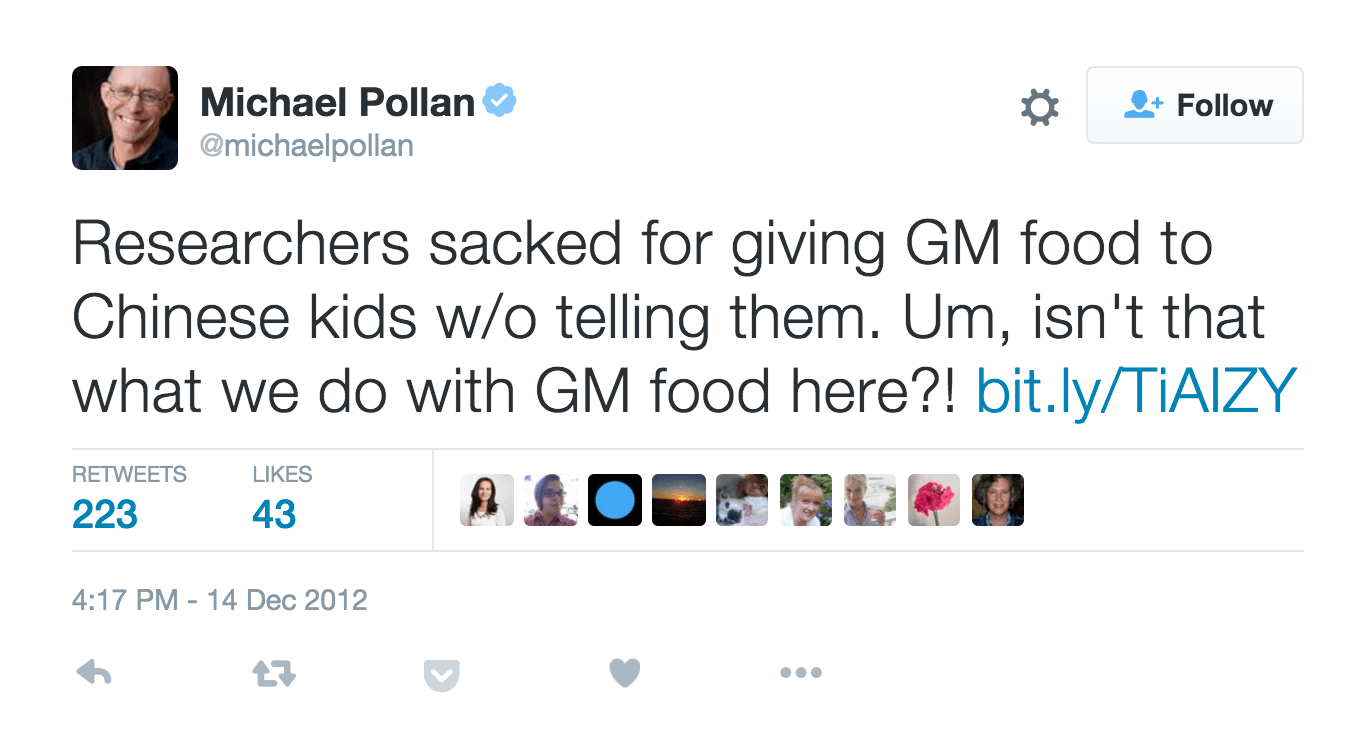 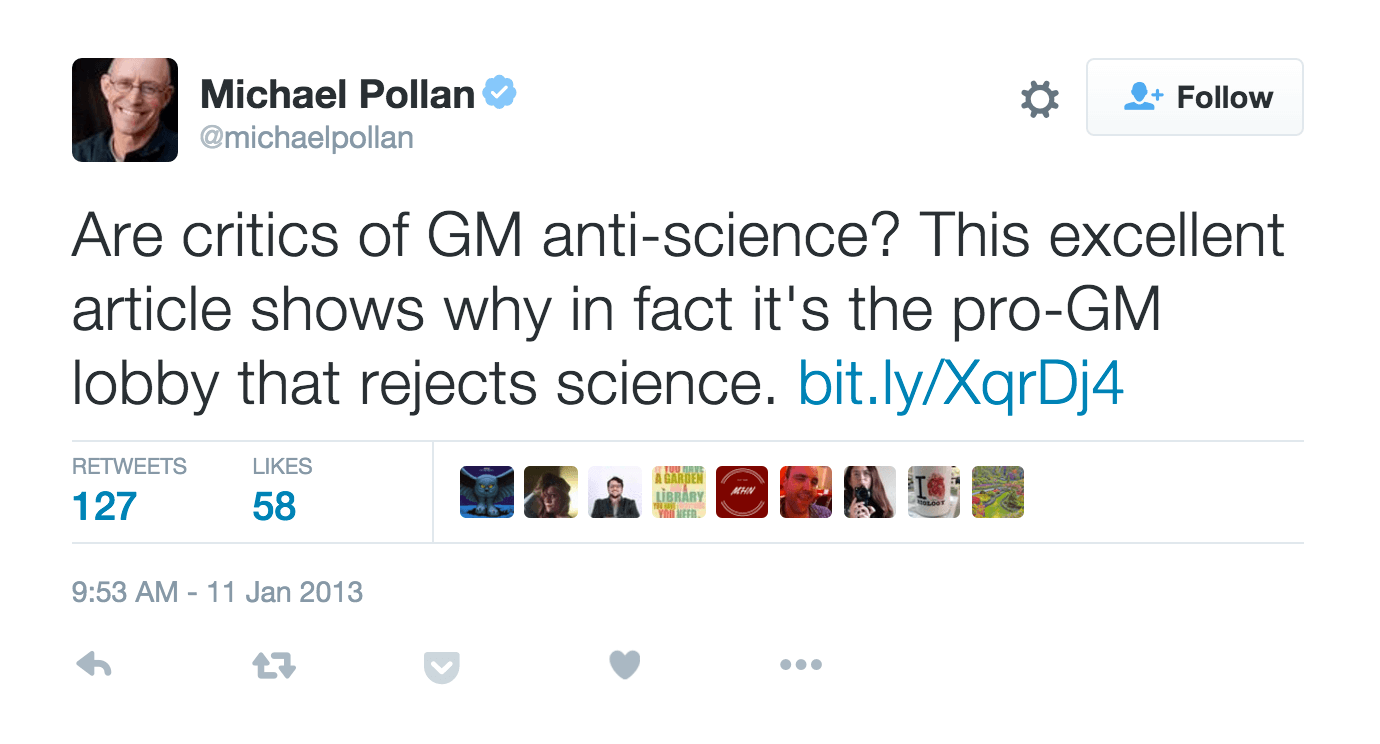 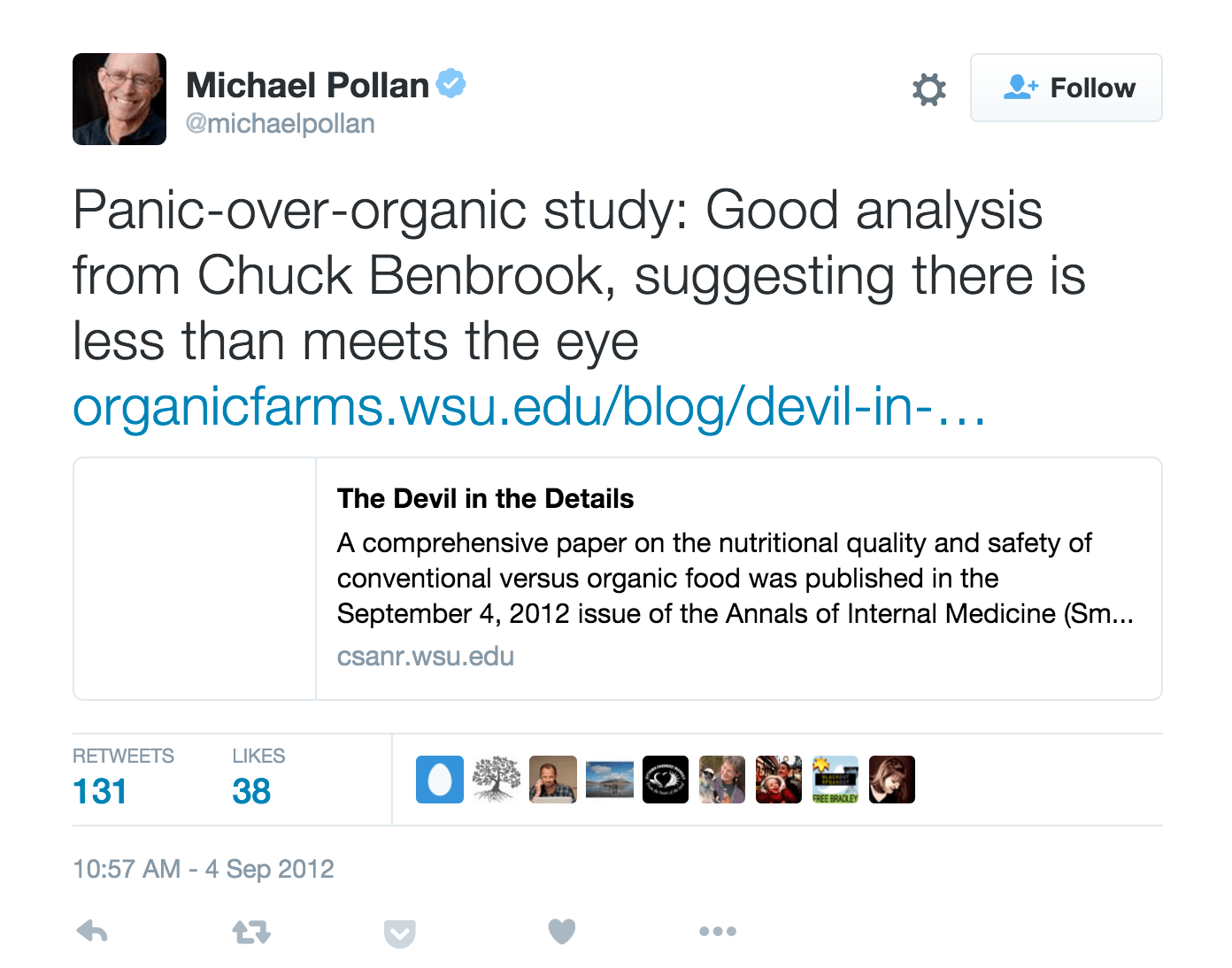 The Benbrook emails describe a long list of organic-friendly journalists and personalities and Pollan’s name is not only on this list, he receives special mention as a member of the industry’s “A-team.” The documents describe the A Team: 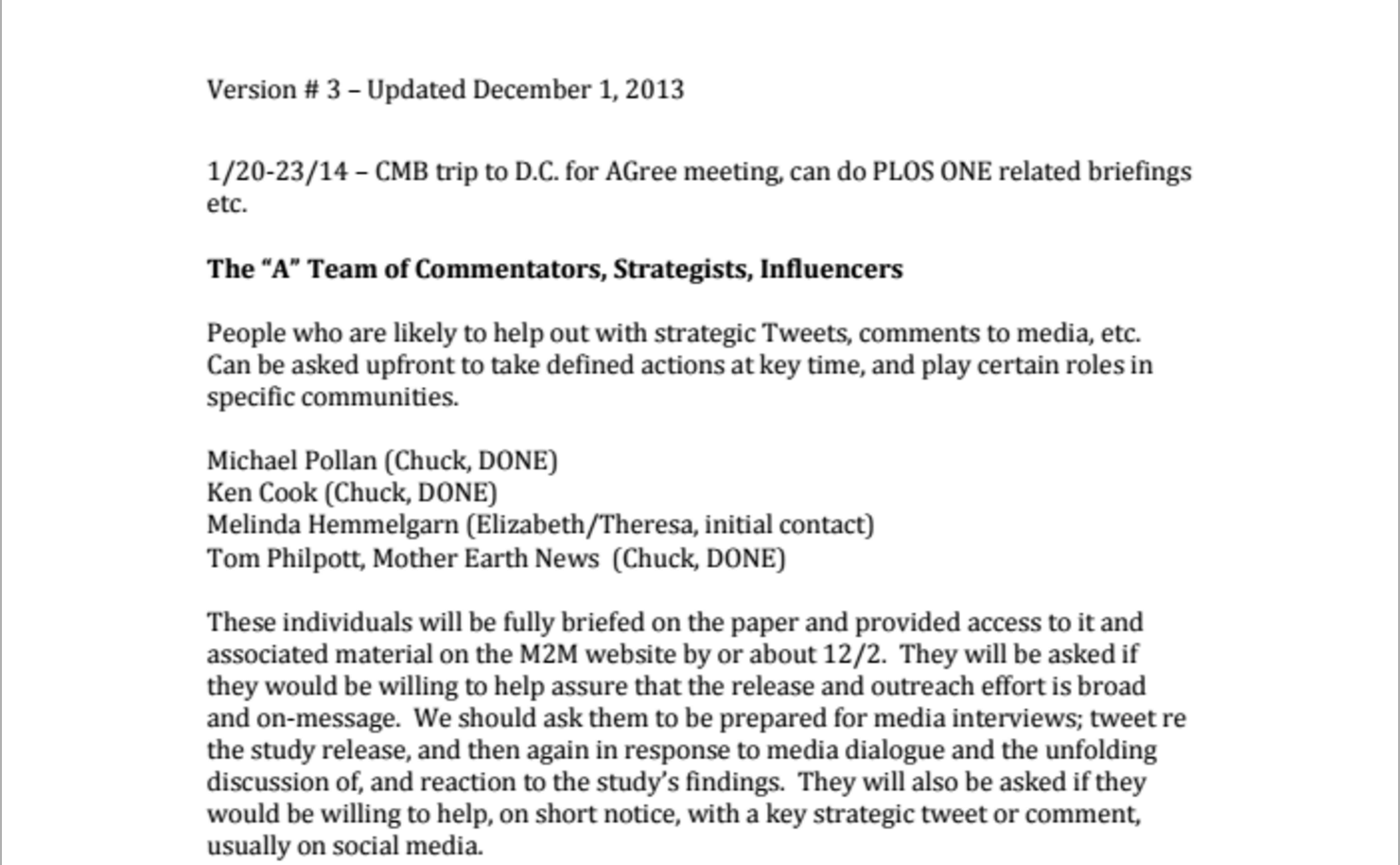 The FOIA documents showed that these interactions go beyond industry or science leaders pitching the occasional story to a journalist. The emails also reveal him as a key media consultant for industry leaders like David Bronner (of Dr. Bronner’s soaps). These are the types of industry over-reach that Pollan has criticized throughout his career.