Tom Colicchio (born 1962) is a restaurateur and “celebrity” chef. Colicchio is also a vocal opponent of genetically modified foods. He partners with anti-GMO advocacy groups to promote organic foods and criticize conventional agriculture, which he claims uses too ‘potentially dangerous’ chemicals. He has not responded when critics point out that organic agriculture extensively uses chemicals.

Colicchio co-founded the Gramercy Tavern in New York City, and formerly served as a co-owner and as the executive chef. He is also the founder of Craft and Colicchio & Sons restaurants. He is the recipient of five James Beard Foundation Medals for cooking accomplishments. He has been the head judge on every season of the Bravo reality TV show Top Chef. Colicchio has been a featured chef on Great Chefs Television. Colicchios is a “parnter” with the Environmental Working Group who opposes GMOs and promotes organic alternatives. On February 18, 2015, MSNBC announced that he will be the outlet’s first food correspondent.

Colicchio has no formal training or education beyond high school. At age 17, Tom made his kitchen debut in his native town of Elizabeth, New Jersey, at Evelyn’s Seafood Restaurant and worked and trained at various restaurants in New York such as The Quilted Giraffe, Gotham Bar & Grill, Rakel, and Mondrian.[2]

In July 1994, Colicchio and his business partner Danny Meyer opened Gramercy Tavern in Manhattan’s Gramercy Park neighborhood. In 2001, Colicchio opened Craft one block south of Gramercy Tavern. He has since opened Craftsteak at the MGM Grand in Las Vegas (2002), Craft and Craftbar in Los Angeles (2007; 2009) and Craftsteak at the MGM Grand at Foxwoods (2008). Colicchio opened his first ‘wichcraft – a sandwich shop rooted in the same food and hospitality philosophies as Craft – in New York City in 2003.

Today ‘wichcraft has 15 New York City locations, as well as locations at the MGM Grand in Las Vegas and the Westfield Center in San Francisco. In 2010 Colicchio opened Colicchio & Sons in New York. In 2012 he opened the restaurant at Topping Rose House, a new inn he is operating in Bridgehampton, New York. Tom Colicchio’s Heritage Steak at The Mirage in Las Vegas opened in August 2013.

He claims, “We use only high quality, fresh, healthy ingredients from small family farms and other specialized venues to make every dish burst with flavor. 90% of ingredients at our restaurants are organic. When you work with food every day, you look for the best out there. Organic food is produced without the use of potentially hazardous synthetic chemicals like artificial preservatives, colors, flavors, fertilizers, antibiotics, growth hormones, genetically modified seeds (GMOs) or pesticides.”[3]

Since 2006 Collichio has appeared as the head judge on Bravo’s hit reality cooking series “Top Chef.” The Emmy-winning show is currently in its 11th season. He also appears in and served as executive producer on A Place at the Table, Participant Media’s documentary about food insecurity in America, produced and directed by Kristi Jacobson and Colicchio’s wife, Lori Silverbush. 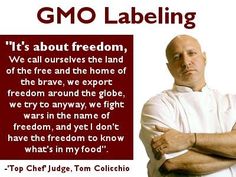 and conventional agriculture (including pesticide use) while promoting organic alternatives. EWG claims, “We couldn’t be more proud to have a partner like him in our fight for access to healthier, toxin-free food for our families.”[4] He considers himself a “food activist” who demands labeling of GMOs.[5]

Colicchio has also criticized the use of antibiotics in animal agriculture promoting a the Food Policy Action scorecard.[6]

In interviews he has recommended people stop eating fast food and anything with corn to avoid GMOs.[7] He claims his restaurants are 90% organic and about his support he says, “If you think about the organic movement, it actually started back in the 60s by activists who opposed the use of pesticides. People started to realize that chemicals like DDT, Agent Orange etc are dangerous for the environment, capable of inflicting horrible damage to the body, and the movement took off from there. Nowadays, we have entirely organic stores and more and more farmers are growing healthy produce. We need the farmers that are doing this. There’s a certain connection they have and a certain passion they have for it and we absolutely share that passion. Our restaurants buy a lot of food from the local farmers and this is how we support them.”[8]

Colicchio was one of 700 chefs who signed a petition to Congress to label GMO foods in December 2014. The petition supports legislation sponsored by Sen. Barbara Boxer, D-Calif. and Rep. Peter DeFazio, D-Ore.

“As a chef and father, I want to know what I’m serving my customers and kids, and the majority of Americans want honest information about the food on their tables,” said Chef Colicchio, owner of Craft Restaurants and co-founder of Food Policy Action. “Having honest, clear labeling of the foods we eat is a fundamental right, one that’s worth fighting for.”

Colicchio and other chefs were joined by advocates from Food Policy Action, Environmental Working Group, Center for Food Safety, Just Label It and other national organizations to meet with lawmakers in December 2014. Some chefs who took part in lobbying include: Art Smith, a former personal chef to Oprah, Sam Talbot, a semi-finalist on Top Chef, José Andrés, an internationally recognized Spanish American chef, Cathal Armstrong, an Irish chef honored by President Barack Obama as a “Champion of Change” for his work bringing nutritious foods to schools, William Dissen, Asheville, N.C. chef who has also been outspoken about sustainable seafood, Michel Nischan, a two time James Beard award winner and president of Wholesome Wave Foundation, and Hugh Acheson, a former competitor on Top Chef who is now a judge.