The first potential cases of diabetes were recorded in ancient Egypt and ancient Greece, and a search for the etiology of the disease has gone on ever since.

About one in 20 cases of diabetes in the United States is referred to as type 1, where the pancreatic islet cells (β-cells) have been destroyed, and so cannot appropriately produce insulin (leading to hyperglycemia). Heritability has always been a suspected factor, and a link between a virus and type 1 diabetes has been suggested at least as far back as the 1960s.

A new meta-analysis (26 studies) on the potential viral basis of type 1 diabetes was conducted to answer a few specific questions. Particularly, the researchers of this study cited other research that seems to indicate that genetic heritability doesn’t tell the full story of type 1 diabetes, because there has been an increase in cases of type 1 diabetes, especially in children under the age of 5. Numerous viruses have been investigated for a link, including enterovirus, rotavirus, herpesvirus, cytomegalovirus and endogenous retroviruses.

The strongest association found was with type 1 diabetes and enterovirus, which is a virus that enters the body through the gastrointestinal tract and thrives there, often moving on to attack the nervous system. 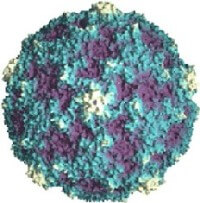 The polio viruses are enteroviruses. Enteroviruses are second only to the “common cold” viruses, the rhinoviruses, as the most common viral infectious agents in humans. They cause an estimated 10-15 million or more symptomatic infections-a-year in the United States. The researchers reviewed results of studies that used both molecular and immunological assays on enteroviral infections and found that “compared to patients without diabetes, the presence of enteroviruses was fourfold higher in patients with diabetes-related autoimmunity and 10-fold higher in patients with type 1 diabetes.”

I think it’s important to calibrate your ability to appraise the difficulties the researchers faced when determining how strong this association is: Either an enterovirus infection causes the development of type 1 diabetes, enterovirus infection accelerates the destruction of β-cells in individuals in whom it’s already occurring; or enteroviruses are simply found in individuals with type 1 diabetes because they are more susceptible to infection. Showing that there is a virus:diabetes association is different from claiming that a virus is the cause of type 1 diabetes.

Other researchers have found that interferon is activated before the initiation of islet-cell autoimmunity and also that an increased frequency of infections has been observed before the development of autoantibodies. This is interesting evidence showing that the enterovirus often precedes the development of type 1 diabetes, and doesn’t just appear along with it (co-morbid). The authors of this newest paper also note, “against the backdrop of a genetic predisposition to autoimmunity viral infections can, in some individuals, be causal in development of T1D [type 1 diabetes].” This is a powerful statement and a giant step to further understanding the causes of type 1 diabetes, as well as allowing us to develop better treatments.

Ben Locwin, PhD, MBA is a Contributor to the Genetic Literacy Project and is an author of a wide variety of scientific articles for books and magazines. He is also a researcher and consultant for a variety of industries including behavioral and psychological, food and nutrition, pharmaceutical, and academic. Follow him at @BenLocwin.