Marc Brazeau | October 8, 2014
This article or excerpt is included in the GLP’s daily curated selection of ideologically diverse news, opinion and analysis of biotechnology innovation.

For those concerned about Consumer Reports steady slide into promoting pseudoscience, a visit to CR headquarters by celebrity doctor Mehmet Oz should be cause for alarm.

The Genetic Literacy Project has obtained a Consumer Reports in house memo announcing a visit in May 2014 to CR headquarters for an “off the record” event. A number of CR staffers have appeared on the Dr. Oz show, including Michael Hansen, who has faced intense criticism for spreading misinformation about crop biotechnology, and the visit seems designed to cement that relationship. Time was scheduled for Dr. Oz to learn more about CR’s testing and take part in a discussion with staff facilitated by Urvashi Rangan, Consumers Union senior staffer who has worked closely in the past with Oz’s team on various issues. 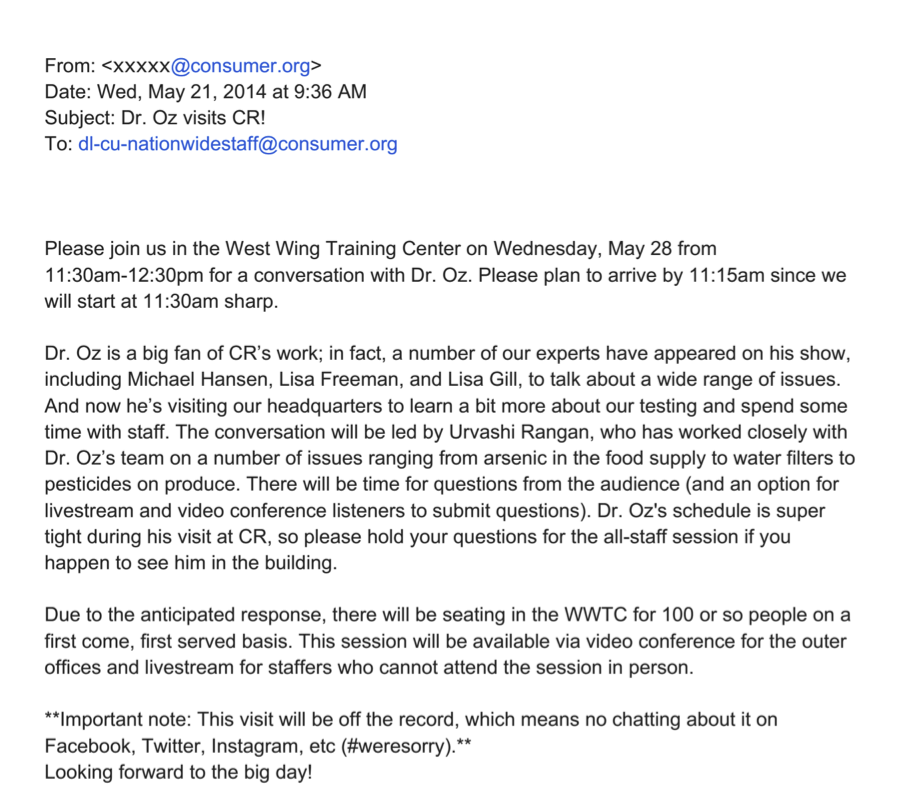 The memo was passed on to us by a former senior editor who parted ways with CR after getting “fed up with the woo”. ‘Woo’ refers to pseudoscience, magical thinking, or quackery.

Dr. Oz was recently dressed down during a Senate hearing for his promotion of bogus diet products. Oz was held up as the power driving many of the fraudulent ads, even as he argued he was himself the victim of the scammers.

“I don’t get why you need to say this stuff because you know it’s not true,” Missouri Sen. Claire McCaskill, a Democrat who chairs a Senate subcommittee on consumer protection, said at the hearing. “So why, when you have this amazing megaphone…why would you cheapen your show by saying things like that?” Oz plays a role in perpetuating scams, McCaskill said.

The GLP has reported on recent examples of Consumer Reports getting the science wrong on GMOs. Many subscriptions were cancelled in August as they advised readers to avoid soy milk unless it was certified organic or GMO-free:

The most egregious CR scandal is its bonehead dissing of GMO soy milk. Upwards of 94 percent of the US soy crop is GMO so it’s no surprise that your favorite edamame or your morning glass of soy is made from soy beans designed to be grown with fewer insecticides (Bt soy) and less toxic herbicides. (herbicide resistant soy). In its “Cons” section, CR encourages consumers to “Look for brands with the USDA organic seal or the non-GMO verified label.”CR soy milk GMO

But why? It never explains, and based on CR’s stated intention to rely on evidence to form its judgments, it’s violating its own guidance. After all, there is not one published study that suggests that GM soy products are any less nutritious than alternatives; nor are they, or any approved GMO food, harmful in any way. In fact, it’s well established that organic products, including soy milk, are more likely to have a higher risk of pathogen contamination. The fact that anti-GMO activists have scared people into seeking alternatives to GMO products should not be enough to classify GMO soy in a negative light–if Consumer Reports stood behind science rather than endorsing the latest misguided trend.

This is not the first time that activists have brandished their anti-science club to squash empirical based thinking on the issue of soy milk. In 2009, Dean Foods, owner of the Silk Soymilk brand, faced a barrage of criticism from food activists when it switched from organic to conventional soybeans, calling it their “natural” line—which was correct. The move was actually done for the best of reasons. Most certified organic soybeans are sourced from countries with low or non-existent labor standards; the switch to conventional soy means that workers would not be exploited to satisfy Silk Soymilk customers.

More recently, they mangled the science when reporting on GMO corn found in corn chips labeled “No GMOs”:

The mislabeling alert is of value to those consumers who are more concerned that they are eating chips made from GE corn than they are worried about eating junk food. But CR does nothing to dampen that hysteria surrounding GMOs and in fact goes off the science rails by frightening consumers about GMO safety:

There haven’t been sufficient studies done to determine whether there are long term health risks for people consuming GMO foods. But some animal studies suggest that eating genetically engineered crops such as corn may have effects on the immune system, kidneys and liver. More research is needed.

This is just wrong. There have been plenty of long term term studies on the health effects of GE crops. As GLP’s Jon Entine noted in his recent talk to the National Academy of Sciences, an updated review published last December of 33 studies—17 long-term and 16 multigenerational (from two to five generations)—by a team of scientists including Chelsea Snell and Agnès Ricroch found, “Results…do not suggest any health hazards…and there were no statistically significant differences within parameters observed. …The studies reviewed present evidence to show that GM plants are nutritionally equivalent to their non-GM counterparts and can be safely used in food and feed,” the researchers added.

The animal studies that CR references which supposedly hint at health concerns have all been discredited for poor design and not one has seen its data replicated–a basic hallmark of good science. There really isn’t an scientific basis to believe that food made from GE crops would pose any unusual health issue. There simply isn’t a biological hypothesis to test as to how GE crops might cause harm or pose more risks than conventional crops.

We’ve had to expose Dr. Oz’s pseudoscience as well. As GLP’s Jon Entine reported in Forbes two years ago, in “Malpractice On Dr. Oz: Pop Health Expert Hosts Anti-GM Food Rant; Scientists Push Back”, the Harvard-trained physician has consistently been one of the most aggressive promoters of anti-GMO hysteria, with nearly a dozen shows featuring a Who’s Who of fringe activists, including Mike Adams, the quack publisher of NaturalNews, considered one of the leading ant-science websites in the world–an appearance that Discover blogger Keith Kloor characterized as a new low, even for Dr. Oz.

His misrepresentations on the risks posed by the herbicide 2,4-D, addressed in a recent program, further, eroded Oz’s credibility. However, those were small potatoes compared to the whoppers reported on by Kavin Senapathy in a GLP feature:

With dramatic music in the background, Dr. Oz gave an over-simplified explanation of GMOs as being created only for pesticide-resistant traits. He lamented that because of superweeds evolving to resist regular glyphosate (the pesticide commonly known as Roundup), new pesticides are required. The question at hand in the episode was whether the EPA should approve the pesticide Enlist Duo.

The first guest was the founder of Moms Across America, Zen Honeycutt. With a very dire expression she stated, “not only are GMO foods sprayed with pesticides, but non-GMO foods are as well.” She continued by implying that organic foods are pesticide-free saying, “we went not only GMO free but organic, to avoid pesticides.” This is patently false; organic farmers do, in fact, use pesticides on their crops.

Ms. Honeycutt proceeded with an obviously embellished if not totally fabricated story. She claimed that her son had been experiencing autism symptoms. Because her doctor saw no reason to test him for glyphosate levels, Honeycutt used a private lab which detected glyphosate levels “8 times higher than found anywhere in Europe urine testing.” Unfeasibly, she claimed that within six weeks of going “completely GMO-free and organic, his autism symptoms were gone and the level of glyphosate was no longer detectable.”

Make no mistakes – this is utter hogwash. There is no known cure for autism. If it were as simple as avoiding GMOs and pesticides, the affected foods would have been recalled. Furthermore, dietary treatment of autism has no basis in scientific evidence. If and when recommended, dietary approaches are based on adjustment of vitamin and mineral levels, or on avoiding allergens. Elimination of GMO foods is not a recommended dietary approach.

It’s not just on the topic of GMOs and pesticides that Oz has gone of the rails. In a profile from last year, The New Yorker asked the question, “Is the most trusted doctor in America doing more harm than good?”. Science writer Michael Specter described the crux of the Dr. Oz money-making operation:

Most days, Oz mines what he refers to as his go-to subjects: obesity and cancer. But both the show and his Web site concentrate on the type of weight-loss plans more commonly found on infomercials in the middle of the night: “Dr. Oz’s Three-Day Detox”; “Eat Yourself Skinny”; “Oz-Approved Seven-Day Crash Diet”; “Stairway to Skinny Workout.” Cancer, Oz told me, “is our Angelina Jolie. We could sell that show every day.” Typical themes have included “Five Fast-Moving Cancers”; “Four Body Pains That Could Mean Cancer”; “Three Cancer-Preventing Secrets”; and “What You Can Eat to Defeat Cancer.” Last year, in a show about weight loss, Oz introduced raspberry ketones, an herbal supplement, as “the No. 1 miracle in a bottle to burn your fat.” That set off a wave of panic buying throughout the nation. The supplement quickly vanished from the shelves of health-food stores. Oz told his audience that the product regulates the hormone adiponectin, which could help teach the body to be thin. But the only relevant research he cited had been conducted on laboratory rats and cell cultures—not on humans.

A similar buying frenzy followed his embrace, a few months ago, of “the miracle” of green coffee beans. “You may think that magic is make-believe,” Oz said at the beginning of the show. “But this little bean has scientists saying they have found a magic weight-loss cure for every body type. It’s green coffee beans, and, when turned into a supplement—this miracle pill can burn fat fast. This is very exciting. And it’s breaking news.”

None of those assertions turn out to be accurate.

The fact that Consumer Reports is hitching it’s wagon to operators like Dr. Oz should be a serious cause for concern. It certainly diminishes the venerable reputation as a evidence based, straight down the middle consumer watchdog that they have built over the decades.

Marc Brazeau is a writer and editor for the Genetic Literacy Project. Follow Marc on Twitter @realfoodorg