An end to fat shaming? The 50 year DNA mystery of metabolic dysfunction may soon be solved

Mitochondria, the ‘energy factories in our cells’, are how we turn food into energy for the body. We quite literally oxidize a donut, no differently than if we were to set it on fire, and the problems related to a surge in ‘free radicals’ due to oxidation has been discussed for over 50 years, along with talk of antioxidants to try and fix it.

Obesity has also climbed over the last 50 years – American agriculture has led the world with dizzying advancements in food science and so we no longer think about starvation and cannibalism due to a ‘Population Bomb’, we think about a world of morbidly obese people because food is plentiful.

Metabolic syndrome is the group of risk factors that raise the risk for things like heart disease – it includes insulin resistance, hypertension, fatty liver and, of course, obesity. The National Institutes of Health lists five specific risk factors for metabolic syndrome, things like having a large waist, but they are really just symptoms – and medicine stopped doing symptom-based diagnosis 50 years ago also. Because obesity has overtaken smoking as the biggest risk factor for heart disease, researchers have been struggling to find out why two people can eat the same diet and not get the same disease.

The answer could be in our mitochondria. Mitochondria are strange parts of our biology – due to its two distinct structures this organelle seems to have coevolved in parasitic fashion; one organism needed protection and one needed energy and together they had outstanding evolutionary fitness and now these organelles power our bodies. When people think of DNA, they think of Watson and Crick and the genome, but what is little known is that we actually have a second genome – mitochondria has its own, and it is different than chromosomes found in the nucleus. The genome of chromosomes in the nucleus of our cells is linear, while the genome of mitochondria is circular. Nuclear DNA has 3,000,000,000 base pairs while mitochondrial DNA gets by with just 16,000.

Over evolutionary time it has been reduced so much that if there is a sequence variation, like a depletion or a deletion, our whole body’s energy system can be impacted.

A number of recent research projects have focused on therapeutic approaches to solving the energy problem. If your body is not creating energy properly, you can be tired no matter how much you eat and thus put on weight. In a mouse study, researchers have focused on why some mice got obese and then got heart disease easier than others. They found that the Ataxia Telangiectasia Mutated (ATM) protein was the culprit so they did what any curious scientist would do – they tried to do an end-run around nature.

To try and keep mice from getting metabolic syndrome, the researchers used what is called a targeted antioxidant – antioxidants are things like Vitamin E, but previous studies for 50 years have shown that just taking an antioxidant did not do much good, and diet alone certainly did not, you would have to eat 50 bags of spinach each day. The reason is because mitochondria has had a lot of evolutionary time to protect its little energy factory. You may eat a lot of spinach or carrots but that does not mean the antioxidants are bioavailable – they never get into mitochondria to fix the problems. 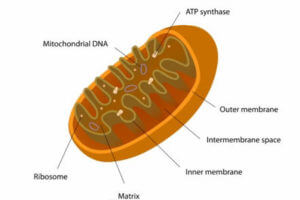 Mitochondria is not easy to break into. Image: MitoQ

The researchers used a targeted antioxidant named MitoQ, which ‘invades’ mitochondria successfully and then releases the antioxidant, on mice that were fed high-fat diets for 14 weeks. The mice on the targeted antioxidant showed lower body fat, lower cholesterol and significantly less liver damage.

What does that mean for the future? Sorry, science still has not invented a miracle pill. No matter what happens, you won’t be able to eat a pizza every night, but at least you won’t have to be annoyed that you can’t eat it at all without spending four hours at the gym the next day.