Is Nassim Taleb a “dangerous imbecile” or on the pay of anti-GMO activists?

If you think the headline of this blog is unnecessarily inflammatory, you are right. It’s an ad hominem way to deal with public discourse, and it’s unfair to Nassim Taleb, the New York University statistician and risk analyst. I’m using it to make a point–because it’s Taleb himself who regularly invokes such ugly characterizations of others.

Taleb rocketed to seer and cult celebrity status after his 2007 book on extreme risk, The Black Swan, was followed serendipitously by the 2008 global market crash and Great Recession.

Taleb has recently become the darling of GMO opponents. He and four colleagues–Yaneer Bar-Yam, Rupert Read, Raphael Douady and Joseph Norman–wrote a paper, The Precautionary Principle (with Application to the Genetic Modification of Organisms, released last May and updated last month, in which they claim to bring risk theory and the Precautionary Principle to the issue of whether GMOS might introduce “systemic risk” into the environment. Taleb portrays GMOs as a ‘castrophe in waiting’–and has taken to personally lashing out at those who challenge his conclusions–and yes, calling them “imbeciles” or paid shills.

He recently accused Anne Glover, the European Union’s Chief Scientist, and one of the most respected scientists in the world, of being a “dangerous imbecile” for arguing that GM crops and foods are safe and that Europe should apply science based risk analysis to the GMO approval process–views reflected in summary statements by every major independent science organization in the world. 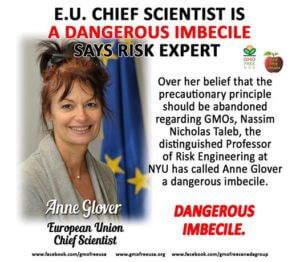 Taleb is known for his disagreeable personality–as Keith Kloor at Discover noted, the economist Noah Smith had called Taleb  a “vulgar bombastic windbag”, adding, “and I like him a lot”. He has a right to flaunt an ego bigger than the Goodyear blimp. But that doesn’t make his argument any more persuasive.

The crux of his claims: There is no comparison between conventional selective breeding of any kind, including mutagenesis which requires the radiation or chemical dousing of seeds (and has resulted in more than 2500 varieties of fruits, vegetables, and nuts, almost all available in organic varieties) versus what his calls the top-down engineering that occurs when a gene is taken from an organism and transferred to another (ignoring that some forms of genetic engineering, including gene editing, do not involve gene transfers). Taleb goes on to argue that the chance of ecocide, or the destruction of the environment and potentially of humans, increases incrementally with each additional transgenic trait introduced into the environment. In other words, in his mind genetic engineering is a classic “black swan” scenario.

Neither Taleb nor any of the co-authors has any background in genetics or agriculture or food, or even familiarity with the Precautionary Principle as it applies to biotechology, which they liberally invoke to justify their positions. That has not stopped them from making sweeping generalizations that contradict more than 2000 studies to date, many of them independently executed, indicating no unusual harm posed by GM crops; not one study suggesting potential dangers from GE crops has been published and replicated in a major independent journal.

In essence. Taleb’s ecocide argument applies just as much to other agricultural techniques in both conventional and organic agriculture. The only difference between GMOs and other forms of breeding is that genetic engineering is closely evaluated, minimizing the potential for unintended consequences. Most geneticists–experts in this field as opposed to Taleb–believe that genetic engineering is far safer than any other form of breeding.

Moreover, as Maxx Chatsko notes, the natural environment has encountered new traits from unthinkable events (extremely rare occurrences of genetic transplantation across continents, species and even planetary objects, or extremely rare single mutations that gave an incredible competitive advantage to a species or virus) that have led to problems and genetic bottlenecks in the past — yet we’re all still here and the biosphere remains tremendously robust and diverse. So much for Mr. Doomsday.

Don’t expect Taleb to engage in reasonable discourse about his unorthodox views, in public or especially on Twitter. He doesn’t believe much in dialogue, as many reviewers of his Black Swan book noted. “Taleb’s style is to severely criticize experts and authorities–lots of ‘moron’, ‘idiots’, and ‘fools’ out there–while implying that both he and his reader or listener are exempt from their many biases,” writes economist Erik Falkenstein, author of Finding Alpha.

Rather, as Kloor writes, watching Taleb spar is “like being ringside at a verbal boxing match with the intellectual equivalent of Clubber Lang, the snarling, contemptuous boxer played by Mr. T in Rocky 3. In the movie, Clubber Lang was so mean and nasty the performance was almost a parody.”

Kloor cites numerous commentators who tweeted reactions to the release of the latest iteration of his GMO doomsday paper, including risk specialist David Ropeik, which apparently loosened the straps on Taleb’s restraints. 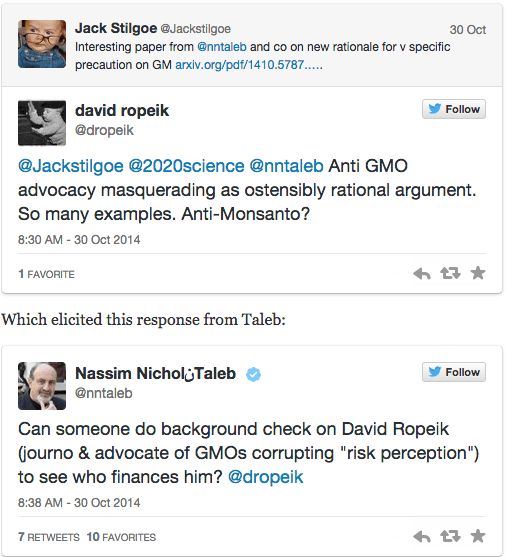 Kloor wasn’t surprised, as Taleb had targeted him months before when he requested an interview to discuss the professor’s thesis.

So much for reasonable discourse from crop biotechnology critics.