What will McDonald’s do?

The U.S. Department of Agriculture on Friday cleared a genetically engineered potato with two innovations that help both consumers and producers: The Simplot Innate potato resists bruising, which makes it more appealing to consumers (even though bruising generally does not impact the quality of the starchy vegetable); and it’s been modified to produce less of the chemical acrylamide when fried. Acrylamide has been linked to cancer in rats although there is no clear evidence that it poses harm to humans.

The Innate offers a number of safety and ecological advantages over conventional potatoes: 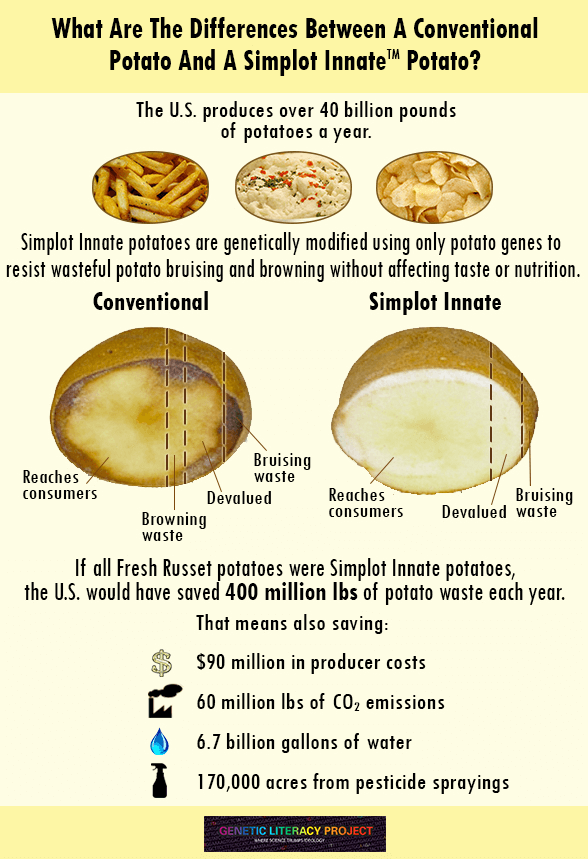 The Innate is, in theory, perfect for food giants that use a lot of potatoes, particularly fast food giants and chip companies, but history and the ongoing controversy over GMOs suggests that McDonald’s will move cautiously.

As the Genetic Literacy Project previously noted, the Innate is one of numerous GMO potatoes in development. Farmers could benefit from the results of a three-year trial on genetically modified potatoes resistant to blight released earlier this year. The results were published in the journal Philosophical Transactions of the Royal Society B  and was part of an EU-wide investigation into the potential for biotechnology to protect crops, led by scientists at the John Innes Centre and the Sainsbury Laboratory. Researchers added a gene to Desiree potatoes, from a South American wild relative of potato, which triggers the plant’s natural defense mechanisms by enabling it to recognize the pathogen.

In 1998, Monsanto introduced NewLeaf potatoes, which were engineered to repel a pest called the Colorado potato beetle. But NGOs launched a demonization campaign, persuading McDonald’s and Frito-Lay to tell their suppliers, including Simplot, not to grow the NewLeaf potatoes. Monsanto subsequently withdrew from the potato business, and the first GM potato died. This time, Simplot, a long-established power in the potato business, is the prime mover and presumably would not have moved forward without positive signals from McDonald’s and others. We’ll see.

“The potato is one of a new wave of genetically modified crops that aim to provide benefits to consumers, not just to farmers as the widely grown biotech crops like herbicide-tolerant soybeans and corn do,” notes The New York Times.

“The non-bruising aspect of the potato is similar to that of genetically engineered non-browning apples, developed by Okanagan Specialty Fruits, which are awaiting regulatory approval. These consumer focused innovations have anti-GMO campaigners on the defensive, as one of their central talking points is that GM has focused on commodity crops, like corn and soybeans.

Food and Water Watch and the Center for Food Safety (CFS) have led the attack against Innate and Arctic Apple, alleging unknown possible health risks that no study or science oversight agency has found. Neither the new GMO potato nor the nonbrowng apple were modified using so-called “foreign genes”–genes from another species. Because all life share common ancestors, scientists put no stock into “foreign gene” scaremongering, but it’s a popular talking point for anti-GMO activists.

“We think this is a really premature approval of a technology that is not being adequately regulated,” said CFS’ Doug Gurian-Sherman, adding that his group might try to get a court to reverse the approval of the potato.

Arctic apple uses what’s called an apple-to-apple transformation,” turning down the expression of the genes that turn the apple brown in a process called gene silencing–a natural process that all plants (and animals too) use to control expression of their genes. Similarly, the Innate contains fragments of potato DNA that silences genes involved in the production of certain enzymes.

“We are trying to use genes from the potato plant back in the potato plant,” Haven Baker, who is in charge of the potato development at Simplot, told the TImes. “We believe there’s some more comfort in that.” 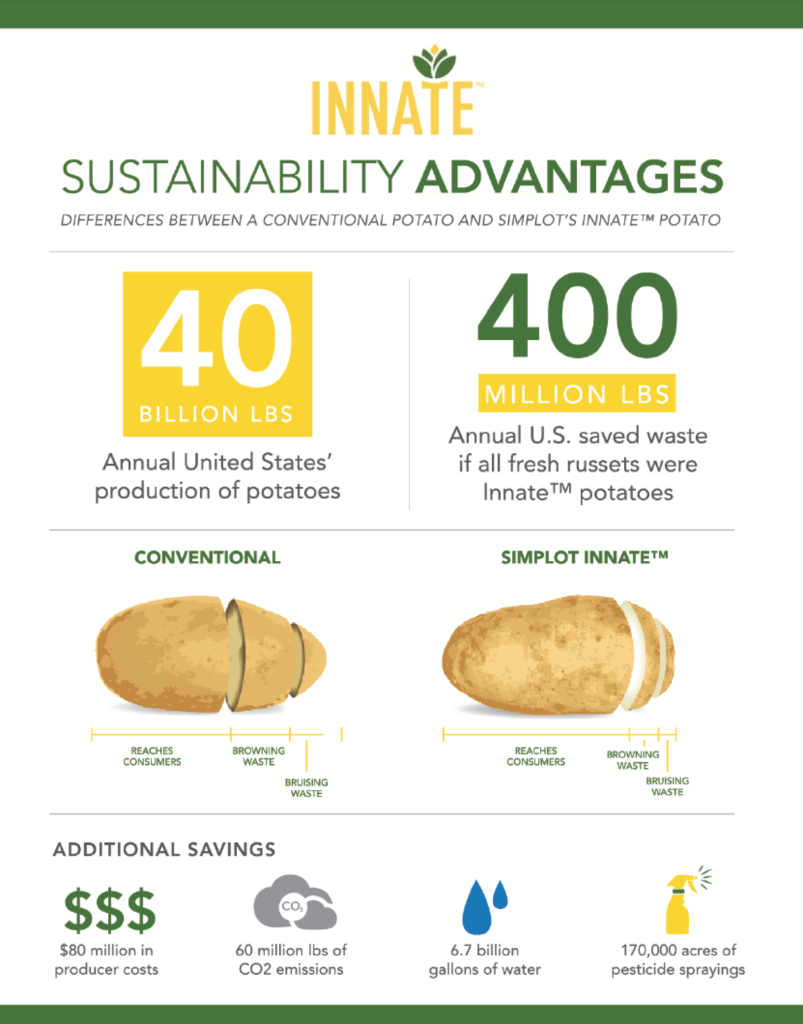