Money talks: Some farmers go non-GMO because of price premiums, not rejection of biotech

A small but growing number of Midwestern farmers in the United States are moving away from biotech seeds, drawn by the premium price non-GMO crops offer. Jim Benham, an Indiana farmer, last year, for the first time in 20 years, planted his fields entirely with non-GMO soybean seeds. And it wasn’t because he had suddenly embraced the anti-GMO movement. “I was profitable because I made the switch,” Benham said. “In our business margins are so critical that we chase a dollar anytime we can.”

Mr. Benham is among a small but growing number of Midwestern farmers moving away from biotech seeds developed by Monsanto Co., DuPont Co. and other companies in response to lower crop prices over the past two years that have slashed farm profits.

More U.S. consumers are seeking out non-GMO foods, which proponents perceive as healthier and friendlier to the environment. Retail sales of GMO-free cereal, salad dressing, eggs and other food products increased 15% to $9.6 billion last year, among the fastest-growing U.S. food segments, according to market-research firm Nielsen. Nielsen sharply increased its non-GMO food sales estimate last year after incorporating a broader range of products and stores.Fueling the trend are packaged-food companies such as General Mills and Post Holdings that have moved to strip genetically modified ingredients from some products. 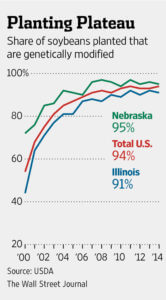 Food companies will pay extra for grain and oilseeds that are GMO-free due to the relatively small supply and the cost of separating such crops from the genetically modified versions that dominate the U.S. Farm Belt. Still, many farmers prize GMO crops because of their increased yields and ability to curb pesticide use. But with the prices for corn and soybeans falling 50 percent and 35 percent, respectively, over the last two years, many farmers are re-visiting non-GMO crops as a way to preserve profits.

“We’re seeing more interest in producing for the [non-GMO] markets than we ever have,” said Lynn Clarkson, president of Clarkson Grain Co., a company that contracts with farmers to grow non-GMO crops. “The drop in [crop] prices has put many farmers in a break-even or loss situation for the 2014 crop.” 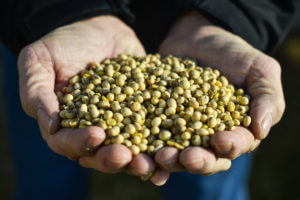 For many farmers, switching to the non-GMO crops means deploying a broader array of pesticides, some of which they say already are needed to kill weeds that have evolved to survive common herbicides like Monsanto’s Roundup. Savings on typically cheaper non-GMO seeds mostly offsets the cost of additional chemicals, farmers say.

Wendel Lutz, who farms about 500 acres near Dewey, Ill., said he has shifted his soybean fields entirely to non-GMO varieties and plans to plant more non-GMO corn this year. He said the lower-tech crops generally yielded about the same amount of grain and oilseeds as the biotech varieties. “Money talks,” he said. “I’ll be looking to do it from here on out.”