You light up my life: High tech gene applied to erectile dysfunction

Erectile dysfunction may not be a comfortable topic to discuss, but if you’re a male and old enough to know the lyrics to that song in the article title, chances are that at minimum you’ve discussed the topic with friends. More than half of men over age 60 have experienced the issue at some time. If you are faced with the scary prospect of declining sexual performance and wanted to fight nature’s decline, you’ve pretty much had one option: the blue pill.

Nearly everyone is aware of the pharmaceutical options, the most famous is slidenafil, a blue pill known by its commercial name, Viagra. There are only four other oral drugs approved by the Food and Drug Administration to fight ED: tadalafil (Cialis), vardenafil (Levitra, Staxyn) and avanafil (Stendra). All work by increasing the flow of blood into the penis so that when a man is sexually stimulated, he can get an erection.

The industry is also frantically try to develop drug options to increase the libido in females, but has not been successful so far. While the female approach targets the brain the drugs for males work simply by increasing blood flow to erectile tissue. It’s easier to tinker with mechanics than the complex brain and the knotty issue of sexual desire.

But it’s not all smother sailing for sexually dysfunctional men. While ED drugs can prolong an erection, they do not trigger it. To address that challenge, a team of Swiss research are developing a more high-tech, genetics based approach: blue light therapy that triggers a gene to stimulate sex drive. So far, it’s worked in mice and there are hopes it will soon be deployable in men as well. 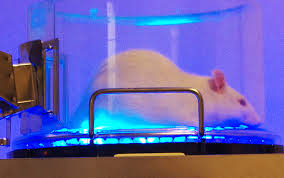 While soft candlelight, and at other moments deep red light, can put people in the mood for sex, the blue light switch for erectile gene therapy is based on a different principle. Previously, we’ve discussed gene activation triggered by human thought patterns converted to electroencephalographic (EEG) signals and then to light, a technology that’s being studied as possible treatment for various medical conditions.

The experimental approach to erectile stimulation works on the same principle, known in science as optogenetics, so it’s possible that ultimately the man’s thoughts can be used as the trigger. That’s not where the technology is quite yet, but bear it in mind, because we’ll come back to it in a little while. For now, what the researchers have done is applied optogenetics to stimulate erection in the mouse penis. Through a biochemical phenomenon known as a second messenger system, a certain gene turns on in response to intense blue light, and causes a reduction in the level of calcium inside muscle cells that surround blood vessels that supply the erectile tissue. As a result, the muscle cells relax and the blood vessels open. To get started, the gene is injected into the erectile tissue. Once that’s done, the gene stays in the muscle cells where it’s needed, and the mice get an erection whenever intense blue light is turned on.

The blue light gene therapy works very well in laboratory mice, but how could it be used in humans? Currently, the research is only in the pre-clinical stage, so all that the Swiss researches can say is that it has yet to be tested in human. But there is good reason to expect that it will work.

“The system of an erection is very similar across all mammals,” said Swiss research Martin Fussenegger, a professor at Basel’s Biotechnology and Bioengineering at the Department of Biosystems. After all, “Even Viagra works on rats. It prolongs the erection’s intensity, just as it does in humans.”

The new research raises the intriguing possibility that future therapies might be linked to altering the way the mind processes information–focusing on what might be called “mind control” genes. I’ve written previously about that exciting possibility:

While using a trio of thought patters to control gene expression for a protein in a laboratory setting may not sound like much more than a neat trick, the potential for medical applications is actually quite staggering…Far in the future, brain wave patterns might also be able to control devices such as insulin pumps for diabetes, cochlear implants, various bionics, and even heart implants, all through optogenetic interfaces.

David Warmflash is an astrobiologist, physician and science writer. Follow @CosmicEvolution to read what he’s saying on Twitter.