Pharmaceutical company Abbott Laboratories is the latest in a string of corporations bowing to consumer advocacy pressure to remove genetically modified ingredients from its products. The company has decided to sell a non-GMO version of its number one infant formula Similac Advance. The decision is being applauded by consumer activists, Green America calling it “an important advance for infant health.”

Parents are rightly concerned about the presence of GMOs in infant formula, and tens of thousands of parents took action with GMO Inside to ask Abbott to remove GMOs.

The move is surprising in that it’s in stark contrast to the position Abbott and its investors have taken against consumer groups who in recent years formally called upon the company to either remove GMOs or add product labeling.

The advocacy group As You Sow has been pushing for shareholder votes for two years, but has been shot down both times, receiving only single-digit percentage support.

While Abbott is now being accused of kowtowing to anti-GMO activist organizations that have been heaping the pressure on corporate America for GMO labeling and more, Abbott says the decision was in response to its proprietary polling and research in which it determined more than one-third of its customers prefer the non-GMO Similac version, according to a report in The New York Times. Apparently fearing a loss of market share in a highly competitive business, it gave in to the pressure from this concerned minority.

Corn and soy byproducts are key ingredients in Similac infant formula, both of which are largely genetically modified biotech crops, according to the Department of Animal Science at the University of California, Davis. 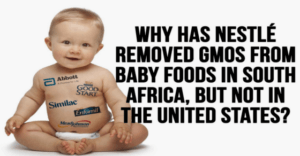 Abbott’s not the first major formula maker to remove GMOs from infant formula. Nestle, the maker of Gerber, similarly turned to non-GMO sources for its infant formula and cereals, but only in South Africa. It’s unclear whether the company will take similar steps in the United States.

In Abbott’s case the company may be sending mixed messages to the public about its stance on the GMO issue. It is shunning genetically engineered ingredients from only one of its Similac versions – Similac Advance. A non-GMO Similac Sensitive is expected to follow, according to the Times report.

Abbott is a healthcare company, which means it makes more than just infant formula. It also targets the adult community with products such as Glucerna, which is designed for people suffering from diabetes and incidentally contains dairy, soy protein and corn – all key ingredients tied to GMOs.

Abbott is also behind cholesterol drug Normolip, in which red rice – otherwise known as weedy rice — is a key ingredient. Separately, weedy rice was the subject in a 2013 study by Ohio State University Professor Allison Snow involving overexpressing “the native epsps gene in rice plants.” The result is a more resilient crop delivering higher yields without the intervention of controversial pesticides such as Roundup.

Paramount to the discussion on GMOs is the divide between the general public and the scientific community when it comes the safety of genetically engineered ingredients. For instance, according to Pew Research, nearly 90 percent of scientists surveyed – who are affiliated with the American Association for the Advancement of Science — believe GMO foods are “generally safe” to consume, more than twice the percentage of American adults who agree. And Americans have been exposed to genetically engineered products for approximately two decades.

Abbott says it’s developed the new formula to give parents options, however what the company has done may muddy the issue in the minds of its customers. Many new moms aren’t well versed on genetically engineered foods except for what they read on Facebook or see on a magazine cover.

Abbott’s decision has angered some scientists, including science moms. Layla Katiraee, a molecular geneticist, challenged the company’s motives in this blog post:

A 2013 Rutgers working paper suggests more than 50 percent of Americans surveyed know little to nothing about GMOs while one-quarter of participants considered GMO a foreign term. These same folks, however, turned around and acknowledged they are food-label readers, which means they could be directly in Similac’s marketing line of fire.

As for Abbott’s latest development, it’s certainly not the first company to ignore science and market to consumers’ emotions. General Mills recently decided to remove GMOs from its popular Cheerios brand even though it meant a reduction in the vitamin content, but the sales results have been underwhelming, according to reports.

Abbott’s approach is arguably very similar in that it’s sure to evoke an emotional response. The key difference, however, is Abbott is playing on the emotions of new mothers with newborn babies, who – for one or more of a myriad of reasons — are seeking the next best and safest alternative to breastfeeding for the first 12 months or so of their baby’s lives.

By bowing to activist pressure, Abbott is sending a message that traditional Similac Advance wasn’t good enough, which is likely to cause consumers to question other products on the market. Abbott has just placed the ball in the court of the other leading infant formula makers, Mead Johnson (Enfamil) and Nestle. It remains to be seen whether they will follow suit with non-GMO versions of their U.S. infant formulas, but if they do new moms may soon have little other choice than to support the no-GMO agenda.

If reaction from the likes of GMO Free USA is any indication, pressure will only continue to mount for the likes of Abbott and its competitors.The initiative on its Facebook page slams the company, calling on Abbott to obtain Non-GMO Project approval to ensure all sides are abiding by the same standards for GMO identification particularly as it relates to soybean oil, which the organization says is “potentially” included in the new baby formula.

Gerelyn Terzo is a freelance journalist residing in New Jersey who, in addition to the Genetic Literacy Project, has contributed to Global AgInvesting, InvestorPlace.com and The Motley Fool. Follow @gerelynbiz on Twitter.