Sports and war: When it comes to concussions, not much difference between football and fighting

Not only is the topic of concussion a major worry, but wherever there is worry there are people who translate that into money to be made. People who claim to be credentialed in concussion management are trying to capitalize on fear, but frequently have woefully-inadequate knowledge or training on the brain and brain injuries. Still, they are doing their best to capitalize on the current popular movie Concussion about the NFL’s history of ignoring head injuries, Internet and social media buzz, and sporting event replays of athletes being concussed.

There is a $300 mouth swab genetic test available which claims to prognosticate a child’s risk of concussion, but a look at the test itself shows that it is measuring genetic markers that haven’t been reliably associated with concussion risk. Instead they measure which variants of the APOE gene (pronounced ‘Ay-Poe’, which is a gene that produces a protein called apolipoprotein E) the test-taker has.. There are different versions of the APOE gene, with the most common in the population thought to be e3 (though there are also many e2 and e4).

With seeming ubiquity in athletic events, from U.S. football players (NFL) to footballers in the rest of the world (FIFA), boxers, MMA fighters, wrestlers, hockey players, skiers, rugby players, and so on, concussion and traumatic brain injury is a risk. The Mayo Clinic’s estimate of 3.9 million concussions from sports and activities occurring annually in the United States is a deep underestimate, as reporting and diagnosing have been inadequate and lagging behind the current neuroscience.

There is a recent trending hashtag (#concussion) based on the Sony Pictures movie Concussion, which was written to tell part of the story of Bennet Omalu’s research on concussion and brain injury. A Google search of ‘concussion’ brings up 27,500,000 results as of the writing of this piece.

What is traumatic brain injury and why does it matter? 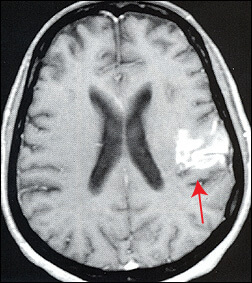 Traumatic brain injury is a nonspecific term used to describe an acute event suffered by the brain. Typically this involves some sort of impact, as is the case in sports when bodies collide or heads sustain a forceful blow. But more insidiously, TBI can be sustained by shockwaves from explosions which can jostle the brain without the body being damaged. Some of these cases have even followed soldiers who had evidence of past brain injury but who didn’t recall sustaining an injury or have typical symptoms of TBI.

The typical symptoms of TBI are: potential unconsciousness, headache, nausea, fatigue or drowsiness, dizziness, and other whole-body effects. The Department of Defense statistics for medically-diagnosed cases of TBI indicate that there have been about 327,000 soldier-cases since the year 2000. There is a tremendous impact on welfare of the soldiers themselves, the families of the soldiers, and society to rehabilitate and work with them. Fifty-one percent of sufferers of mild head injuries were reported as still having disability one year later at follow-up. The estimated cost of burden of traumatic brain injury in the United States is about $300 million. Understanding the condition, and appropriate treatments for it, can help improve our future care models.

A new psychological diagnostic has been tested for validity to observe head injuries and TBIs over time. One of the co-authors of this diagnostic test, Regina McGlinchey, is director of the Translational Research Center for TBI and Stress Disorders at a VA hospital in Boston. She also found with colleagues that a large proportion of military veterans who sustained mild brain injuries experience heightened emotionality, including potentially inappropriate laughing or crying. This condition is known as pseudobulbar affect, and is also associated with neurodegenerative diseases such as Alzheimer’s disease, ALS, and traumatic brain injury.

Two interesting aspects of this research are that these cases were classified as ‘mild’ brain injury which led to these effects, and the increased emotionality associated with pseudobulbar affect is a neurological structural condition and not in all likelihood a psychiatric condition stemming from the veterans having served in war (though those can of course be present concomitantly in the patient).

So in much of the popular literature on this topic, it’s being said that the blast exposure leads to increased ‘aging’ of the brain – but in actual fact what’s being measured is tissue integrity in the brain, which is then corresponded with different age models to make the association that ‘this particular trajectory of tissue degradation is similar to this general age bracket.’ And the loss of connections and imaging anomalies in those who have suffered blasts and TBI are indeed higher in the sample groups than in the general population. In the recent research findings, it was observed that there were significant changes in stress, anxiety, sleep quality, and ratings of post-traumatic stress disorder in those subjects who had experienced more frequent TBIs.

Whether chronic traumatic encephalopathy (CTE), traumatic brain injury (TBI), or a singular concussive event, the brain has suffered an injurious event – and this is something the public is norming around as an alarming trend. All of this is built on a long history and body of knowledge of TBI encountered by soldiers deployed overseas. Recent evidence is surfacing of ‘early aging’ in the brains of troops as a result of experiencing bomb blasts

What can physics tell us about traumatic brain injury?

If I turn to seismology to create an analog with brain injury, we could draw the following parallels: In the study of earthquake science, there are two different principal types of waves that travel through and across the Earth, Primary waves (P-waves) and Secondary (S-waves). 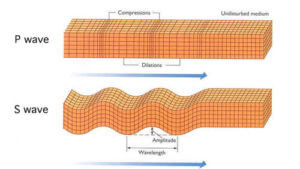 They are so-named because of the rate at which they reach seismometers independently – P-waves arrive first, and S-waves arrive second. But P-waves are also called ‘pressure waves’ because they are caused by the compression and stretching (rarefaction) of material in the Earth and can pass through the molten components of the planet as well as through the solid rock. S-waves by distinction are transverse waves of the rocky material of the Earth; They move more slowly through solid material than P-waves and also cannot pass through the liquid parts at the interior sections of

the Earth. You can see how the two wave types progress differently through the Earth during an earthquake.

The metaphor is with the head and brain trauma: Impacts to the head (blunt force trauma) will send pressure waves through the skull and into the intracranial spaces and through the brain tissue. There will also be secondary waves which travel around the soft tissue surrounding the skull and in the skull itself. Though most of these secondary waves would be expected to be damped by the cerebrospinal fluid around the brain, there would be some transverse waves that likely would conduct into regions of the brain.

There are also coup-contrecoup injuries to the brain from blunt force trauma and/or sudden deceleration (as in a car crash): These are so-named because the brain impacts (coup from French ‘to strike’) the opposite (contra) side of the interior skull from the impact and the rapid compression on the brain causes injury. These have been well-known in medical literature for a few hundred years, and are most frequently seen in boxers and those who have experience car crashes. This is mostly an intentional injury (rapid deceleration as I mentioned above) because the brain is accelerated by some force (being inside a speeding car, an impact on the head, etc.) and then it is rapidly stopped against the inside of the skull.

So in the context of blast-associated TBI, there may be pressure waves that will compress and rarefy the brain tissue (analogous to the P-waves), causing microtrauma to the neural structures, diffuse axonal injury, and potentially causing internal bleeding in the brain. This shockwave explanation may also be why mild brain injuries, or even those injuries to the brain unknown to the sufferer often occur without any concussion-like symptoms; in fact, several veterans who responded didn’t recall TBI events or particular acute blast events – it may be that the blast pressure waves could disrupt tissues and communications in the brain and set up conditions for future cognitive decline.

The more we understand the causal mechanisms and effects, the better we can develop future therapies and adapt to changing needs in treatment.

Ben Locwin, Ph.D., MBA, M.S. is a contributor to the Genetic Literacy Project and is an author of a wide variety of scientific articles for books and magazines. He is also a neuroscience researcher and consultant for a many industries including food and nutrition, pharmaceutical, psychological, and academic. Follow him at @BenLocwin.