Genetics might be able to save the world’s coral reefs

Coral reefs worldwide are suffering in part due to climate change, and according to at least one model, coral reefs could be completely extinct by the end of the century.

Ken Caldeira and Katharine Ricke, from the Carnegie Institution for Science, reported this conclusion a few years ago from projections by a computer model that predicts changes in ocean chemistry:

If we continue on our current emissions path, by the end of the century there will be no water left in the ocean with the chemical properties that have supported coral reef growth in the past. The decisions we make in the next years and decades are likely to determine whether or not coral reefs survive the rest of this century.

The researchers also stated that the reefs would be able to sustain themselves only if emissions are curtailed soon and carbon dioxide is somehow captured from air. The production of more carbon dioxide is inhibiting the ability of these reefs to build and maintain their skeletons. Most scientific and political solutions have aimed at reducing carbon production, but another, perhaps even practical solution, may come from genetic modification.

Corals are important sources of biodiversity, as the National Oceanic and Atmosphere Administration (NOAA) explains:

Coral reefs are some of the most diverse and valuable ecosystems on Earth. Coral reefs support more species per unit area than any other marine environment, including about 4,000 species of fish, 800 species of hard corals and hundreds of other species. Scientists estimate that there may be another 1 to 8 million undiscovered species of organisms living in and around reefs

These systems have both economical and medicinal value to humans, as NOAA explains:

This biodiversity is considered key to finding new medicines for the 21st century. Many drugs are now being developed from coral reef animals and plants as possible cures for cancer, arthritis, human bacterial infections, viruses, and other diseases…

Healthy reefs contribute to local economies through tourism. Diving tours, fishing trips, hotels, restaurants, and other businesses based near reef systems provide millions of jobs and contribute billions of dollars all over the world. Recent studies show that millions of people visit coral reefs in the Florida Keys every year. These reefs alone are estimated to have an asset value of $7.6 billion…

It is therefore important to implement strategies to protect the organisms in these systems. Challenges to corals come from many areas, but the main driver appears to be climate change. This change can trigger rising sea temperatures, increases in carbon dioxide, crown-of-thorns sea star infestations, and terrestrial runoff, which all harm coral reefs. It’s not at all clear how successful efforts to thwart climate change will be.

Meanwhile, coral reefs are living things, and therefore have genes. To a number of researchers, this means that, in the event climate change doesn’t, or worsens, it may be more advantageous to make sure corals (and maybe other life forms) can adapt to temperature, chemistry and other environmental changes. While nobody is experimenting yet with genetic modifications of corals, other genetic methods are under scrutiny.

Australian and Hawaiian researchers called for a mixture of non-genetic engineering methods (like mutagenesis and breeding for phenotypic traits that enhance or protect growth despite changes in pH or carbon dioxide), with genetic modifications. Many of these modifications will sound familiar to plant breeders or agricultural geneticists. 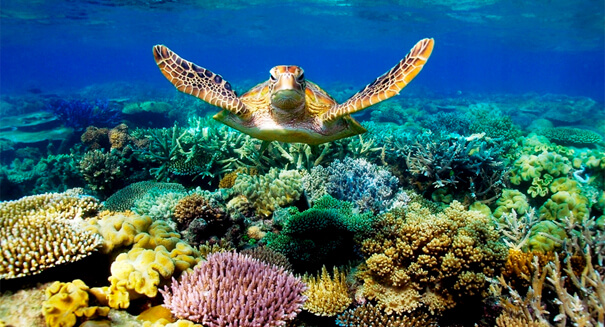 There is some resistance to this idea. Some scientists have expressed concern that GM organisms introduced into the environment could act like invasive exotic species, wreaking harm instead of doing good. However, back in 2004, two biologists at Purdue University demonstrated that the possible harm of introduction could be accurately determined:

Predicting the potential of a GE organism to spread is possible because the ultimate fate of a transgene will be determined by natural selection. Thus, environmental risk assessment can be accomplished by measuring six net fitness components that are common to all organisms, transgenic or wild type: juvenile and adult viability, fecundity, fertility, age at sexual maturity, and mating success. These components can be measured in secure settings.

But the question of saving coral reefs goes beyond tourism, and environmental concerns. Worldwide, about 500 million people depend on the reefs in some way for their livelihood. Another 30 million are entirely dependent on the coral reefs. So, finding ways to preserve the reefs could be a life saver.