Jonathan Lundgren says USDA is censoring him for criticizing neonicotinoids: What’s the truth?

Jonathan Lundgren, a US Department of Agriculture entomologist currently on leave facing misconduct charges, says the government is suppressing information about the dangers of pesticides, which he believes are endangering the health of bees around the world. He’s a whistleblower, say advocacy journalists and pesticide and GMO activists. This narrative, most recently highlighted in a Washington Post magazine feature by Steve Volk, portrays him as a ‘revolutionary’ determined to roll back the excesses of modern farming.

U.S. agriculture, says Lundgren, is in crisis. A lack of diversity in farming and a related overreliance on pesticides have triggered a host of negative effects, including the decline of pollinators, such as butterflies and bees.

“We’re using all of these pesticides because we’ve created a pest problem,” Lundgren says, “and bee health is a symptom of this underlying cause.”

Believing that the USDA was underplaying the dangers of pesticides to bees, last October, Lundgren stopped going to work and filed a whistleblower suit alleging that his research was being systemically suppressed and he had been unfairly disciplined by the government in an attempt to intimidate him into silence. He claimed he was ordered to water-down or retract findings he said pointed to neonicotinoid pesticides as a major cause of health problems in bees. He also filed a separate complaint with the agency’s Scientific Integrity Review Panel.

Late last month, the three-member panel which reviewed the evidence, rejected Lundgren’s contentions. It concluded that he “did not provide credible and verifiable evidence to support his contention that his research was impeded and that he was restrained from communicating with the media and interacting with the broader scientific community.” The panel said Lundgren, who remains on the USDA payroll until his allegations are resolved, was suspended, twice, for cause — a travel-related infraction and for conduct unbecoming a federal employee.

A few days after the panel’s ruling, Lundgren withdrew his whistleblower case with the intention of expanding his allegations and refiling, according to his lawyer. Days later Volk’s sympathetic feature story came out, prompting this sharp response from the USDA:

The Post, instead of educating about various issues contributing to pollinator losses, focused on someone whose conduct has been questioned by his colleagues and who has made unsubstantiated claims. As an employer, the USDA can comment only to confirm the misconduct Jonathan Lundgren chose to publicize. We cannot discuss details of people in the workplace who felt uncomfortable or threatened by his actions. But we must address the actions.

The simplest statement of the U.S. government’s ethics rules is: “Federal employees shall not use public office for private gain.” Which is to say, a public servant must serve the public, not himself or outside interest groups. It’s this regulation that has gotten Lundgren into hot water.

Lundgren has a long history of ties with anti-chemical and organic groups. Next month, for example, in what appears to be a direct violation of USDA policy, he heads to Portland, Maine to speak at the Beyond Pesticides annual meeting in a forum bankrolled by Organic Valley, Dr. Bronner’s and a “premium” organic winery. The focus of the gathering is to strategize and plan an upcoming campaign against conventional agriculture. Beyond Pesticides, an anti-GMO and anti-chemical activist organization, is a member of the National Organic Coalition, a group that lobbies against GMOs and conventional agriculture, and for increased government funding for organics.

Lundgren has full rights as a private citizen to speak at advocacy events. But in this case, he is appearing under his official title as senior research entomologist and lab supervisor for the USDA’s Agricultural Research Service (ARS) — and government ethics rules explicitly ban using an official position for “the endorsement or any product, service, or enterprise.”

When he bashes conventional agriculture and its primary tools at the Beyond Pesticides forum, Lundgren will effectively be saying “Buy Organic.” 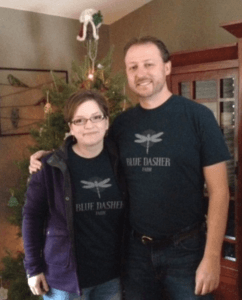 Lundgren is also positioned to gain financially from this appearance—another violation of the government’s ethical policy. He and his wife Jenna are the owners of Blue Dash Farm, which is a for-profit organic enterprise that recently raised $83,000 on the crowdfunding site Indiegogo. His pitch: In a video entitled “Support a metamorphosis in food production using nature’s principles,” a polemic against the use of pesticides and synthetic fertilizers, Lundgren rebrands himself as an agroecologist. Donors to the ‘research farm” who give Lundgren $100 earn the title of “Blue Dasher Tree Hugger” and are sent a t-shirt. Blue Dasher opened its doors May 7, 2015.

Lundgren is still a paid employee of the agriculture department. The USDA has begun a new investigation into Lundgren’s project as it appears to be a direct violation of its ethics policy.

This is just the most recent ethical lapse by Lundgren, say USDA officials. He’s viewed internally as a loose cannon, selectively presenting one side of complex science issues. In 2014, he was investigated for violating the policy against connecting a personal computer to the government network. “…[Y]ou admitted to engaging in the behavior complained about,” the government concluded in its investigation, “and the imposition of a three (3) day suspension against you for it appears not only warranted, but lenient.”

Last August, the agency suspended Lundgren for two weeks without pay, which cost him about $4,500 in salary. That’s what promoted Lundgren’s complaint and subsequent whistleblower suit.

John McMurtry, USDA’s associate area director for the Plains Area, responded personally to Lundgren’s complaint, laying out how supervisors had grown weary of his antics and his refusal to focus on research, which is his job. The complaints against Lundgren were widespread and ongoing, said the agency in its suspension decision.

Lundgren frequently appears in local media bashing pesticides and other aspects of conventional agriculture, often in violation of government ethics rules. For example, he gave an interview to the Boulder Weekly promoting the anti-GMO, anti-pesticide Center for Food Safety without notifying his supervisors or securing approval.

“As you know, this is standard protocol for dealing with the media on sensitive issues,” McMurtry wrote. Lundgren claimed “retaliation” when he was reprimanded for it.

McMurty specifically addressed Lundgren’s claim that his research was suppressed. “I find the evidence does not support your assertions,” McMurtry wrote. “…[T]he articles you cite as the basis for your claims as published in the Journal of Pest Science in 2012 and Bioscience in 2013 were published with ARS approval.” In other words, it’s pretty difficult to claim you’re being repressed by an agency that for years has been approving your papers, uncensored, for publication.

Predictably, activist journalists such as Mother Jones‘ Tom Philpott began fashioning a martyr and conspiracy narrative that has since gained traction with some others in the media–most notably and recently in the Washington Post piece. Hamstrung by ethical guidelines, the USDA cannot tell its side of the story except through official documents—and rulings such as the recent rejection of Lundgren’s complaint.

USDA time and again had approved Lundgren’s research papers and attendance at conferences. If the agency wanted him silent, it sure wasn’t trying very hard. It was only after Lundgren “once more engaged in serious misconduct” that USDA opened the disciplinary action that resulted in his pay being docked. As the USDA noted in its investigation of his complaint, “Your providing false information about this matter raises concerns about your judgment and whether you can be relied upon to carry out your duties… Your continuing to engage in misconduct despite the imposition of previous disciplinary action suggests a low potential for rehabilitation.”

It’s up to the whistleblower panel to decide if Lundgren’s rights have been suppressed because of his ideological views. What’s clear is that he operates by his own rules. He fashions himself judge and jury of the American farm system, and justifies his misconduct because of his strong belief that farm chemicals present an imminent health and environmental danger.

Jon Entine, executive director of the Genetic Literacy Project, senior fellow at the Institute for Food and Agricultural Literacy, University of California-Davis. Follow @JonEntine on Twitter