Boulder County, Colorado has been acquiring open space over the past several decades.  Twenty-five thousand of those acres have been acquired with the intent to keep those lands in agriculture and away from urban development. What can happen on those lands is dictated by the county’s Open Space Cropland Policy. Until now that policy allowed for coexistence of a variety of farming methods and allowed growers to make choices best suited to their operations.

That changed last week. On March 17, the commissioners voted 2-1 to ban the growing of genetically engineered (GE) crops on Boulder County Open Space. On the board, commissioner Cindy Domenico opposed the ban while commissioners Deb Gardner and Elise Jones voted for it. The vote came after intense public debate, and widespread opposition to the ban from regional experts and scientists who noted the vast sustainability benefits of GE crops.

The county’s Parks and Open Space Advisory Committee, a team of experts whose role is to advise commissioners on use, acquisition and maintenance of open space ground, voted 5-3 to keep GE crops on open space.The Parks and Open Space staff, along with the agricultural staff at Colorado State University (CSU) extension also generated data to show the economic and environmental benefits of farming in Boulder County using GE crops. Furthermore, a comprehensive survey showed a majority of Boulder County residents support current Cropland Policy, which includes allowance of GE corn and sugar beets, and the conclusions of Natural Capitalism Solutions, a third party firm hired by Boulder County to conduct a literature review on sustainable agriculture, stated GE crops,“have environmental benefits due to generally decreased pesticide usage and stimulation of soil conservation practices.”

The public testimony of Gardner and Jones showed their decision to cast aside the expert opinions and recommendations was based on their own feelings there is tie between GE crops and “toxic pesticides” and that organic agriculture is better for the environment. 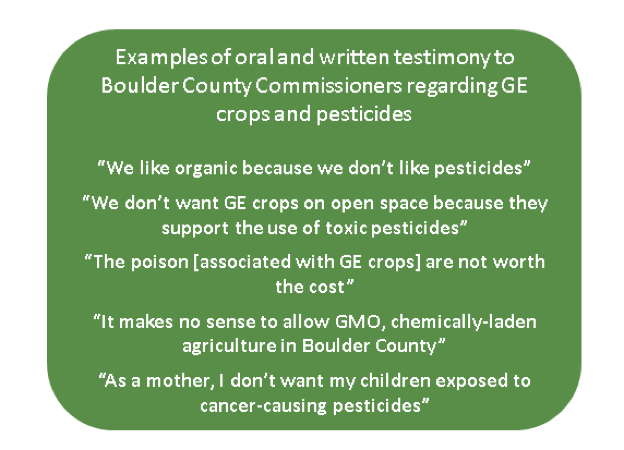 Those “feelings” contradict the empirical evidence on the ground. GE crops have greatly reduced the environmental impact of the agrichemicals used by farmers. The report Parks and Open Space staff and CSU scientists generated quantified the reduction through a relative environmental impact quotient (EIQ) looking at toxicity, longevity and application requirements of chemistries used with GE and conventional crops. For GE sugar beets, one of the two GE crops allowed on open space, the EIQ is 90 percent lower than conventional practices. For corn, the other allowable crop, the EIQ was 81% lower using GE technology. 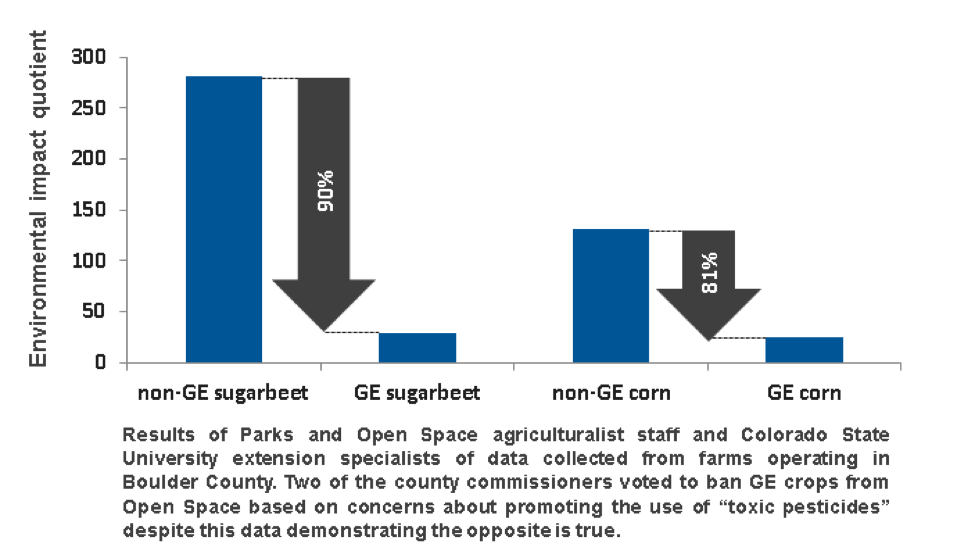 Boulder County has a strong push for organic production with Cropland Policy mandating 20 percent of open space acreage be organic by the year 2020. The vocal opponents of GE technology seem to be unaware that other agricultural practices, including organic, can and do use pesticides as witnessed in the written and oral testimony. Even a wholesale move to organic would not ensure a reduction in pesticide application as evidenced by a California Department of Agriculture report showing increased organic production has led to more pesticide application — mostly from a sharp increase in sulfur fungicide, which is “natural” but less targeted and not as safe as synthetic alternatives.

Farms always face disease and pest pressures and when barred from using synthetic pesticides which are effective at very low doses; instead because of organic regulations, they are forced to use natural compounds which need to be applied at higher rates more frequently.

The bottom line is the decision of two Boulder County Commissioners to vote for a ban on GE crops in Boulder County is far more likely to lead to an increase in pesticide usage, rather than a decrease. And those pesticides are likely to be more toxic and less targeted to key pests.

The two commissioners are equally off base about their belief that organic production is better for the environment than conventional farmers who use GE crops. The data generated from the Parks and Open Space staff and CSU showed organic production currently has the largest carbon footprint of any agricultural practice in the county. Farmers raising GE crops have adopted conservation tillage practices. This was possible because of a combination of their investment in overhead irrigation and no longer needing cultivation for weed control since they achieve adequate weed management with herbicide tolerant GE crops. Data from the Boulder County farms show GE production with conservation tillage reduces soil carbon emissions by 83 percent over conventional farming and 85 percent over organic.

Not a single organic producer in the county has even farmed using conservation tillage practices. However, Commissioner Jones insists no-till organic is feasible based on a one-off opinion piece from the Rodale Institute, a pro-organic, anti-GMO activist foundation; it’s not been shown in real practice, however. In practice, the organic farmers in Boulder County are reliant on furrow irrigation which negates no-till. They also do not have GPS guidance on any of their equipment so a strip till application would be impossible. The ban on GE crops will disallow those using conservation tillage today to continue in the future. Less effective conventional herbicides require additional mechanical removal of weeds. Every time the soil is disturbed, water is lost to the environment. That is partly why Parks and Open Space staff further showed organic production uses nearly 10-fold the amount of water as GE crops with conservation tillage, a serious impediment to raising crops in a county which receives only 14 inches of rainfall on average annually.

The decision to ban GE crops from open space has been hailed as a victory for progressives, but  it’s really regressive, forcing farmers to go back to antiquated chemistries and techniques. Despite all the data supporting GE crops as a key part of improved sustainability and environmental safety, the county commissioners fell prey to misinformation, propaganda, and political pressure. Activists made a lot of noise and promised big things from organic in the distant future  that GE crops allow for today (e.g. no till). Unfortunately, no one will be held accountable if these remain promises and never reality. Fortunately for Commissioners Jones and Gardner, the ramifications of their decision will likely not manifest themselves until long after they are term limited. They will leave behind a trail of small, family farmers who will suffer financially and operationally. That is not promoting sound agricultural practices.