Labeling of genetically modified organisms in food has been debated for decades. Whether the labels should be mandatory, voluntary, or third-party based like Kosher has been widely disputed.

For a long time we’ve all discussed what would happen if/when GMO labels hit the stores. Some groups claimed that there was no cost at all to just label food. Other groups predicted serious impacts on the budgets of consumers. In Vermont, GMO labeling legislation took effect on July 1, and we are already beginning to see the reactions by food producers and distributors. We don’t have any data yet on how consumers respond but we can examine what the companies are doing at this point.

Every tidbit so far has been an example of “told you so.” Some companies are embracing their GMO supply chain and doing the charm offensive. Some are swapping out ingredients. Some are raising prices. Some are eating their price differences (which, of course, will hurt small business the most). Some may simply opt-out of selling in the Vermont market.

Things may shift was we get closer to the deadline, or change completely if the court battles resolve. But here’s what we know about the current state of play. Here are six real consequences of GMO labeling: 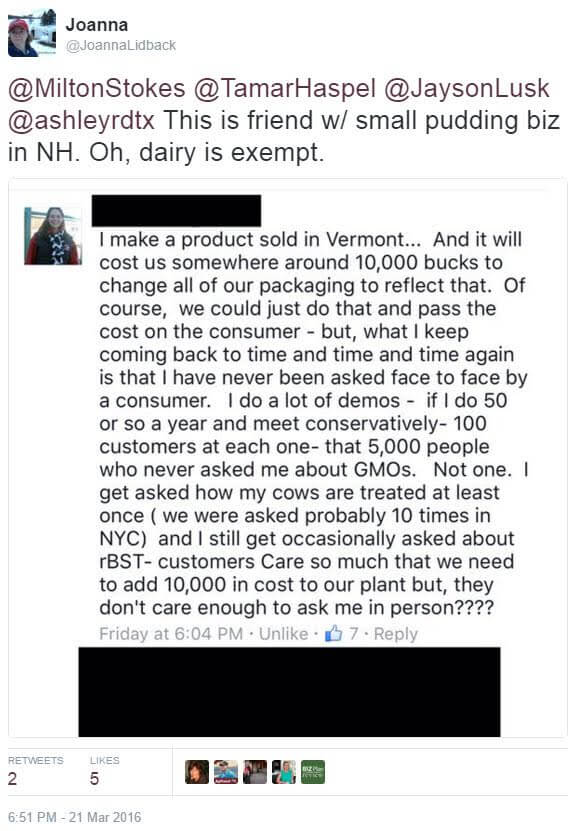 Campbell’s was the first company to go public with their plans, in this piece from the NYT. They will now label all their products across the U.S., because labeling for one state was not workable for them—and would be “incredibly costly”. The Chief Executive of Campbell said about their own program, “Ms. Morrison said that complying with Vermont’s law was expensive….” No, it’s not just some text on the can. It’s reviewing the supply chain, checking all the recipes, evaluating the logistics, exploring sourcing options, etc. Anyone who tells you it’s just a bit of text has no grasp of this, nor of the $1,000/day penalty for getting it wrong. Small producers are acutely aware of how much the changes will cost them (in the example here that’s $10,000). Their budgets are far less flexible than those of Big Food, and it will be hard to know if some of them just choose to stop selling into that market.

In the same NYT piece, we find that plain SpaghettiOs must carry a GMO label. But meatball SpaghettiOs do not need to. Since they are regulated by different agencies, meat-containing products are exempt. How this adequately informs consumers has yet to be adequately explained to me. I’m sure someone will try in the comments. We also know that the state of Vermont can’t handle the incoming questions at this time, and according to a Wall Street Journal piece: “The office of Vermont Attorney General William Sorrell, which is responsible for enforcing the state law, has been deluged with questions. Its website now warns that the office won’t reply to email inquiries about GMO labeling and asks companies to stop calling.” That’s informative.

3. Companies will swap out ingredients.

The same WSJ piece above included reports of a small pasta business that had to make changes to their recipes to avoid the labeling hassles and possible penalties. They had been using canola oil–which may be herbicide tolerant GMO, or herbicide tolerant non-GMO. Surely even if they were using the non-GMO version but people saw it on a label, the tractor-chasing legal teams would light up with glee. In any case, they have now switched to olive oil. This raised their costs by 10 percent, without a similar increase in sales. Other small companies are retiring some products (how’s that for choice?). Maybe Big Food can eat those kinds of costs, but this hurts a small business. 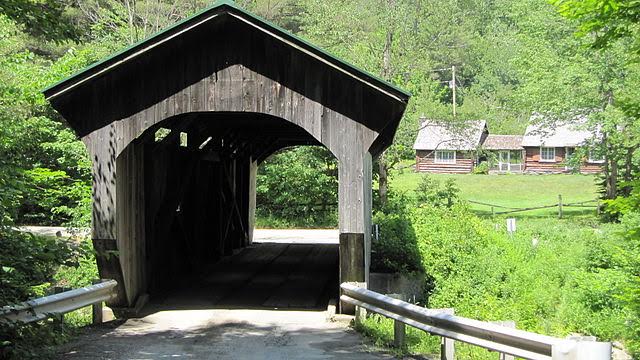 And that said, if you actually think Big Food doesn’t pass the costs along in some way, I’d like to sell you this charming Vermont GMO-free covered bridge….

We know this from Ben & Jerry, in fact. Interestingly, in early comments on this, B&J said: “Ben & Jerry’s has no plans to raise prices as a result of the transition….” Later we learn, also from the WSJ article: “It took about three years just to remove GMOs from ingredients like cookie dough and caramel, and the new products averaged 11% higher in price.” About that bridge, my prices just went up.

Besides some products simply disappearing due to the hassle of finding new sources, other products may get modifications to avoid GMOs with surprising results. We’ve watched multiple examples of products losing vitamins as they got their Non-GMO Project status. In the case of not-Heath-Bar-Crunch, customers were dismayed by the new flavor. I have to say, though, the most surpising thing to me was adding new allergen labels as a result of their switch. One company switching away from cottonseed oil has opted for peanut oil: “that switch introduced a new allergen the company had to warn consumers about.” Swell. If you have an allergy as I do, you’ll have to be aware of ingredient changes to products you’ve bought all along. Let’s hope that parents of kids with allergies don’t miss these changes because their kids could get hurt.

6. Some companies will opt out of shipping to Vermont.

An article by the Associated Press covered another aspect of the challenges: shipping. One company was facing serious logistical issues, which are also costly.

Herr Foods Inc., a midsize snack food company based in Philadelphia, is considering pulling its products from Vermont if the law takes effect, said Daryl Thomas, senior vice president for sales and marketing. “Just the logistics, the expense are horrendous,” he said.

And this doesn’t include the costs of getting it wrong, with the very steep penalty and ensuing the legal nightmares. Yeah, labelers want choices. The choice to remove other people’s favorites. In addition, small shop owners are losing sleep over the downstream consequences of opting-out:

“As a retailer, there’s all sorts of ways that this could backfire on us as a state, and a small independent guy like myself if I’ve got nothing on my shelves or I’ve got limited (supply) and my competitors have no problem with the staying power, we’re done,” said Ray Bouffard, owner of Georgia Market in Georgia, Vermont.

Again, we see that small business stands to be harmed by the whole scenario. And Big Food and Big Chain probably continue to swim in the shark-infested waters. Is that what labelers wanted? Really? A win for the Bigs? Well done.

These are the known issues. Other unknowns at this point include the impacts on sales, legal penalties, enforcement costs, and other financial effects. Another possibility is harassment of companies. “Some of the feedback that these companies are getting is boycotts from groups against the use of GMOs…”. We’ll have to assess this on the real roll-out, but I’ve known this was the goal all along. If you think that labels are going to stop the shouting, see me about that bridge again. 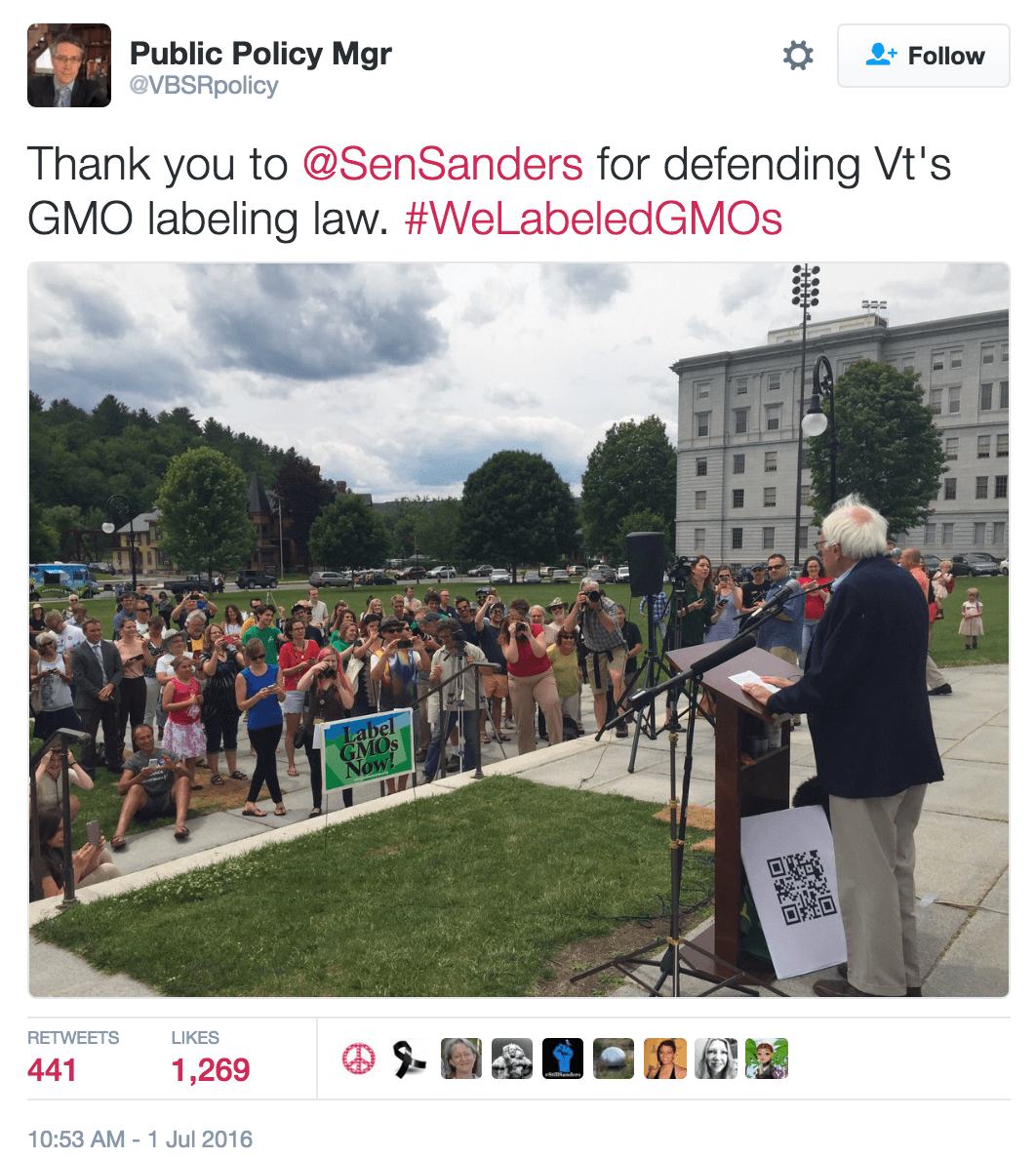 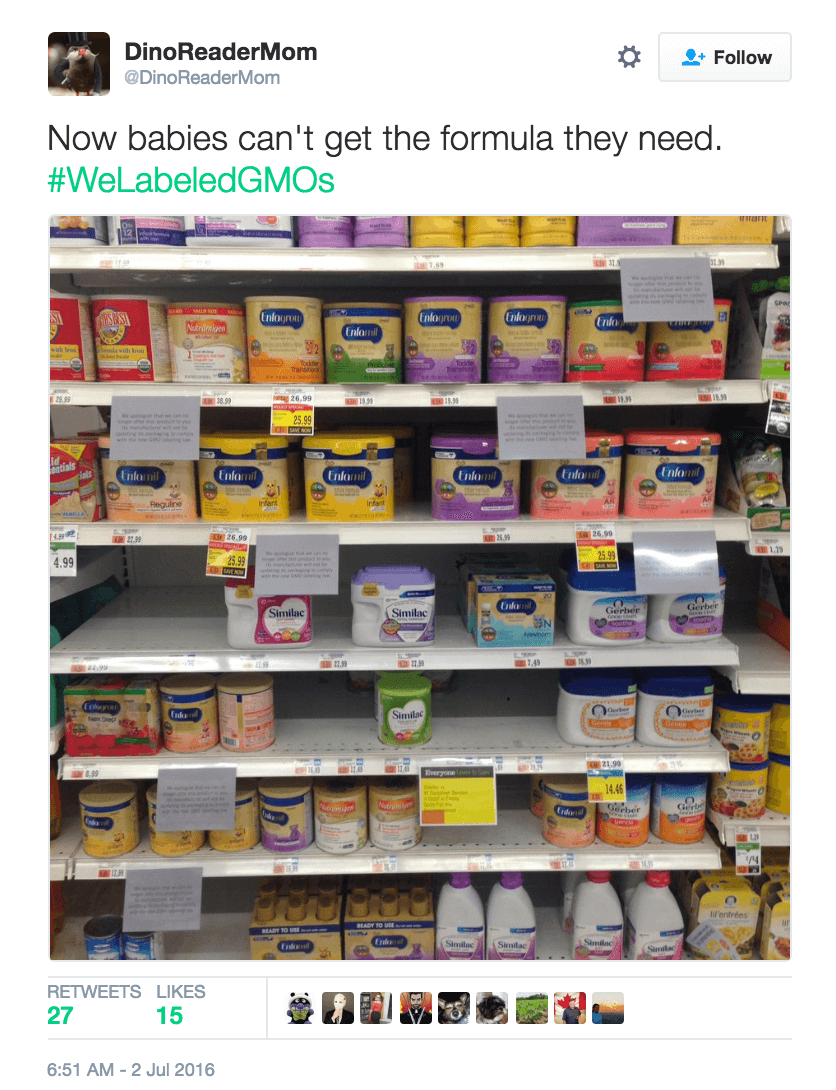 This article originally appeared on Biology Fortified as Six real consequences of GMO labeling – you may be shocked by #5! and was reposted with permission of the author.

Mary Mangan, Ph.D., received her education in microbiology, immunology, plant cell biology, and mammalian cell, developmental, and molecular biology. She co-founded OpenHelix, a company providing training on open source software associated with the burgeoning genomics arena, over a decade ago. All comments here are her own, and do not represent her company or any other company. You can contact Mary via twitter: @mem_somerville