A large proportion of autism research begins with and is centered upon external presentations of the disorder, primarily behavioral manifestations such as social communication difficulties and repetitive behaviors. Such measures are crude, however, and symptoms often present in different combinations. To better define the disorder, psychologist Raphael Bernier, geneticist Evan Eichler and others are instead looking for molecular, cellular, and anatomical indicators of autism, including single genetic mutations as well as the behavior of 10-week-old neurons cultured from patients’ skin cells and the folding of brain tissue in two-year-old children. 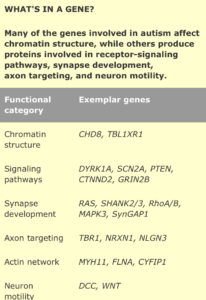 This inside-out approach has confirmed a long-held suspicion that autism is not a single biological disorder. The causes and types of autism are as multitudinous as the symptoms, and any successful treatments will likely be as varied. “It’s cancer all over again,” says Eichler. “The victories we’ve had over cancer weren’t for the disease in its entirety, but gradually picking apart subtypes of the disease and developing therapies for those.”

Bernier and Eichler are currently three years into a grant from the National Institutes of Health to track down and fly in individuals from around the world to compare phenotypes to genetic profiles and continue to identify such subtypes. In 2011, the two estimated that more than 800 genes are involved in autism. Today, there are about 100 that have been confidently linked to the disorder, says Eichler, and another several hundred have been flagged as candidates.

The GLP aggregated and excerpted this blog/article to reflect the diversity of news, opinion and analysis. Read full, original post: The Genes Underlying Autism Are Coming Into Focus