Is it really possible that New York State will ban school kids from eating sweet corn grown almost completely without insecticides and free from brain-damaging mycotoxins?

From time to time, elected boards of education and similar organizations have proposed some science-defying stances; resolutions against teaching evolution and accepting climate change stand out historically. Now, the New York State Parent Teacher Association (NY PTA) has earned an “F” in science 101 with proposals that would ban foods made using genetically engineering or that contain GE ingredients. To make things worse, the PTA is also urging a ban on dairy products produced with recombinant bovine somatotropin (rBST, also known as rBGH, or recombinant bovine growth hormone).

Packed in with recommendations to add a guard to protect kids when they get off the school bus and to offer sign language as an option in school is this draw-dropping resolution:

New York State PTA supports legislation and regulations that ban GMOs and GE foods from use in food and beverages provided by school meal programs and vending services, and be it further that until such ban is in effect, all school districts be encouraged to prohibit the use of foods and beverages that contain GMOs and GE foods provided by the school meal programs and vending services.

Until GMO and GE food safety is conclusively supported by good science, NYS PTA proposes acting with caution and keeping these products out of school provided food and drinks.

The PTA has now joined the ranks of Dr. Oz, natural product hucksters Mike Adams of NaturalNews.com and Joseph Marcola, and the infamous Food Babe in mocking critical thinking on food and farming. GMO food safety is not a raging debate, at least among scientists. The National Academy of Sciences—the world’s leading independent science group representing the country’s leading research scientists, put a nail in that coffin with the release last spring of the most comprehensive analysis of GMO crops ever. The 388-page report, two years in the making, concluded:

no differences have been found that implicate a higher risk to human health and safety from these GE foods than from their non-GE counterparts. 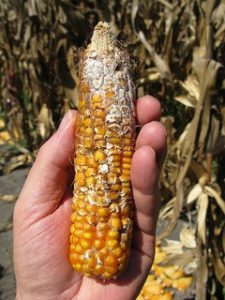 And rather than potentially harm students, the independent science panel concluded that food grown with GE could have “favorable effects on the health of millions of people”—the exact opposite of the science-mocking conclusions of the PTA. Many GMO crops, such as sweet corn grown using insect-resistant GE seeds have clear benefits, such as reducing the spraying of some toxic chemicals and a reduction in mycotoxins on corn eaten by consumers.

The NAS findings chose more than 2000 studies and reports, and the scientist groups aligns itself with more than 275+ other
independent science groups around the world
that have
concluded that GE crops are as safe or safer than other conventionally grown ones. Here is the Genetic Literacy Project’s analysis of the question, “Are GMOs safe?” And the NAS reflects the consensus findings of scientists in the United States. In January 2015, a survey of scientists in the American Association for the Advancement of Science found that 88 percent endorsed the safety of GM foods—a stronger consensus than believed that climate change is mostly human induced. The PTA appears to be feeding unfounded public fears rather than seeking to educate and promote critical thinking–and food safety. 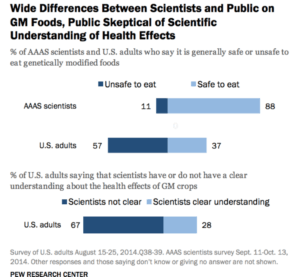 The consensus research also refutes other claims in the NY PTA resolution, including:

The PTA also called for warning labels on any milk or other dairy product produced using recombinant bovine growth hormone, or rBST. This hormone exists naturally in cows, and injecting the cows with rBST, which is genetically engineered to be chemically identical to “wild type” BST, significantly increases production of milk. This makes dairy farming more productive and reduces the environmental impacts of cows (fewer cows makes the same amount of milk).

Anti-GMO activists (and now the NY PTA) have claimed that cows injected with rBST have a greater risk of mastitis, an infection of the udders with a number of different causes that is treated with antibiotics. They say these antibiotics can be passed on to humans through milk. One of the world’s most aggressive GMO critics, the Organic Consumers Association, (read GLP profile here), has issued a “white paper” on its alleged harms and has been campaigning for school boards to ban milk from treated cows claiming there is “indisputable” evidence that it causes cancer in children.

Except that’s not what the science says. Consensus studies on rBST, such as this one from the 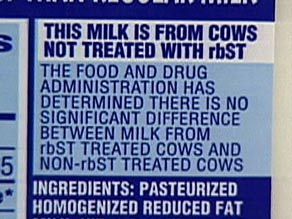 University of Georgia, says there is no clear evidence that there is any significant difference in mastitis cases between cows on rBST and cows without. The FDA, World Health Organization and the National Institutes of Health have reviewed hundreds of studies and have independently concluded that dairy products and meat from BST-treated cows are safe for human consumption. Milk from untreated cows has now has become popular in anti-GMO circles, and now, apparently among some PTA parents.

Regulators look specifically for antibiotic residues in cow milk, which is illegal. Every tank of raw milk is checked for antibiotics residue before the milk gets processed. If a tanker is found positive then the milk is rejected for human consumption. Here’s what the Food and Drug Administration states about the process of testing for antibiotics and other drug residues:

The PMO requires a milk sample to be collected every time raw milk is picked up at the farm (also known as a “universal sample”). A milk sample is also taken when a truckload or bulk tank of milk arrives at a Grade “A” dairy plant for processing. Each arriving truckload of milk at the plant must be tested for the presence of at least four of six specific Beta-lactam drugs (penicillin, ampicillin, amoxicillin, cloxacillin, cephapirin, and ceftiofur).

If this bulk milk sample shows concerning results, each farm that supplied milk for that truckload will undergo mandatory testing. Universal samples collected at the farm level are typically only tested if the bulk tank of milk that arrives at the processing plant tests positive for drug residues.

These resolutions are significant because they determine the issues that the PTA and other educational organizations will base lobbying efforts upon, act as a guide for local PTAs on issues, and could ultimately affect state law—and New York’s not a small state. Further, if the anti-GMO resolution is adopted, it will be forwarded to the National PTA for consideration and inclusion in National PTA policy for lobbying of the US Congress and with other state PTAs. The PTA’s state membership must vote on the resolutions at their annual convention in Niagara Falls in November.

In a column on Huffington Post, University of Florida plant scientist Kevin Folta pointed out the sad contradiction that an educational organization dedicated to training more students in STEM fields is now promoting scientifically invalid viewpoints:

The 2016 NYS PTA resolutions have clearly been hijacked by stemless activism, minor opinions wishing to impose their beliefs on the food choices and perhaps the scientific education of New York Public School children. How can we expect our children to be excited about science, technology, engineering, and math, if the rules they live under shun STEM, and are built on an agenda of politics, ignorance, fear mongering and myth?

Jon Entine is executive director and founder of the Genetic Literacy Project. Follow him on Twitter @jonentine.