How to save Monarch butterflies? Banning glyphosate and planting milkweeds won’t help

Who or what is to blame for the Monarch butterfly’s declining populations? Among activists, the blame rest largely on the shoulders agrochemical giant Monsanto and its products—particularly the herbicide glyphosate and GMO crops that are used in combination with it. Activists say a ban on glyphosate along with a concerted effort to plant milkweed will save the butterflies.

This position comes from many anti-GMO and environmental organizations, including the Institute of Science in Society (ISIS), which had an article published in The Ecologist with this lead paragraph:

Monarch butterfly numbers are dwindling despite protection of their wintering forests in Mexico, and voluntary schemes to restore their food plant, milkweed, in US field margins, writes Eva Sirinathsinghji. These measures alone are insufficient: no less than an end to the mass spraying of glyphosate on crops, predicated by ‘Roundup-ready’ GM corn and soy, will do.

The Center for Food Safety (Read GLP profile here) released these maps that correlate glyphosate use in the US and Canadian Midwest with Monarch migrations between these regions and Mexico. To anti-GMO activists, these data clearly indicate that glyphosate is wiping out milkweeds (the main food source of Monarch caterpillars—but not adults), and therefore starving out the migrating Monarchs. However, the story they are painting is not entirely accurate. 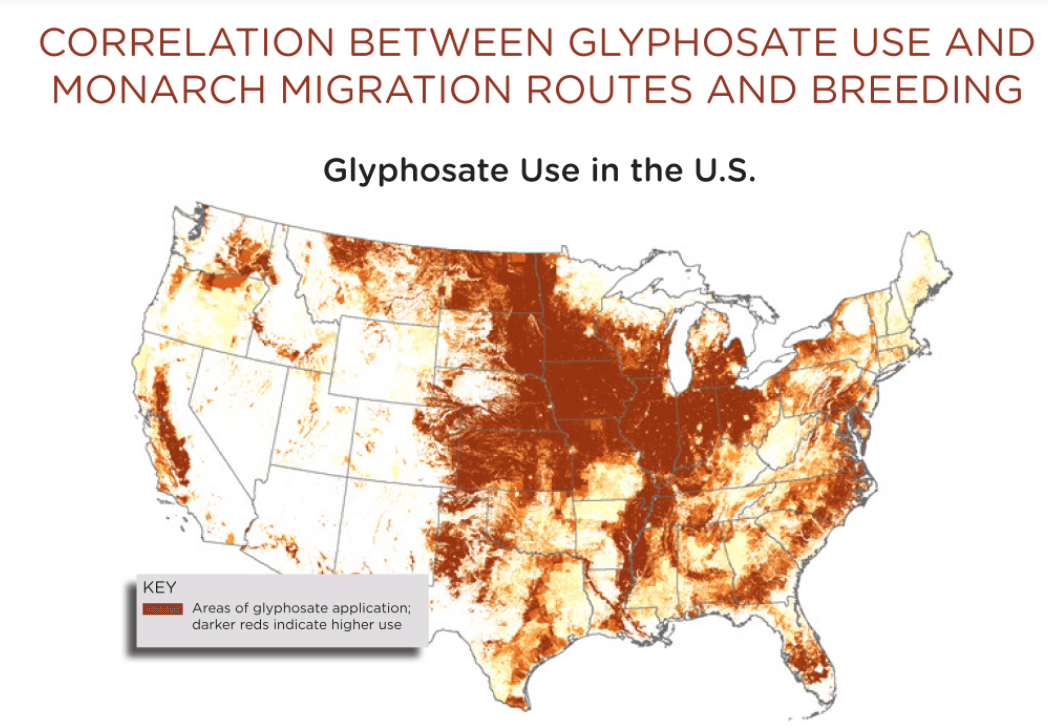 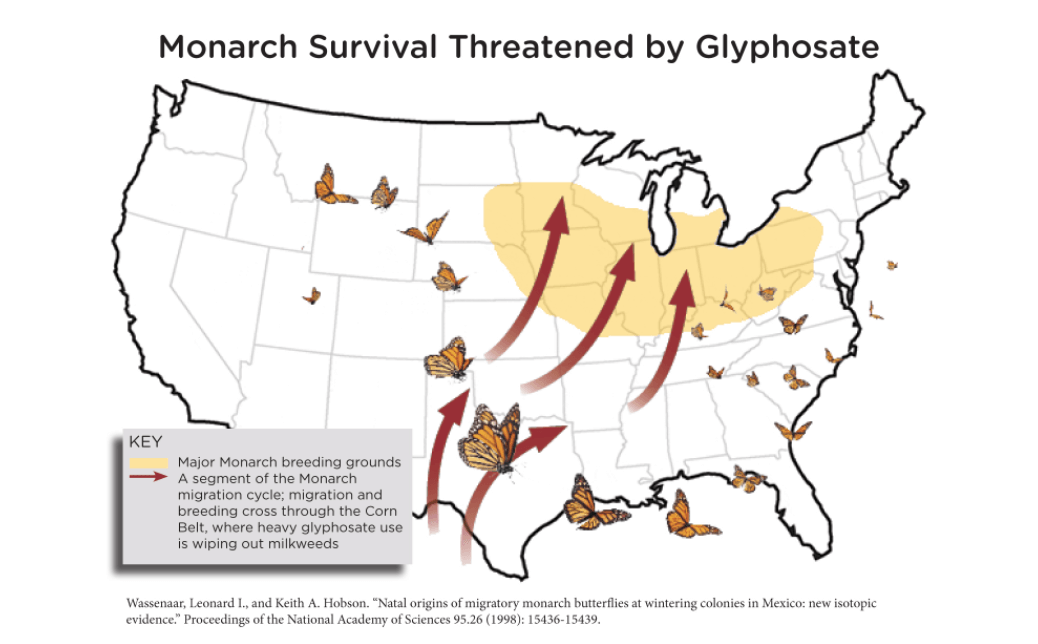 The Monarch butterfly migration is a natural wonder. After a winter hibernating in central Mexico, the black-and-orange flocks begin a 6,000-mile round-trip journey that transcends generations. After mating in Mexico in early spring, the butterflies fly to the southern US and lay eggs on milkweed plants there. The parents die, and caterpillars feed on the milkweeds, before continuing the northern migration. This new generation flies north into Canada, mostly staying east of the Rocky Mountains. Another generation is bred in this northern region. Starting just before US Labor Day, unmated butterflies make the marathon trip back to Mexico, where the over-winter hibernation begins anew. 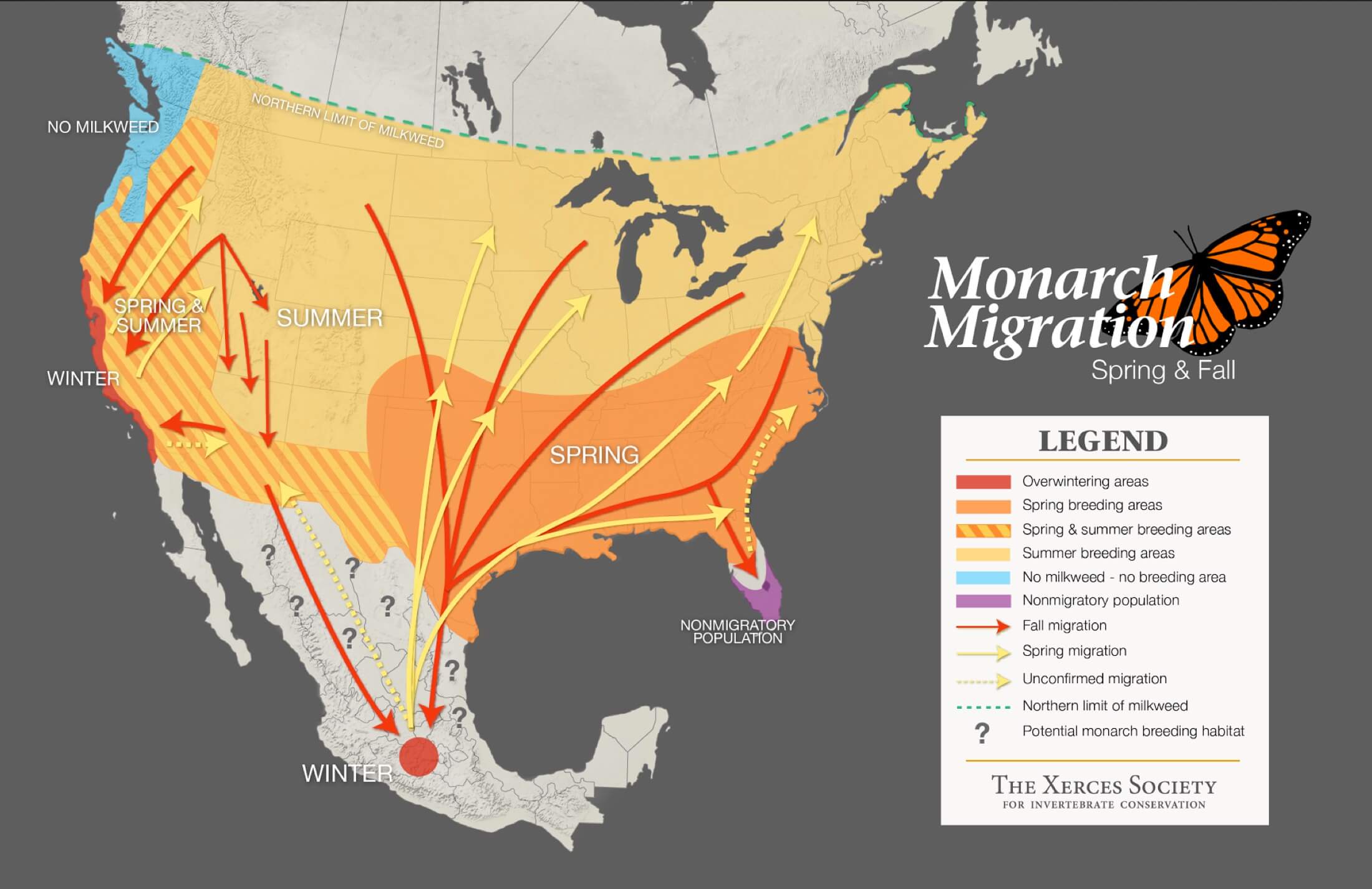 A Cornell University analysis of 6,000 records of butterfly migrations, compiled by a citizen-scientists (a.k.a., butterfly-watchers) compiled from data between 1993 and 2014 showed that butterfly population declines occurred most severely in their winter grounds in Mexico. Moreover, these populations rebounded during the spring migration over the US Midwest and into Canada, and populations did not decline when the butterflies were in areas in which glyphosate was used.

By using a number of statistical tests on the citizen-science data, Hidetoshi Inamine, Stephen Ellner and Anugar Agrawal of Cornell and James Springer of the North American Butterfly Association found that the connection made by these anti-GM groups, and some research studies, between glyphosate, milkweed depletion and butterfly deaths didn’t exist. 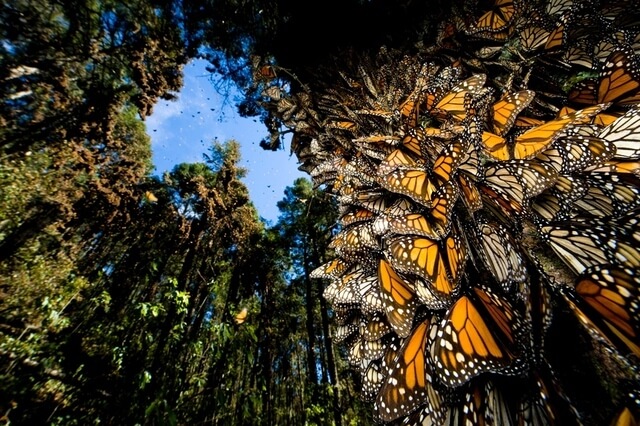 Instead, the researchers confirmed earlier works showing a depletion of butterflies in Mexico and showed a rebound in populations as they moved northward. A 2005 decline in the Midwest, used by groups to show the milkweed/glyphosate connection, was not as significant using these new data and had more to do with population declines of the butterflies in Mexico than with anything happening in the US (this decline has since disappeared). And in Mexico, issues like logging and farming have significantly reduced the acreage used by Monarchs to hibernate.

So, the decline in butterfly populations happened in two places where glyphosate was not an issue: in overwintering grounds in Mexico (where it’s not used), and as their adult forms flew back to Mexico (when they no longer fed on milkweed, instead preferring nectar). According to the researchers:

No such correlation is observed…The peaks of the summer Midwest and Northeast population indices both occurred in 2006, following a 10-year period in which use of herbicide tolerant crops rose steadily from 0 to 62.5% of corn and soybean acreage.

If milkweed reduction is the main factor in the monarch decline, we expect to see changing relationships in stages where breeding occurs. Instead, we found temporal trends at stages where the population is not building and not dependent on milkweed.

Perhaps ironically, a lot of these data are congruent with the studies that the Center for Food Safety and ISIS have presented. Yes, winter populations in Mexico have dropped. Yes, Monarchs fly over areas where glyphosate (and other herbicides) are used on corn and soybeans. But if Monarch caterpillars aren’t raised in those areas, then stuffing the entire Midwest from Oklahoma to Saskatchewan with milkweed probably won’t help the Monarch. 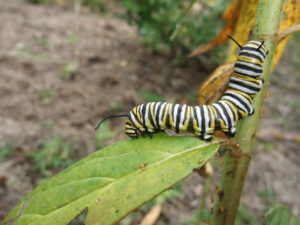 Farmers have been planting milkweed more and more along the Monarch migration routes, but the plant presents some issues. They are tall, have deep roots, and are quite invasive. Pulling them out doesn’t get rid of them—they’re resilient enough to just regrow. Terry Daynard, a grain crop farmer in Guelph, Ontario, and former executive vice-president of the Ontario Corn Producers’ Association, pointed out on his blog (reposted by the Genetic Literacy Project) that Ontario farmers were required under provincial law to kill milkweed. Now, a number of efforts in Canada to maintain a balance of milkweed that doesn’t threaten farm activity.

But for many parts of the US along the Monarch route, the Cornell study points to milkweed planning—and glyphosate banning—as a waste of time and resources that could be better used planting more nectar-rich plants.