Myth busting on pesticides: Despite demonization, organic farmers widely use them

One principal “advantage” of organic food over genetically modified conventionally grown crops, many consumers believe, is that organic food are free of pesticides. It’s not only much of the public believes that. Well-trusted non profits, such as Consumer Reports, promotes that view as well.

For example, in early 2015, it released “From Crop to Table Report,”which notes in one sub-headline, seemingly with horror, that “Pesticides are designed to be toxic to living organisms.” and has another info-box headlined, “Organic: Farming Without Pesticides.” 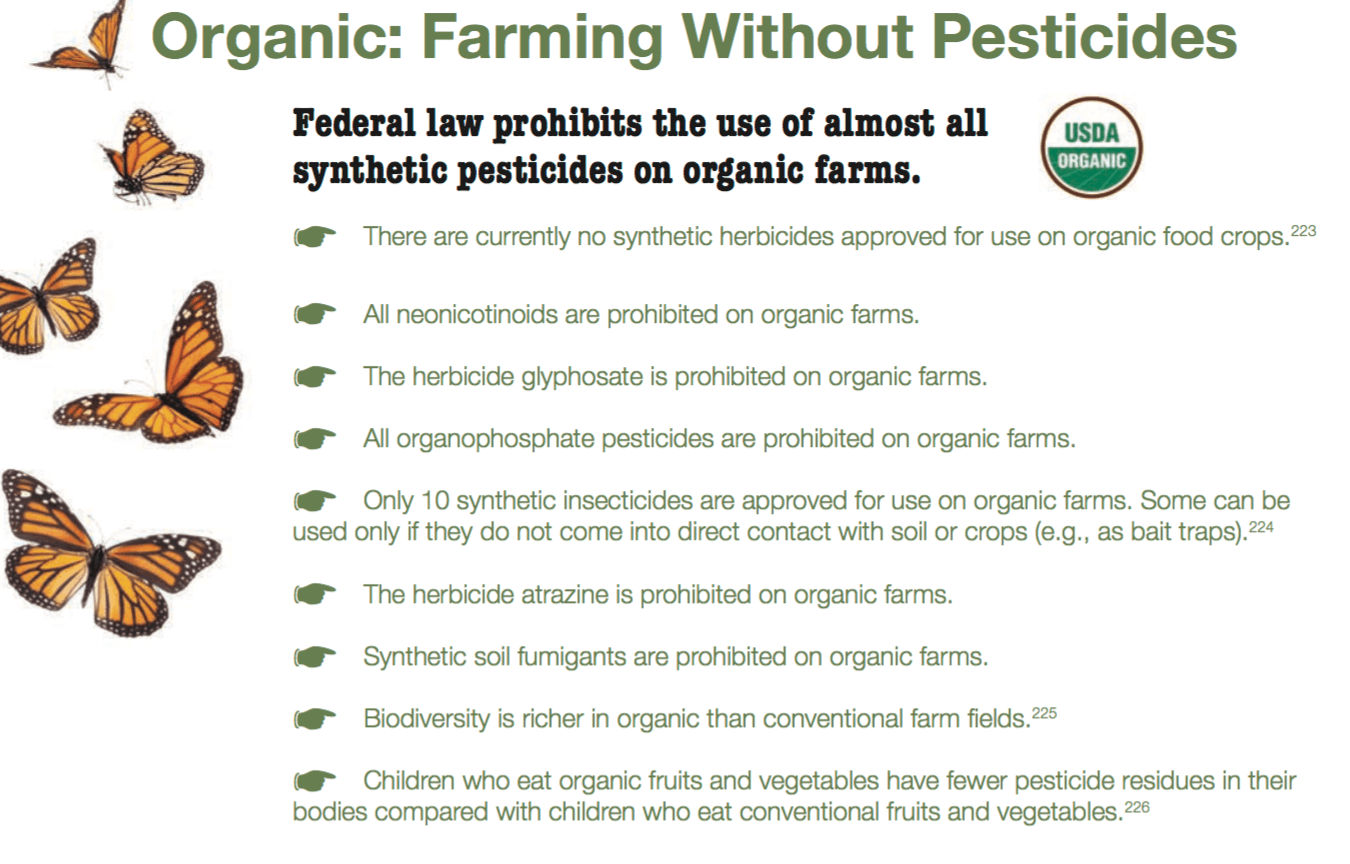 But the headlines–promoting the widespread myth about organic farming–are flat out not accurate. The truth is, all farmers use pesticides. And these chemicals–some of which are among the most dangerous pesticides used by farmers today–are all with the approval of the US Department of Agriculture.

In fact, Consumer Reports backtracks from its misleading “Organic Farming: Without Pesticides” headline in its own info-box, which, like the overall article, is a mishmash of conflicting statements and cherry picked factoids. It notes, “Federal law prohibits the use of almost all synthetic pesticides on organic farms” and then a few paragraphs later, it contradictorily states, “Only 10 synthetic insecticides are approved for use on organic farms.”

CR is typical among organizations that have taken an advocacy, rather than a science-based, stance on the great debate over pesticide use and modern farming. This CR piece–now a standard part of CR’s outreach effort on food–was produced with the “expert” guidance of its chief consultant” Charles Benbrook, an agricultural economist pushed out as an adjunct professor at Washington State University in March 2015. Benbrook’s recent research comparing organic and conventional agriculture, published almost entirely in pay-for-play predatory journals, was financed entirely by advocacy anti-GMO organic organizations. [Read GLP Biotech Gallery profile of Benbrook]

Under Benbrook’s guidance, CR has subtly promoted the myth that organic farming can somehow magically control insects and weeds without using chemicals of one kind or another, and the ones that do use are less toxic than targeted synethic chemicals used by conventional farmers.

Some specific chemicals are not approved for use on organic farms, including organophosphates, glyphosate, atrazine and methyl bromide. But a surprisingly high number of pesticides are allowed. And some organic farmers would like government permission to use even more synthetic pesticides

The USDA National List of allowed pesticides for organic growers is quite long. The list includes some substances that one would assume would be relatively harmless, such as mulch, dairy cultures or vitamin B. But others on the list should raise eyebrows: Copper sulfate, elemental sulfur, borax and borates are all known to cause some harm to humans and are approved members of the organic list. Among “synthetic” pesticides, pyrethrums are still allowed, and Vitamin C that is chemically derived (and therefore synthetic) is allowed, as are various forms of alcohol.

Whether “natural” or “synthetic,” these chemicals have unintended side effects. As to safety differences between the two categories, “You can’t generalize that broadly,” said Rob Wallbridge, an organic farmer in Quebec, Canada. “Every pesticide has a different profile, and there are many different ways to define safety.”

Acute toxicity (measured by half of a lethal dose, or LD50) is very often used, but rates of exposure, persistence in the environment, chronic chemical effects, and impact on off-target animals and plants also are important considerations. One criticism of organic pesticides, in fact, is that a farmer has to use a lot of them to get the same effect as conventional pesticide. If it’s true that “the poison is in the dosage,” then some organic pesticides (like sulfur or copper) do not look very benign.

A September article in the GLP outlined just how extensively organic farmers use pesticides. Plant scientist Steve Savage broke out the latest California pesticide use data, dating to 2013, based on pounds. The categories that have organic-approved active ingredients are indicated with the USDA logo and together these comprise 55 percent of the total pounds applied. These materials are extensively used by both organic and non-organic growers. The conventional growers have additional options, but definitely use some of these same materials as part of a resistance management strategy and for other practical reasons. As the chart used, in California, the country’s leading agricultural state, organic farmers use more chemicals per pound than do conventional farmers. 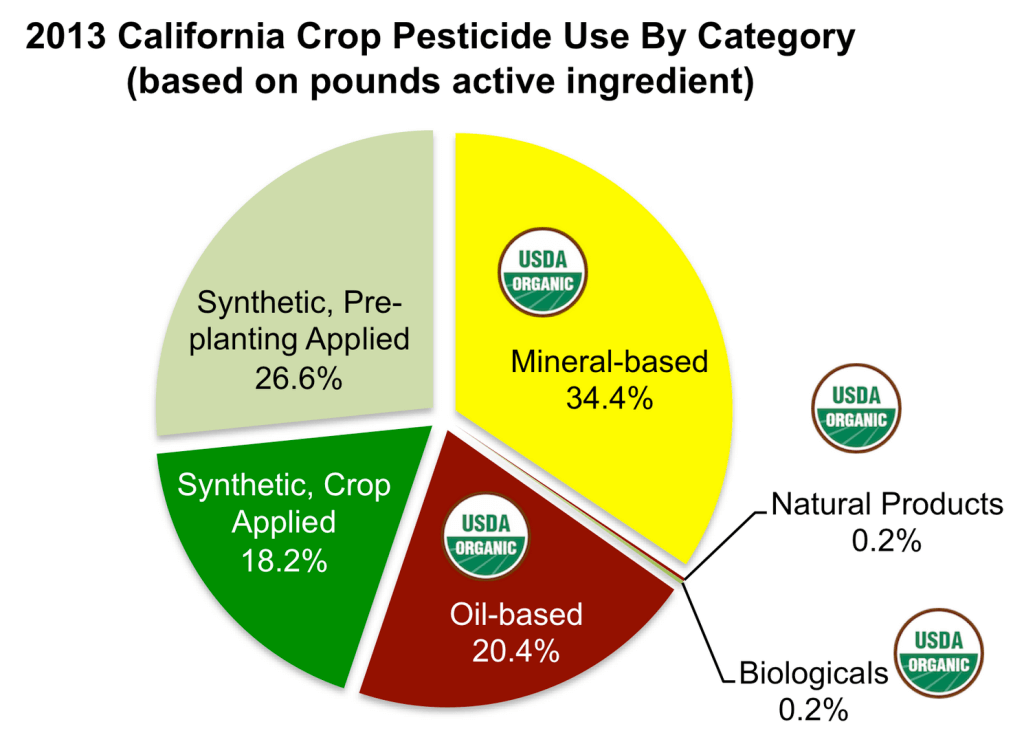 What pesticides are used most often in organic farms?

The mineral-based pesticides include the fungicide/miticide—sulfur, which is the most heavily used pesticide in California by a wide margin (27.6 percent of all the pounds). Sulfur has been used by farmers since ancient times. Other organic-approved, mineral pesticides include lime sulfur, and several different forms of copper. Copper fungicides were discovered in the late 1800s and saved the grape industry in Europefrom a disease introduced from the new world. On the whole, these mineral-based pesticides tend to be high use rate materials (2 to 10 to even 25 pounds/acre/application).  Thus the minerals only account for 12% of the area treated. 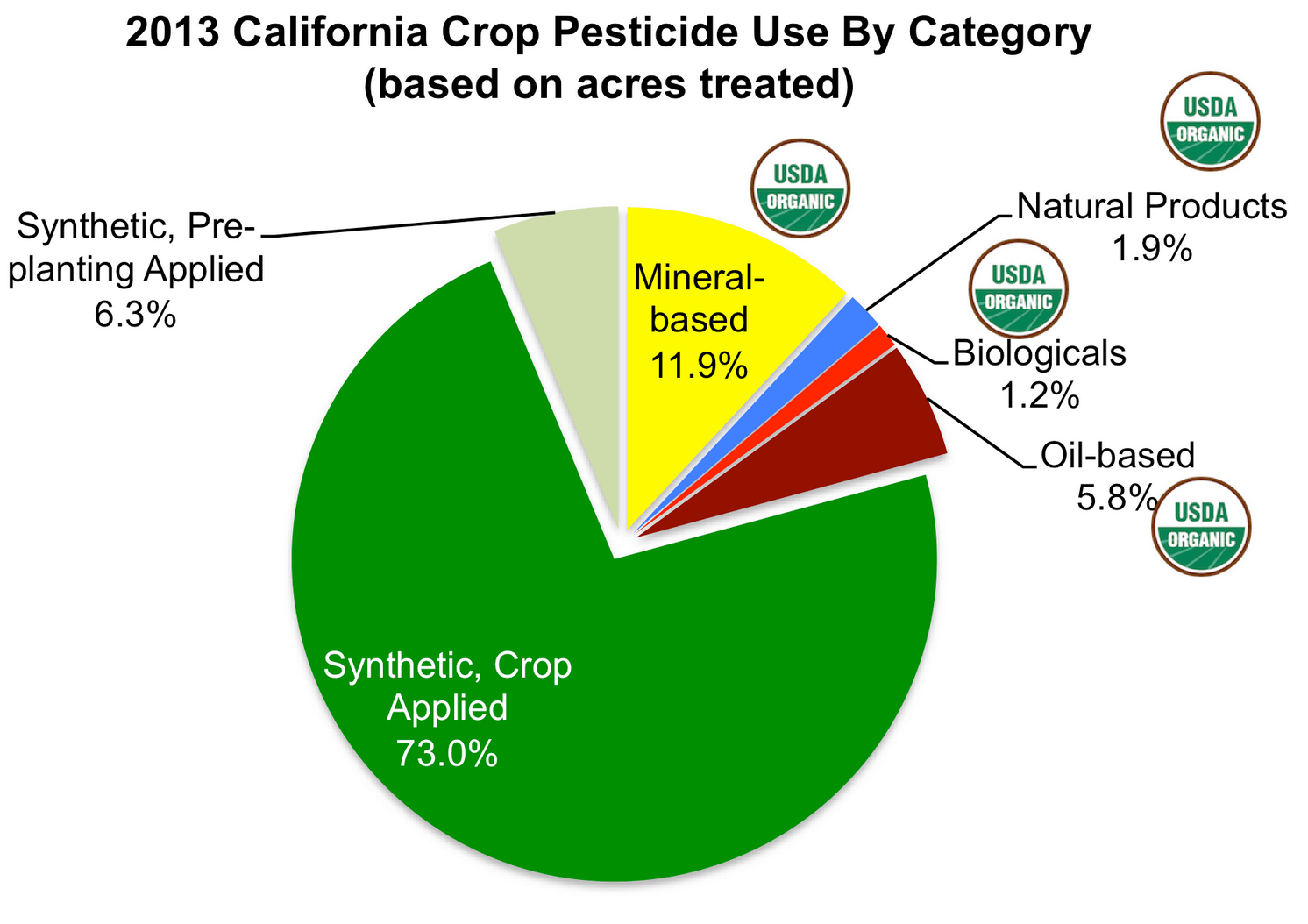 The next major class of organic-approved pesticides are various petroleum-based oils (mineral oil, paraffinic oil, petroleum distillates). These materials are useful for control of several “soft bodied” insect pests and powdery mildew. Again, their use rates are high (~9 lbs/acre) so even though they represent 20.4 percent of the total pounds, they treat only 5.8 percent of the acreage.  Conventional farmers also use these products.

The remainder of the organic-approved pesticides are either natural products (chemicals from plants or fermentations of microbes), or live biological organisms. They are typically very low use rate materials but together still only account for 3.1 percent of the acre-treatments (see chart below).  They include the Bt insecticides that are based on the same proteins that are expressed in Bt-crops through biotechnology.

The fundamental misconception, addressed by Savage, is the issue of toxicity of residues in the food they eat. In fact, the pesticides in use today by both organic and conventional farmers have very low acute toxicity. 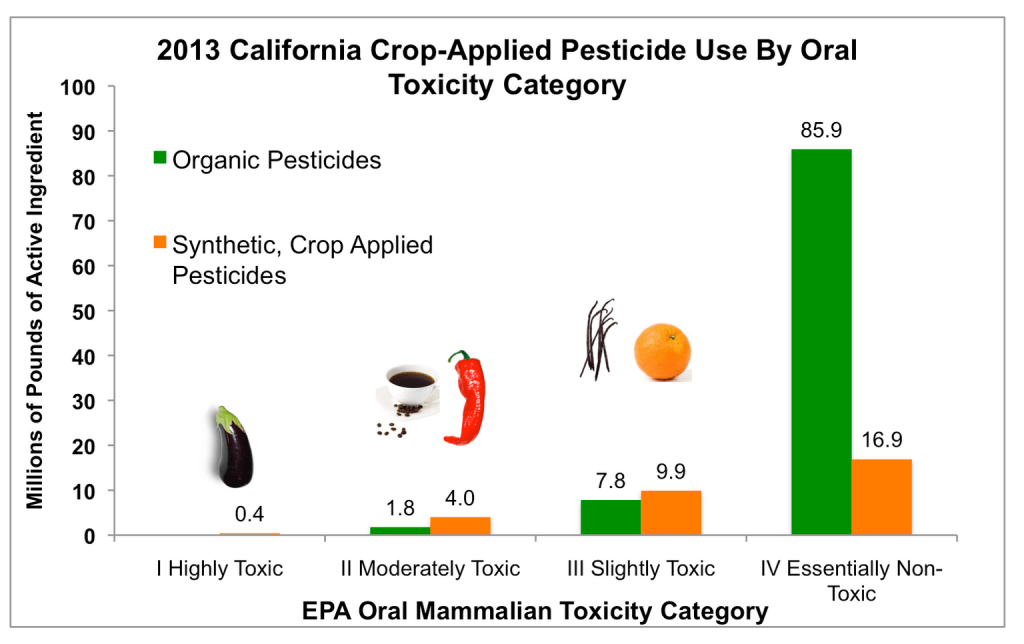 What about the potential for collateral damage to beneficial insects?

Anti-GMO activists have repeatedly claimed that certain chemicals, including the herbicide glyphosate used in conjunction with modified corn and other crops, have been responsible for reducing populations of bees, butterflies and other “non-target” species. Recent studies have challenged these claims. It’s also been documented that certain organic pesticides are far more lethal than any known GMO-linked pesticide. According to the Xerces Society for Invertebrate Conservation, organic-approved pelylysticides including Beauveria bassiana, a naturally occurring fungus, diatomaceous earth, insecticidal soap, horticultural oil, pyrethrins, rotenone (another organic-approved synthetic which is now banned), spinosad, and copper sulfate can be very toxic to bees.

In addition to these pesticides, organic farms are, in certain circumstances, permitted to use chemicals that are supposedly banned for organic use. One of these is methyl bromide, a fumigant that is used to boost strawberry growth. Although use of methyl bromide was banned several years ago, conventional growers can still use it if no viable alternatives are available. But organic farmers can also use it, for largely the same reasons. For “perennial planting stock,” those plants that are grown throughout the year, there aren’t many organic sources of the initial seedlings. So, organic farmers are allowed to use non-organic strawberry plants, complete with methyl bromide injected into the ground, and grow them as “organic” strawberries, as long as the plants are replanted and/or organically managed starting a year before harvesting.

No farmer likes pesticides. If it were possible to grow food without them, nobody would hesitate, but this isn’t possible. For anti-GMO activists to point at organic food as a “pesticide-free” alternative to genetically modified and other conventionally grown foods or suggest food grown using organic methods is safer is inaccurate at best. In fact, pesticide use overall has dropped steadily over the past two decades–and insecticide use in particular by more than 90%–as much due to genetically modified foods as to better tillage and other farming practices–and not because organics are “pesticide free.” All farming practices today are safer–and no particular method guarantees fewer chemicals, let alone fewer toxic chemicals.