Epigenetics Around the Web: The dangers of romance?

Nicholas Staropoli | February 3, 2017
This article or excerpt is included in the GLP’s daily curated selection of ideologically diverse news, opinion and analysis of biotechnology innovation.

This week’s features include: the end of romance, building new pesticides and how the IBM Watson supercomputer is helping study epigenetics in Lou Gehrig’s disease.

I wouldn’t be surprised if there is small-RNA traffic between fungi and plants. They do everything else in their war against each other.

Love hurts. Love scars. Love wounds and marks…Or so the song goes. So why do we so ardently pursue romantic love? Why do we spend so much of our lives searching for the ‘the one’ when so many romances fail?

Well, according to Susanne Vosmer a clinical psychology lecturer at the University of Hull, we should stop this pursuit of the fantasy of all fulfilling romantic love  — because of what we know about epigenetics.

These are debatable points in and of themselves. But where she clearly goes off track is when she tried to link these problems to epigenetics. Vosmer wrote:

Recent advances in epigenetics…suggest a link between social experiences, gene expression, neurobiological changes and behavioural variation. A growing body of evidence explains how the social environment gets into our mind through epigenetic mechanisms and how these affect our offspring. In other words, physical effects caused by our social experiences could be passed on. 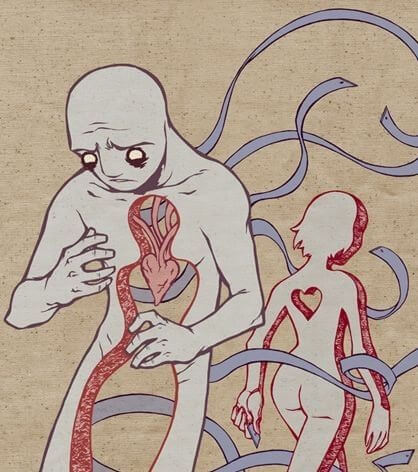 There are a number of problems with her argument. The first is that this idea about emotional trauma influencing epigenetic changes is supported by only weak scientific evidence. Most of the studies that found an epigenetic link between emotional stress and poor health focused on extreme events, such as the Holocaust — a far cry from being dumped by your high school sweetheart when she heads off to college.

The suggestion that epigenetic changes might be inherited missed the mark as well. If traumatic events do influence our gene expression by driving epigenetic changes that cause depression or other mental health ills, they do so by way of our neurons. Last time I checked, you don’t pass your neurons on to your children. But even if the stress of heartbreak did induce the same epigenetic changes simultaneously in reproductive cells and neurons, there are still obstacles to overcome. Among them is epigenetic reprogramming — a process in which a fertilized embryo erases most of the epigenetic marks it receives from mom and dad. Some markings do appear to be re-added, but it’s unclear how, why, or which changes can be passed on.

The final problem is the implication of supposedly passing on your heartbreak. As she wrote, the search for one true love affects all humans. It is ingrained early in human life and dates back at least to the time of Plato (but probably further back). In other words, romantic love is part of being human and always has been. If this ubiquitous quest were so debilitating to our health (and our ancestors’ health), then how are we here today, healthier than at any time in human history? According to Vosmer’s argument, humans long ago would have been programmed at conception to steer away from romance. Clearly, this hasn’t happened.

It’s said that time heals all wounds, well the same can be said of epigenetic marks because they are reversible. In the search to understand what causes Amyotrophic Lateral Sclerosis (ALS or Lou Gehrig’s disease or Motor Neuron Disease), genetic analyses have not provided a definitive answer. According to researcher Roel Vermeulen at the University of Utrecht, twin studies have shown that almost half of ALS risk is environmental, with cigarette smoking having the greatest impact. This has led researchers to  investigate epigenetic changes as a possible contributor to the etiology of the disease. The ALS Research Forum has posted a three-part series that comprehensively describes the current state and future directions of epigenetic research on the disease. The IBM’s Watson Super Computer is even lending a hand. Read Part 1; Part 2; and Part 3.

In its February 2017 edition, The Scientist ran three great reads about epigenetics and plants — and the implicationsfor the future of agriculture. In Plants’ Epigenetic Secrets, Jef Akst discussed how researchers discovered the inner workings and heritability of methylation (an epigenetic process that adds a small molecule directly to a gene which reduces or ‘silences’ its expression) in plants. As mentioned above, humans and other mammals remove this mark from a fertilized embryo’s genome during reprogramming. In plants, this process doesn’t happen and they generally leave their epigenome largely intact from one generation to the next. What this means is that breeders and scientists may someday be able to induce epigenetic changes that could, for example, make a plant drought resistant.

The second piece, on “Plant Methylation Basics,” featured numerous excellent infographics showing how methylation is maintained in a plant’s genome.

RNA Interference Between Kingdoms provided great insight into the evolutionary battle between plants and the fungi that plague them. There is growing evidence that plants and fungi infect each other with RNA molecules that block one another’s gene expression. Numerous scientists believe that studying the cross-talk between these competing organisms can lead to the development of new pesticides and crop protection agents targeting fungal diseases. Monsanto is one company that believes this line of research could lead to new products. John Pitkin, Global Disease Management Lead at Monsanto, told The Scientist:

This is an area we’re definitely watching. It clearly looks like there’s movement of RNA between plants and fungi through the expression of transgenes. Whether those reach the level of commercial efficacy is still in question….I wouldn’t be surprised if there is small-RNA traffic between fungi and plants. They do everything else in their war against each other.