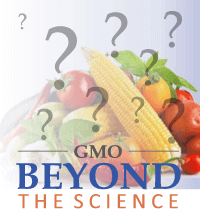 Despite a lack of basic knowledge about agricultural production, consumers are taking a more assertive role in the food value chain. There is much to applaud about the vibrancy of a market that offers consumers what they want. But, as research in behavioral economics has shown, they may not always know what they want or logically evaluate the alternatives, particularly when it comes to public policy in which the consequences and costs are often far from obvious. Research has shown that people are poorly educated about basic science and genetics, which is one of the key reasons why there is so much conflicting results stemming from consumer polls regarding food. 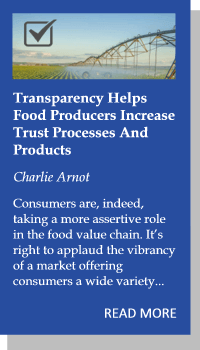 A majority of consumers mistakenly but consistently believe that all unprocessed food is “as nature made it.” This is simply not true. Consider ancient maize, for example. It’s believed that corn was first developed about 7,000 years ago when early agriculturalists began modifying a wild, inedible grass called teosinte. Many people do not realize that it took thousands of years of modifications to create modern corn (sweet corn is only a few hundred years old). When Oklahoma State agricultural economist Jayson Lusk and I conducted a survey on attitudes about what we eat, we found that approximately 49 percent of respondents thought the genetic structure of corn had never varied prior to genetically engineered (GE) corn, which was first grown in 1996.

Our survey also showed that 34 percent of respondents thought genetically engineered (GE) tomatoes contained altered genes but non-GE tomatoes did not, and 32 percent thought fresh vegetables did not contain DNA. In addition, respondents thought that more than 50 percent of corn and wheat acreage was GE. The actual acreage of GE corn is 92 percent, but there is no commercially approved GE wheat. These findings underscore how challenging it is to understand consumer skepticism about GE food. Even in countries such as the United States, consumers have little knowledge and many misconceptions about genetics and agriculture production in general.

Note that the two conventional breeding techniques, crossing plants and mutagenesis, result in the most number of affected genes. The perception that the GE breeding technique is distinctly unnatural may be exacerbated by associations with terms such as genetic engineering, genetic modification (GM) and genetically modified organisms (GMOs).

When Professor Lusk and I asked questions about how many genes are altered by various breeding techniques, a significant proportion of respondents thought GE altered more genes than most other breeding techniques, with the exception of hybridization which is a conventional breeding technique that has been used since the 1920s involving the crossing of two genetically different plants. Many thought traditional selective breeding, which affects tens or hundreds of thousands of genes randomly, did not alter any genes. Respondents viewed it as the most “natural” breeding technique. 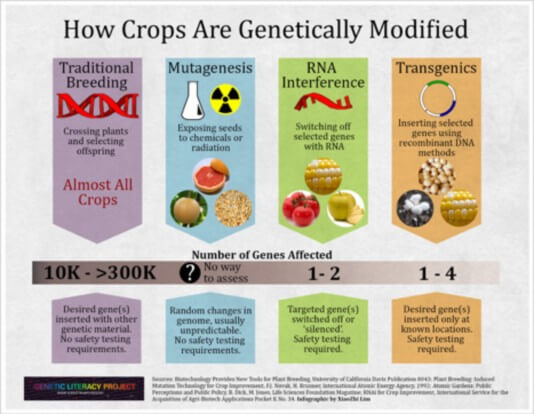 A joint 2016 study by psychologists at the Universities of Pennsylvania and Toronto found a near majority (45%) perceived GE food as “unnatural” and intrinsically disgusting, and thought “GE food should be prohibited no matter the risks and benefits.” Our research has shown that GE animal products are viewed as more offensive than GE vegetables or fruits, and fresh GE foods are viewed as more offensive than processed GE foods. On average, respondents ranked beef as more desirable than corn or apples when all were non-GE. However, if all were GE, then respondents ranked corn or apples as more desirable than beef. These findings indicate that consumer aversion to GE foods is not uniform across all food products.

Does It Matter Who Benefits from GE Foods?

GE foods are often discussed as a dichotomous choice in which all GE food must be good or bad. However, reasons why a specific GE food was developed—whether it is perceived as benefiting consumers or producers—affected attitudes significantly. Currently, the majority of GE foods on the market, such as herbicide-tolerant and insect-resistant soybeans and corn, have been developed to benefit producers rather than consumers (although consumers do reap some benefits in lower prices). In these cases, consumers may perceive that they are being asked to bear some potential risk without any obvious benefit. Applications with more direct-consumer benefits, such as increased nutrition or keeping prices lower, were rated as more desirable. 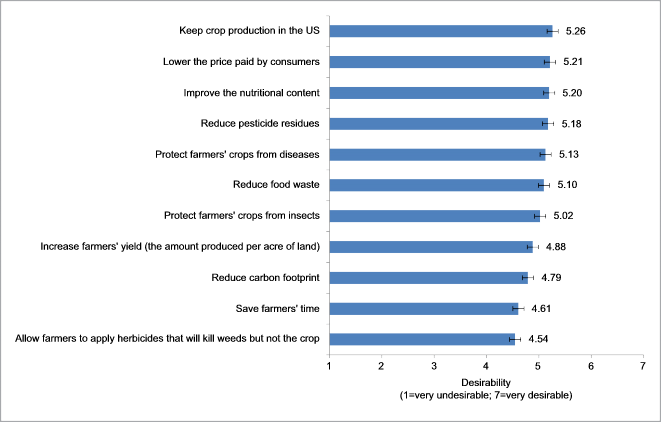 Consumer benefits may not be enough of an incentive for some vexed consumers. The Pennsylvania-Toronto researchers found 46 percent of respondents supported a ban of all GE food regardless of the benefits. This absolutist stance is troublesome as the GE breeding technology was most likely used because other breeding techniques could not provide the same results or consumers did not make the connection between producer and consumer benefits (i.e., lower production costs resulted in lower consumer prices). If breeders could obtain the same results using traditional breeding practices, they most likely would because the governmental regulations associated with getting a GE food to market are more burdensome.

Failure Of Polls To Capture Accurate Consumer Sentiment About Labeling

Advocates of mandatory labels for GE foods often brandish consumer studies to lobby policy makers to pass legislation they claim that consumers desire. But what consumers desire is not as clear as labeling proponents suggest since opinions in surveys are often driven by how the questions are framed, as our research has shown. 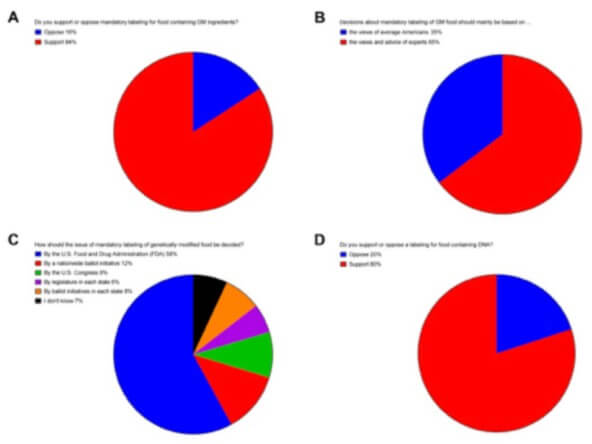 Underscoring the “disconnect” between the public’s demands and their biotechnology IQ was the fact that 80 percent of respondents indicated that they support mandatory labeling for all food containing DNA. This is a ridiculous demand because all plant- and animal-based foods contain DNA.

It should also be noted that there is a potential cost (which could be considerable, although research on this is conflicting) associated with mandatory labeling. Yet, consumers are completely rational to want what to them seems like free information that may be beneficial to a decision-making process at some point in the future.

When all of these findings are taken together, it is clear that consumer opinion polls are inadequate to conclude that policy makers should legislate mandatory labeling and raise serious doubts about their usefulness as a basis for public policy surrounding GE food.

Another consumer concern about food containing DNA is an aversion to unfamiliar chem- icals like deoxyribonucleic acid (DNA) being in their food. A 1983 April Fools’ Day edition of the weekly newspaper in Durand, Michigan, reported that “dihydrogen oxide” had been found in the city’s water pipes, and warned that it was fatal if inhaled, accelerated corrosion, and could produce blistering vapors. The report led to a brief petition to ban the ‘dangerous chemical.’ Dihydrogen oxide is the chemical description of water. This hoax illustrates how a lack of scientific literacy can make something consumed everyday sound scary when called by its chemical name.

Distaste for chemicals is also germane to consumer aversion to GE foods because of pesticides used in food production. Although pesticides are used by both organic and conventional farmers, consumers perceive pesticides as being used only by conventional farmers, and even more so by farmers using GE seeds. Unsurprisingly, research has shown that consumers dislike pesticides, particularly synthetic ones, and are willing to pay to reduce exposure to them. Consumers least desired a GE application that allows farmers to apply herbicides directly to the crop (e.g., GE seeds paired with glyphosate or 2,4-D).

While perceptions about negative effects of GE food are sometimes a moving target, the herbicide glyphosate (active ingredient in Roundup and paired with numerous GE crops) is often at the center of controversy. The dislike for glyphosate is compounded by the negative association many consumers have with Monsanto, the company that discovered it. Glyphosate has become a symbol of consumer aversion to GE foods: a chemical produced by a large corporation bundled with proprietary seed (patent protection for Roundup expired in 2002 and the first generation of glyphosate-tolerant seeds went off patent in 2014).

Some argue that people want mandatory labeling because it allows consumers to easily identify food produced by large agribusinesses which produce crops that are “soaked” in chemicals. But a 2016 National Academy of Sciences, Engineering, and Medicine (NASEM) report concluded that insect-resistant crops are clearly associated with a decrease in the number of insecticide applications. The report indicated that the use of insect-resistant crops or herbicide-resistant crops neither decreases nor increases on-farm biodiversity.

Resentment of large corporations along the food supply chain does not appear to be consistent. Take for example, Monsanto and Whole Foods. According to annual reports, in 2014, Monsanto’s revenue was $15.8 billion and Whole Foods’ revenue was $14.2 billion. Yet, some consumers view Monsanto as emblematic of “industrial agriculture” but not Whole Foods and the multi-billion-dollar organic and natural food industries.

This figure is from our 2015 study in which respondents were provided with information from scientific organizations stating that GE food is safe to consume and poses no greater risk than commodities made using conventional breeding techniques. 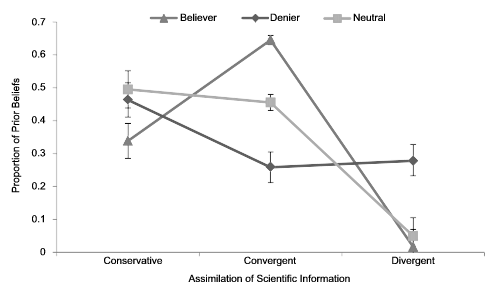 The Cultural Cognition Thesis posits that people are psychologically disposed to form perceptions about risk and policy beliefs based on shared cultural values and ‘tribal identification’. Cultural values are determined using two scales: one scale determines whether a person is egalitarian or hierarchical, and the other scale determines whether a person is communitarian or individualistic. People who are more hierarchical and individualistic are more accepting of evidence that supports the deregulation of commerce—like GE foods. Those who are more egalitarian and communitarian are more accepting of evidence that supports the regulation of commerce—like climate change. Dan Kahan, the major proponent of this thesis, claims that aversion to GE food is not dependent on cultural values or political ideology, and therefore neither theory gives much insight into why some people are unaccepting of scientific evidence about GE food.

Consumer aversion to GE food is perplexing. The average consumer does not put much effort into the estimated 200 or more food-related decisions often made each day. As research has shown, this level of decision overload undoubtedly creates the need to use mental shortcuts, which are often useful, but can lead to errors in decision-making. The lack of perfect information and the overwhelming decision load associated with food consumption creates a situation where misperceptions about food production and food technology persist.

Consumers likely see labeling as an answer to reducing the contradictory reality of both too much ideological information and a lack of scientific information about GE foods. However, labels, including the newly passed US law on mandatory labeling, do not indicate the problems or benefits associated with a particular application, and may only act as a scarlet letter or skull-and-crossbones—which is the stated desire of many pro-labeling activists. Most of the tens of thousands of individual products carrying a Non-GMO label do not have a non-GE counterpart. Therefore, the underlying motive of some labeling is more about marketing and stigmatization and less about providing consumers with useful information to assist in decision-making. 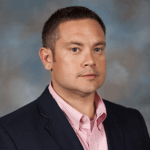 Brandon R. McFadden is an assistant professor in the Food and Resource Economics Department at the University of Florida. His research focuses on consumer behavior, food choice, and attitudes toward contemporary agriculture production. This includes the effects of advertising on GMO labeling initiatives and cognitive biases on genetically modified goods and global warming.