GM technology holds great benefits and promise for Africa, which needs to boost food output and to feed a growing population—expected to climb from 1.2 billion to 2.4 billion by 2050. About half of that increase is expected to occur in Africa.

Without a sharp increase in food production, Africa faces a future of increased malnutrition and reliance on food imports to feed its growing population. This places pressures on the balance of payments of many African countries, creating higher food prices that could spur social unrest and increased dependence on international food aid to fill the gap between domestic food production and food demand.

Africa has been reluctant to adopt GM technology for crop production. That might be changing. Recent developments suggest that many African nations are poised to overcome domestic and international opposition and embrace GM technology as a means of boosting their agriculture sector.

The adoption of GM technology has been slowed by international and domestic opposition. NGOs such as Greenpeace, Friends of the Earth, Genewatch, ActionAid and GM Freeze and their affiliates and allies in Africa have urged countries not to commercialize GM crops. Opponents claim it would mortgage their agricultural sector to large multinational agri-businesses, harm biodiversity, undermine small farmers and expose their populations to the potential health hazards of consuming GM food.

According to Greenpeace, “GMOs should not be released into the environment since there is not an adequate scientific understanding of their impact on the environment and human health.” Zakiyya Ismail, a campaigner for the African Center for Biodiversity, has said, “There is no consensus around the safety of GMOs and there should be long term studies into them before they are released into the food supplies.” Jason Tutu, the communication leader of Food Sovereignty Ghana said, “GMO products carry known health risks such as organ damage, sterility, infant mortality, birth defects, low sperm quality and increase risk of cancer.”

These claims are inaccurate. There is no credible scientific evidence suggesting GMOs are any more hazardous to human health or the environment than conventional or organic foods.  This conclusion was reiterated once again in May 2016 by the US National Academy of Sciences. It is also the conclusion of the Academy of Sciences of Cameroon, Ethiopia, Ghana, Kenya, Mozambique, Nigeria, Senegal, South Africa, Sudan, Tanzania, Uganda and Zimbabwe, and the International Society of African Scientists (ISAS).  ISAS has maintained since 2001 that GM crops are as safe as all other crops, concluding “agricultural biotechnology represents a major opportunity to enhance the production of food crops, cash crops, and other agricultural commodities in Africa, the Caribbean and other developing nations.” 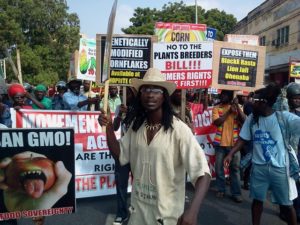 Opposition from European environmental non-profits and EU politicians have all but blocked the adoption of GM crops in Africa.  According to Robert Paarlberg, a recently retired professor at Wellesley College who specialized in food and agriculture policy with a focus on farming technologies and poverty in the developing world, “Europe imposes stifling regulations on GMO foods and crop,” and they’ve used what amounts to economic blackmail to impost their ideological view on Africa:

“Since Africa’s official development assistance (ODA) from Europe is three times as large as ODA from the United States, the voice of European donors in Africa tends to be louder than any American voice.  Governments in Europe have used their ODA to encourage African governments to draft and implement highly precautionary European-style regulatory systems for agricultural GMOs…

European hostility to some kinds of GMO imports has had a disproportionate impact on African agriculture because Africa’s farm exports to Europe are six times as large as exports to the United States, so it is European consumer tastes and European regulatory systems that Africans most often must adjust to.”

An article on the United Nations University website noted the negative impact that EU hostility to GMOs has had on Africa.

“Most European countries do not grow GM crops because European legislation has adopted a precautionary principle to ban GM crops. Many policymakers and organizations in Africa thus see GM technology as something that should be avoided…the precautionary principle has become a political tussle: reports have shown that developing countries in Africa and elsewhere consider their trade relationships with the EU before adopting GM crops, due to the fear of losing market access.”

Nigeria, the continent’s largest economy but a laggard in GM development, is poised to emerge as a leader in African biotechnology development nearly two years after the country passed a landmark biosafety bill. Confined field tests are being conducted for four GMO crops.  They are insect resistant Bt cotton; Bt cowpea (a legume); iron, zinc, protein and vitamin A fortified and nitrogen-efficient sorghum; and salt-tolerant and water-efficient rice. If these trials prove successful the government hopes to commercialize these crops within two to three years.

Confined trials of Bt corn have been approved but none has yet been set up yet. The government has targeted commercial production within five years. The International Institute of Tropical Agriculture (IITA) and the National Root Crop Research Institute of Nigeria (NRCRI) are conducting research on yet another GM crop, vitamin A and disease-resistant cassava.

The government’s approval of GM crop production has been strongly criticized by biotech opponents. According to Philip C. Njemanze, the chairman of the Global Prolife Alliance, the authorization of confined field trials of Bt cotton are:

“dangerous and unpatriotic. They are in violation of food and environmental safety laws in Nigeria. These actions…display total incompetence and unprofessionalism…and calls into question their fitness to administer such a crucial job of securing the food security of the people of the Federal Republic of Nigeria.”

“The concerns raised by some Nigerians on safety of GMOs in the past year were seemingly sponsored by the anti-GM groups who are known all over the world as a small group of propagandists, who would stop at nothing to put biotechnology and GMOs in bad light…the attacks and cheap blackmails launched in the media against GMOs and biotechnology will not deter the agency from ensuring that Nigerians benefit from safe and responsible application of agricultural biotechnology, which remains one of the most viable solutions to food security and wealth creation for any nation desiring sustainable development and economic growth.”

Related article:  Video: Organic vs conventional farming—do we have to pick one or the other? 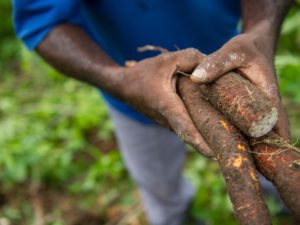 On February 21, however, the government appeared to reverse its opposition to growing GMOs when it indicated it would approve the commercialization of Bt cotton.  Noor Mohammed, chairman of the Parliamentary Committee on Agriculture, Livestock and Cooperatives, said, “We are fully behind home grown solutions to food insecurity and therefore support local biotechnology research…Research and trials on other crops like corn, virus resistant sweet potatoes and virus resistant cassava should continue unhindered.”  He also said the government should re-examine its 2012 ban on importing GMOs and the “ban should be lifted on a case by case basis subject to” analyzing the impact on human consumption and any possible toxicity.

Despite persistent NGO opposition to GMOs, the need to increase food production in the face of rising population growth and the need to grow crops that are drought and insect-resistant and nutritionally enhanced is prompting more African countries to look favorably upon the cultivation of GM crops. Many African nations have observed the success of GM crops in other countries and are rethinking their opposition to the technology. In November, for instance, a delegation of five African nations — Ethiopia, Kenya, Malawi, Swaziland and Zambia — participated in a study group that researched the regulation and commercialization of Bt cotton in India, where it accounts for 95 percent of cotton output. Bt cotton has been so successful that India is now the largest producer of cotton in the world and the second largest exporter.

The use of GM technology in Africa may also get a boost from the recent decision of China to speed up the commercialization of GMO crops, such as corn and soybeans. China is a major trading partner for many African nations and a major source of foreign direct investment and foreign aid.