The Ethiopian Jews, who primarily relocated from Ethiopia to Israel through Israeli rescue missions in the 1980s, form a unique minority of today’s Israeli population. Back In Ethiopia, they were known as Falasha, meaning “strangers”, and have referred to themselves as Beta Israel, or “the house of Israel”.  Their settlements were scattered in the northwestern area of Ethiopia and the border zone with the Sudan.

The approach and methodology of the conventional theory on the origins of the Ethiopian Jewry, as proposed by James Quirin, rejects the existence of an ancestral connection between the contemporary Ethiopian Jewish community and the ancient Israelite-Jews. Proponents of this theory trace the origins of the group to what they perceive as a local Ethiopian separatist movement within Christianity in the 14th-to-16th century.

The influence of this theory with regards to how the media continues to define the origins of the Ethiopian Jewry is overwhelming. A Newsweek article reports: “Historians still debate the precise origins of Ethiopia’s Jewish community but agree that it developed largely in isolation until the 20th century.” The statement reiterates the idea embedded in the traditional theory that the group has developed locally, “in isolation,” without an ancient Israelite connection. Although a majority of historians have subscribed to this hypothesis, not all scholars agree on its premises as the article’s authors insinuate. Scholars, such as David Kessler in his work The Falashas, argue that there is no persuasive reason to assume that the Ethiopian Jews descend from Christian separatists since their faith, among many other reasons, is an authentic form of Judaism that predates Christianity.

In my articles (here, here, and here), I have argued that historical sources and evidence overwhelmingly suggest that the group directly descends from ancient Israelite-Jewish origins. As I demonstrate, sources and evidence dating between the 1st to 4th centuries period and contemporary times point to the historical continuity of the Ethiopian Jews as a group. I stress that the group’s religious structure is fundamentally Jewish and that it is unreasonable to assume that it has developed locally, in what is today Ethiopia, without authentic Israelite contributions involving culture, religion, and genetics. 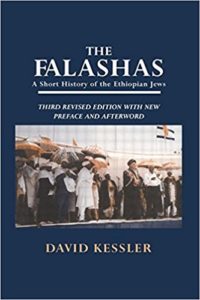 I also base my argument on genetic research from Genetic Literacy Project founder Jon Entine’s book Abraham’s Children: Race, Identity, and the DNA of the Chosen People, which suggests that the group was formed when fragmented Jewish communities in the region amalgamated in the mid-first millennium. (Furthermore, I stress that the Ethiopian Jews share indisputable historical, geographical and probably genealogical connections with Northern Sudan that are yet to be examined by scholars in depth.)

A genetic study that is rarely if ever mentioned in Ethiopian Jewish research was published by the highly regarded American Journal of Human Genetics. As the BBC reports, the study suggests that “Ethiopians mixed with Egyptian, Israeli or Syrian populations about 3,000 years ago.” Professor Chris Tyler-Smith, from the Wellcome Trust Sanger Institute, told  the BBC: “By analyzing the genetics of Ethiopia and several other regions we can see that there was gene flow into Ethiopia, probably from the Levant, around 3,000 years ago, and this fits perfectly with the story of the Queen of Sheba.” Note that the study does not contradict the 2007 work by Entine or other historical evidence. The results suggest that Israelites-Jews entered the region 3,000 years ago, but they were not necessarily consolidated as a group until about 1,500 years ago. Also, note the study does not necessarily confirm the biblical story of affair between Queen Sheba of ancient Ethiopia and king Solomon of ancient Israel.

Related article:  Antibiotic resistance may be dangerous—but it's hardly new

Worth mentioning is the research of the Iraqi Semitic languages specialist Jaafar Hadi Hassan in 2015. Hassan is widely considered one of the most renowned scholars in Iraq and the Arab world. In his research, he criticizes historians for assuming that the Scottish explorer James Bruce was the first to “discover” the existence of the Ethiopian Jewry in the second half of the 18th century. Hassan explains that the Arabs were closely acquainted with the Ethiopian Jews long before Bruce entered the picture.

One of the sources Hassan cites is the work of the 16th century Arab historian Shihab al-Din Ahmad al-Jizani. Writing in the first half of the 16th century, Shihab al-Din explains—as I translated from Arabic: “The Semien country belonged to the Jews of Abyssinia [in what is today Ethiopia] and their name in their language is Falasha [a local name for the Ethiopian Jews]” The Arab historian then goes on to describe interactions between the Ethiopian Jews and the Muslim leader Imam al-Ghazi.

” After completing seven phases, we contacted the country of the Falasha; the first of which is a great valley under a towering mountain of supreme grandiose and extreme height. The name of the valley is ‘Aghnah’ and the name of the mountain is ‘Semien’. “

“This tribe they call Falasha is a large tribe, one of the greatest tribes in Abyssinia. Their faith is Judaism and they abide by the law of the Torah ( . . . ) They were not submissive to the king who invaded, fought, and assaulted them in all parts of their country so that he has surrounded them by the Christian country. He eventually defeated them and forced them out of their fortresses ( . . . ) Most of them converted to Christianity except for a small minority.”

Hence, it is certainly problematic from a scholarly standpoint when a BBC contributor writes, “The main challenge in tracing the origins of a Jewish presence in Ethiopia is the lack of reliable accounts”. We can conclude that since the influence of the traditional theory on the media and the scholarly scheme of research on the Ethiopian Jews is dominating, there is a need for a new unbiased approach to investigate the history and origins of the group.

Ibrahim M. Omer is a 3D Animation specialist with interest in the reconstruction of ancient historical settings. He has worked as an academic in the social science areas of linguistics, culture, and history. He is the author of the academic website AncientSudan.org.