Rarely mentioned by academics, is that the Ethiopian Jews historically owned slaves. Until the second half of the 20th century, Ethiopia was primarily an agricultural medieval society where slavery was a mainstream institution connected to the country’s agricultural system.

Primarily relocated from Ethiopia to Israel as part of Israeli rescue operations in the 1980s, the Ethiopian Jews today comprise a distinct minority of the Israeli nation. Their settlements were spread along the northwestern region and the border area with the Sudan. Thus, the Ethiopian Jews have always represented a border population and a peripheral entity of Abyssinia. Note that Abyssinia is the state and society that dominated the bulk of the geographical region of what is today Ethiopia.

From a scientific perspective, the fact that the Beta Israel have owned slaves is particularly important when it comes to analyzing genetics. It demonstrates the fact that the group, as known today, is not as homogeneous as is often assumed. As I discussed in a previous article, the majority show physical features suggesting ancestries from populations originating in nearby regions, particularly the Nile Valley area of Northern Sudan. A minority resemble native Agaw populations from what is today northwestern Ethiopia. An even smaller minority who descended from former slaves—and are the main subject of study in this article—show distinctive West African physical features, as well as features of populations from nearby savanna regions like South Sudan.

Hagar Salamon, is the first researcher to investigate and publish work on the practice of slavery among the Beta Israel with considerable depth. In fact, Salamon has dedicated an entire chapter of her book The Hyena People titled “Flesh and Bones: Jewish Masters, Jewish Slaves” to this subject. Despite of her genuine efforts, Salamon has over-analyzed the subject. She goes as far as to introduce new vocabulary, such as “flesh” and “bones”, in order to explain the perception of slaves in the Abyssinian society. In reality, the slavery system in Abyssinia was much like the slavery system  established in the Mediterranean basin and North America. 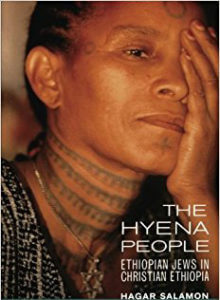 The slaves were either abducted or manipulated to leave their native lands to live in bondage. They were sold in open markets throughout Abyssinia. Even after Haile Selassie abolished slavery in 1942, the institution continued underground until the 1980s, particularly in the rural agricultural areas of the north.

After being bought, the slave was given a new name and forced to convert to the religion of the owner. Although the slaves of the Beta Israel underwent Jewish conversion rituals, they weren’t considered Jewish by their Beta Israel masters. But the conversion accomplished two things: First, it served to further solidify the master’s ownership. Second, it helped establish a religious basis for slavery.

As mentioned earlier, the slaves were brought from the very southern regions of what is today Ethiopia, south of the Abyssinian domain, and from savanna regions in what is today South Sudan. These victimized populations were primarily pagan and lived as small subsistent societies with limited or no contact with the outside world. An undefined percentage of the slaves were of West/Central African descent, an ethnic group called Barya, which settled in the eastern region of what is today South Sudan, perhaps as early as the 4th century CE; they were enslaved by the Abyssinians at a later date. Hence, it is no coincidence that the term Barya is used as a synonym to any “slave” in the Abyssinian society.

Abyssinian traditions describe the Barya, or slaves, with a broad set of physical features, including frizzy hair, harsh skin textures, wide noses, and muscular bodies. However, since a long time has passed subsequent to the abolition of slavery, and slaves were no longer imported, the current Barya are primarily the descendants of mixed relations with slave owners. Worth noting is that the mixed offspring of a free person and a Barya is still considered as an un-mixed Barya—as Salamon explains “The smallest drop of barya blood would make the infant a barya.”

A variety of social rules have regulated the life and restricted the freedoms of the Barya. In Beta Israel communities, for example, the Barya were not allowed to walk too close to religious scriptures. They also were prohibited from burying other Barya in Beta Israel cemeteries. Intermarriage between a Beta Israel and a Barya was strictly forbidden. However, male masters were free to exploit the female Barya as they wished.

The study on Beta Israel genetics that is commonly considered as the decisive scientific evidence on the origins of the Ethiopian Jews, was published in 1999 by Gerard Luctotte and Pierre Smets of the International Institute of Anthropology in Paris. The study has explicitly concluded that the Beta Israel are “descended from ancient inhabitants of Ethiopia who converted to Judaism.” This research has come to represent a popular scientific proof to the conventional theory established by James Quirin; that the Ethiopian Jews do not have an ancient Israelite ancestry.

It is worth noting that these studies do not take into consideration the genetic diversity that characterizes the Beta Israel population, as well as the outcome of this diversity in a probable Israelite genetic heritage. More importantly, and contrary to popular belief, genetic studies are inconclusive when it comes to determining the ancient origins of ethnic groups.

As part of a correspondence with Genetic Literacy Project founder Jon Entine, and author of the book Abraham’s Children: Race, Identity, and the DNA of the Chosen People, I asked: “Do genetic studies that seek to determine the ancient ancestries of populations produce results with 100% accuracy?” He answered:

“Good question. No, they are always ‘guestimates’. It’s analyzing gene frequencies based on sometimes robust data but sometimes scanty data. A lot of it is ‘story telling’—narratives suggested by the DNA from today’s populations and recovered ancient resources. But it can be revised, and plenty of ‘ancient narratives’ have been changed as new data have emerged.”

Interestingly enough, and as I cited in a previous article, a later genetic study–published by the American Journal of Human Genetics and reported by the BBC in 2012— on the ancient origins of Ethiopians concludes that “Ethiopians mixed with Egyptian, Israeli or Syrian populations about 3,000 years ago.”

Ibrahim M. Omer is a 3D Animation specialist with interest in the reconstruction of ancient historical settings. He has worked as an academic in the social science areas of linguistics, culture, and history. He is the author of the academic website AncientSudan.org