[Editor’s note: Matt Ridley is a columnist for The Times (UK), a member of the House of Lords and the author of “The Evolution of Everything”.]

In 2013, the European Union banned some uses of neonicotinoid insecticides to save bees. The verdict on this policy has now come in, from the commission’s own Joint Research Centre (JRC), whose job is to provide independent scientific advice to support EU policy. I have seen the commission’s internal report plus a PowerPoint summary that was shown privately to MEPs. Its conclusion is that the ban has been disastrously counterproductive, resulting in an increased use throughout the continent of more damaging pesticides, mainly pyrethroids, which are sprayed on rather than seed-treated (worse for non-pests) and are especially harmful to aquatic life. It finds the ban has had no benefit at all for bees.

In Britain, for example, the study finds that farmers have more than quadrupled the number of insecticide applications on oil-seed rape (from 0.7 to 3.4 per growing season), but pest pressure has increased. Meanwhile, recent studies have demonstrated that declines among wild bees are driven mostly by land use changes and have not increased since neonics were introduced in the 1990s. In fact, a 2015 study published in Nature Communications found that those wild bees most often found in agricultural areas — and probably most exposed to neonics — are “common” and “dominant”.

This makes sense because neonics are mostly used as seed dressings, absorbed into the plant from germination, rather than sprayed on a growing crop. This makes them more lethal to pests such as flea beetles that eat the crop but less dangerous to innocent bystanders, including bees that collect pollen and encounter lower doses.

[Editor’s note: Below are the conclusions from the JRC study] 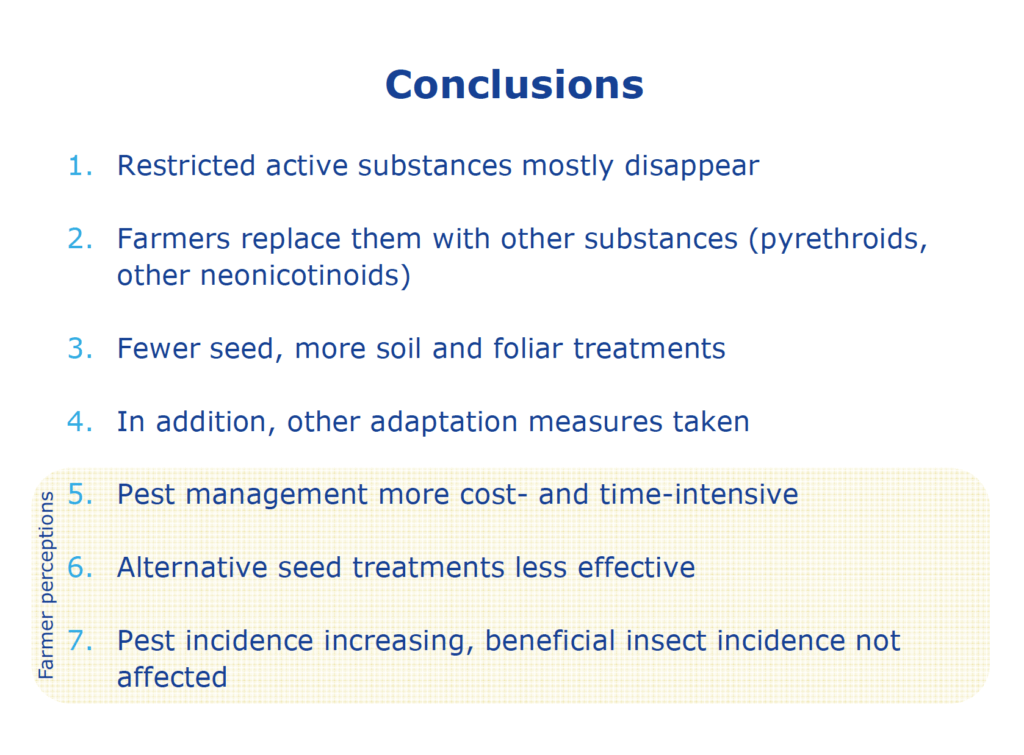 What has the commission decided to do in response to the news that its policy has been bad for wildlife? Suppress the JRC report and double down, of course. It is refusing to release the report and has (I hear) told the JRC that the centre will have to publish it itself in a journal, which would take months and, crucially, delay publication until after an appeal against the ban at the European Court of Justice is concluded. The commission fears it will lose the case, so it has leaked to friendly reporters at The Guardian and Politico (via the activist Pesticide Action Network) that it intends to push forward with a full ban on neonics, except in greenhouses.

Last week Bernhard Url, executive director of the European Food Safety Authority, appeared before the European parliament’s agriculture committee and said that “on the request of the European Commission”, the neonic policy would be based instead on the so-called Bee Guidance Document, even though he admitted this has not been adopted by EU countries. This was a bizarrely one-sided piece of politicised science, written mainly by activist researchers with a conflict of interest, that forces regulators to rely on lab studies often using absurdly high doses of the pesticides while ignoring the many large field studies that overwhelmingly concluded that neonics had no hive-level effect on bees. The document has been reputationally shredded in court.

David Zaruk, a Brussels-based academic, has been documenting the extent to which Europe has become a playground for American green NGOs. European policy is based on hazard, not risk; it measures whether something can cause harm no matter what the exposure. That, along with an extreme interpretation of the precautionary principle (to consider the hazard, but not the benefit, of any innovation), makes it much easier to get things banned in Europe than in America, where lawyers put up a fight. Hence the way US activists now start their campaigns in Europe. Zaruk says: “If you can ban your target substances (glyphosate and certain neonicotinoids are the flavours of the month) in the influence-rich but lawyer-weak left-leaning European Commission, you then take that feather in your cap back to DC and try to build regulatory momentum.”

Perhaps the European Food Safety Agency should drop the pretence that its regulatory decisions are based on science and admit that EU regulations on the environment and health are political determinations driven by whoever can create the most pressure on bureaucrats and politicians, which is almost always these days anti-science NGOs with their vast and subsidised budgets. For those who would prefer we do without insecticides altogether: great idea, but we missed that bus 20 years ago when we turned our back on genetically modified crops. Insect-resistant GM cotton and maize have boomed elsewhere, but work on European crops largely ceased at the behest of the environmentalists.

The GLP mildly edited this Times of London article for reposting on the GLP: Europe’s age of unreason harms its wildlife (registration required)