Ben Locwin | April 20, 2017
This article or excerpt is included in the GLP’s daily curated selection of ideologically diverse news, opinion and analysis of biotechnology innovation.

There are a few things to learn about octopuses: First – the plural of ‘octopus’ is indeed ‘octopuses,’ not ‘octopi.’ Second – they are thought to be, by far, the smartest invertebrates on the planet. They  use tools, solve mazes and puzzles, and generally exhibit a host of ‘smart’ behaviors. They also can do something similar to ‘taste’ with their tentacles, they have blue blood, and they can even see polarized light, offering them a visual experience underwater not shared by some of their cohabitants.

And now we learn that they may be able to edit their own genes to help them adapt to their environment and solve problems.

Octopuses are tremendously de-centralized organisms — billions of their own cells act, to some degree, nearly autonomously to sense and respond or react to the environment in ways that defy our normal everyday experiences. Marine ecologist Rafe Sagarin documents how this de-centralized organizational structure provides unique survival and adaptation advantages in his book Learning From The Octopus. He also explains how this model can be useful for many challenges, including counter-terrorism.

Recently, popular author Sy Montgomery presented some of her work on the octopus, including behavioral observations she made over the span of many months with octopus experts at various aquariums. She captured her account in the book The Soul of an Octopus, and it does a nice job of not anthropomorphizing octopuses, although she sometimes creeps into the realm of wondering what human-like thoughts they’re thinking. We all do this: Pet owners frequently attribute ‘human’ thoughts and precociousness to their furry, leathery or scaly friends. Much of this has to do with our possession of mirror neurons, which allow us to empathize with other humans (and indeed trying hard to do it with non-humans).

It’s a tricky proposition to attempt to understand what creatures are thinking or feeling. We can certainly model and map brain and nervous system activity in non-humans. But then what we have is a model of such activity — not what it ‘feels’ like for them. Similarly, attempts at categorizing which animals are ‘smarter’ than others is destined to fail, because the tests which are set up are determined using human-selected criteria for what ‘intelligence’ should look like. We know that certain birds have demonstrated aptitude for probability, counting and  tool use. In fact, the more we look, the more we find in terms of animals surprising us with their breadth of behaviors and manifested intellect. Some of it is instinct, genetically selected-for over thousands of lineages, as well as taught behaviors similarly selected for evolutionarily. How much the genomes have diversified – as well as specialized – of course plays a tremendous role. But new research adds a peculiar new dimension to the limits and malleability of genetics:

Recent findings by Joshua Rosenthal at the Eugene Bell Center, Marine Biological Laboratory, Woods Hole, Massachusetts and his team, have shows evidence that octopuses, squid, and cuttlefish re-code their RNA transcripts sometimes to an extent hundreds of times greater than other creatures, including insects and humans. Almost two-thirds of RNA transcriptions in squid were found by the researchers to be edited, which likely diversified their evolutionary progress by altering the proteins their cells can produce. It’s possible that these alterations allowed (or caused) some of the complex behavior and apparent intelligence that cephalopods demonstrate. 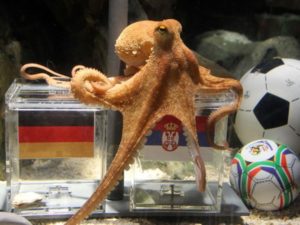 It could be that some of these genetic edits are active ways to produce physiological changes. Rosenthal suggests: “It could be something as simple as temperature changes or as complicated as experience, a form of memory.” It is indeed a potential strategy in genome evolution, and needs much more research to fully understand its ramifications and implications, particularly as far as RNA recoding as an evolutionary diversification strategy is concerned.

Perhaps some of these precocious behaviors in octopuses and other cephalopods that we have a hard time not humanizing are a direct result of the ability to recode and transmute RNA, seemingly at-will, on a large scale. Then the highly de-centralized body and brain are acting in ways that mimic what we’re familiar with: An extraordinarily centralized and complex problem-solving brain. But in our case, it’s very much a top-down system, and for the octopus maybe largely a bottom-up one. Similar themes are found in swarm theory, where incredibly decentralized and individual autonomous activities appear to morph into very orderly and helpful (for the collective) behaviors.

Ben Locwin, PhD, MBA, MS, is a contributor to the Genetic Literacy Project and is an author of a wide variety of scientific articles in books and magazines. He is a member of the Board of Directors for the Seacoast Science Center and is an expert contact for the American Association of Pharmaceutical Scientists (AAPS), an avisory board member for the Association for Talent Development (ATD‘s) Healthcare Community of Practice, and a committee member of the American Statistical Association (ASA). Dr. Locwin has been featured by the CDC, the Associated Press, The Wall Street Journal, Forbes, and other media outlets. Follow him at @BenLocwin