Nearly 15 years ago, Australia joined the ranks of nations around the world that have approved genetically modified crops for cultivation. Yet, because of public concerns and trade worries, a nationwide adoption of GMO canola has been hindered by a variety of moratoriums enacted by state governments.

As a result, the nation has lost hundreds of millions of dollars in economic benefits, while losing a chance to cut herbicide use and greenhouse gas emissions related to the application of herbicides.

The local moratorium movement started in 2004 and lasted until 2008 in Victoria and New South Wales and 2010 in Western Australia, the three largest canola producing states. Moratoriums remain in place in the other canola growing states despite recommendations of removal from independent observers. Here, I will take a closer look at the impact of the decisions that have postponed a widescale GM crop adoption.

In financial terms, the yield increases from GM canola, compared to non-GM, resulted in the loss of over 1 million metric tons of production. Farmers received a lower per hectare profit, calculated through the contribution margin, resulting in over $431 million (AUD$485 million) of lost economic benefits.

Given these results, I will explore the evolution of Australian policy and compare it to the handling of GMO crops in Canada.

Canada was at the forefront of GM crop adoption with the approval of two herbicide tolerant GM canola varieties in 1995 under a scientific evidence-based framework within existing governmental departments. Monsanto’s glyphosate-tolerant Roundup Ready and Bayer’s glufosinate-tolerant LibertyLink were assessed for risk to humans, animals and the environment prior to approval and found to be equivalent to existing canola varieties. The herbicide tolerance allows farmers to spray their canola fields with Roundup or Liberty, improving weed control without damaging the canola plants.

After approval of these two new GM canola varieties in Canada, there were trade concerns related to Japan and Europe, where GM canola varieties were still being evaluated. As a result, the canola industry came together and established a self-imposed system of segregation until Japan’s approval in 1996. After Japan approved GM canola, the segregation system ended as Europe was not a key export market. Having an approach developed by the canola industry rather than the government, resulted in no large trade impacts; Canada continues to be the world’s largest canola exporter with approximately 60-70 percent of the global export market, in spite of the fact that 95 percent of canola produced in Canada is GM.

Australia took a substantially different approach to GM canola regulation and adoption. After evaluating regulatory systems in other countries, Australia decided in 2000 to establish a new office dedicated to evaluating gene technology — the Office of the Gene Technology Regulator (OGTR). As in Canada, the OGTR evaluates new GM varieties based on scientific-evidence to protect the safety of people and the environment. Approval of the same two herbicide tolerant canola varieties, Monsanto’s Roundup Ready and Bayer’s InVigor, came in 2003 after a three-year risk assessment and risk management evaluation.

The response from the grains industry in Australia, which was less cohesive than the Canadian industry, was to lobby the governments to impose a moratorium due to possible trade impacts from the adoption of GM canola. The Australian canola industry believed that a market for non-GM canola oil would develop. That, however, never happened, thanks largely to China’s decision to approve the importation of GM canola and the fact that Europe produces enough non-GM rapeseed to meet its needs.

Australia’s GM opponents pushed for a three-year moratorium, arguing that it would allow sufficient time to determine the potential global demand for non-GM canola. This resulted in an amendment to the GM regulation in 2004, allowing Australian state governments to impose moratoriums on “ethical issues relating to dealings with GMOs”. Phillip Glyde, the Executive Director of the Australian Bureau of Agricultural and Resource Economics and Sciences, commented that:

[T]he development and adoption of genetically modified (GM) food crops in Australia are being slowed by perceptions of consumer resistance to GM foods in both Australia’s domestic and export markets. The view that there could be market disadvantages with GM food crops has led to moratoriums being imposed on the commercial cultivation of GM canola…. This is despite positive assessments by the Gene Technology Regulator of the safety of two varieties of GM canola, for human consumption and the environment [emphasis added]. (Foster and French, 2007)

Allowing government policy to be affected by the grains industry’s worry of trade impacts, not based on issues of health and safety to humans and the environment, is one example of a socio-economic consideration being incorporated into policy. This is largely the only difference between the Canadian and Australian policy on GM canola.

The moratoriums were eventually repealed in the three largest canola growing states of New South Wales and Victoria in 2008 and Western Australia in 2010, for two main reasons. First, the market and expected higher prices for non-GM canola did not develop the way critics hoped. There were occasional, small premiums for small shipments of non-GM canola, but no global non-GM, high-priced market developed. Second, Australian farmers and the canola industry observed the positive benefits of GM canola production that were occurring in Canada and began to pressure state governments to not renew the moratoriums when they expired. An overview of the moratoriums can be found here.

My thesis research uses Canada’s experience with GM canola adoption and Australian post GM canola commercialization surveys to estimate the potential adoption rate of GM canola if the  moratoriums not been imposed. Figure 1 illustrates that a conservative GM canola adoption rate of 59 percent could have been achieved by 2014, compared to the actual 19 percent. The opportunity costs of the moratoriums are measured as the gap between potential adoption (the dotted line) and the actual adoption (the solid line). Between 2004 and 2014, a cumulative area of 4.6 million hectares would have adopted GM canola had the moratorium not been implemented. 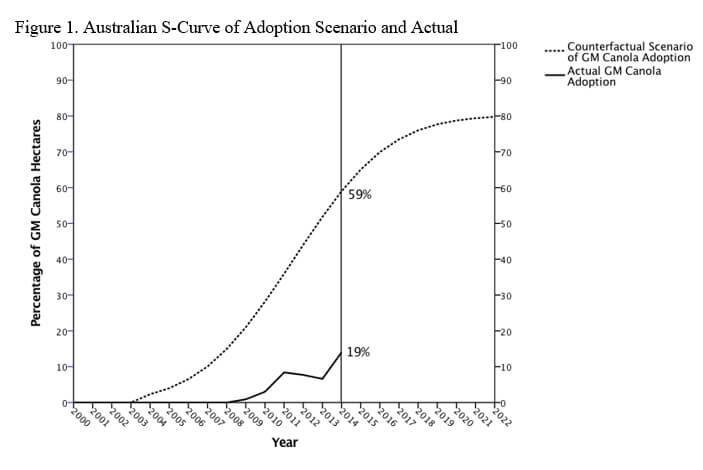 Environmental opportunity costs assess herbicide and fuel use. The environmental impact of herbicides is based on the amount of active ingredients applied and the toxicity through the environmental impact quotient (EIQ) — a formula developed to assist in understanding the impacts chemical applications have on humans, consumers and the ecology. Fuel use is used to measure GHG emissions from additional field machinery passes.

The 4.6 million hectares that would have adopted GM canola, had the moratoriums not been imposed, required an additional 6.5 million kg (14.3 million pounds) of herbicide active ingredients to control weeds. Farmers who use GM seeds end up using lower volumes of herbicides, as weed control is more effective with those seed varieties.

In addition to the environmental impact of increased chemical applications, there also is additional fuel used to make those applications, resulting in higher GHG emissions. Over 7 million extra machinery passes were made in Australia, burning 8.7 million litres (2.3 million gallons) of diesel fuel. Each of these 7 million passes resulted in the needless emission of GHGs due to the moratoriums. As a result, 24,200 metric tons of GHG emissions were emitted due to the moratoriums, equivalent to approximately 5,000 cars being taken off the road in the USA for one year. 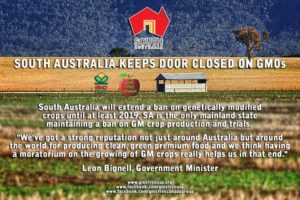 These environmental impacts, highlighted in Table 1, provide evidence of the negative impacts from not adopting GM crops in a timely manner. An often-discussed argument against the adoption of GM crops is the impact they may pose to biodiversity. As shown in the case of Australia, GM canola lowers the environmental impact of production compared to non-GM canola through fewer, less toxic herbicides and a reduction in GHG emissions. Based on the evidence presented above, one of the strongest reasons for adoption of GM crops is the environmental benefits that result from their production.

The discussion of anti-GM policy tends to involve hypothetical concerns and protection of biodiversity from the risk of a new GM crop variety. This discussion does not usually incorporate the risks from the conventional varieties already in production. Essentially, the choice to not adopt GM crops also holds risk. If the goal is biodiversity preservation through minimizing agricultures impact on the environment, then the adoption of the more environmentally friendly and sustainable GM crops is the best solution.

While there are many production benefits associated with GM crops, there may also be negative short-term drawbacks from trade impacts and market loss from non-GM markets. However, in the instances discussed, these trade effects have not materialized in any substantial impacts.

Thus, the policy of preventing the adoption of GM crops harms the environment and limits farmers’ abilities to choose what is best for them and their land. In the context of developing countries, this may be regarded as a form of modern day Western colonialism impacting the development of some of the world’s poorest communities. When it comes to food security, Australia was not harmed from the delayed adoption of GM canola, but the effects could be staggering to a food insecure developing country.

Scott Biden is a PhD Student at the University of Guelph in the Department of Food, Agricultural and Resource Economics, and affiliated with International Development Studies, in Ontario, Canada. His research in this article was completed under the supervision of Dr. Stuart Smyth for his Master’s Thesis at the University of Saskatchewan. You can follow him on Twitter @realScottBiden