Isaac Ongu | May 4, 2017
This article or excerpt is included in the GLP’s daily curated selection of ideologically diverse news, opinion and analysis of biotechnology innovation.

On April 22, Ugandan scientists and their supporters joined in a worldwide event — the March for Science — aimed at reminding the public and lawmakers of the importance of using scientific evidence when making policy and funding decisions. The main march took place in Washington D.C., but was joined by supporters in more than 600 communities around the world. In Uganda, the event offered a chance for a community of scientists to step away from their work on sweet potatoes and “NEWEST” rice to bring the public’s attention to the importance of their research. It was also an opportunity to use Earth Day to remind everyone that scientists, too, are  “friends of the Earth”.  In Uganda, it was notable that the event was heavily flavored by young scientists stepping out into the public.

It was a chilly morning following a heavy downpour that lasted for nearly 3 hours. The march kicked off at Makerere University College of Natural Sciences. Uganda’s oldest university is home to students pursuing a bachelor’s degree in biotechnology, which has been offered for a decade. Two students studying biotechnology answered questions about why they thought the march was necessary and whether they were aware of the global debate surrounding the products of the profession.

Aisha Namugalu, a first year student, said she came out to march because of a love of science and biotechnology. However, she said she was not aware of the global debate over genetic engineering in agriculture. Since there are GMOs already on the market, she said she sees no reason for there to be issues around it. Aisha seems unaware that when she graduates, she will meet resistance from those who are against genetic engineering. The second student was Jonan Twinamatsiko, a final year student who helped mobilize fellow students for the science march. Unlike Aisha, Jonan is well aware of negativity aimed toward modern science. He has worked to urge legislators to provide a better environment for young scientists to thrive. Jonan, who founded the Makerere University Biotechnology Society, said the march for science was timely and an opportunity to be a part of this effort to push back against those who place ideology ahead of science. He also thought it was a way to break free from the boredom of the laboratory and mix with the community and other scientists. It was a way of celebrating the impact of science in every sphere of life.

Both young scientists expressed disappointment with the absence of the country’s senior scientists, who they wanted to see in leadership positions for the march. Those senior scientists, perhaps feeling that science should speak for itself, missed an opportunity to come out to explain how they are “saving” communities from hunger and diseases. And how those efforts will not cause more harm. 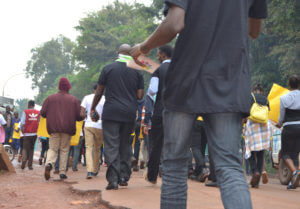 In general, scientists are known for keeping to themselves — working away from the public’s eye. In science, everything follows tested principles and theories that must be replicated to the same effect. And so it is easy to think of scientists as boring — laboring away in laboratories working on research projects. But this has created a vacuum that has been filled by ideologists and activists, who see science as a democracy — where persuasion should carry the day and where “alternative facts” can be embraced.

This march for science put the spotlight on an Earth Day that might otherwise have gone largely unnoticed. Could this move by scientists to “reclaim” the Earth Day show that they understand the planet better? The march was revolutionary because it is one of those rare occasions where people walked for, not against something. This march brought out the fact that love, not rage, can bring people together to walk happily rather than angrily.

The event was test passed by Cornell’s Alliance for Science program, offering a chance for science lovers to rise and speak facts to ignorance, to help influence policy formulations and implementations. In Uganda and elsewhere in Africa where the march took place (Kenya, Ghana and  Nigeria), the Cornell Alliance for Science fellows played key roles in making these events successful.