[Editor’s note: As has been widely reported, conspiracists who believe that vaccines are responsible for alleged rises in cases of autism have convinced the Somali community in Minneapolis to forgo childhood vaccines. That’s led to a full-fledged health crisis–dozens of cases of measles in recent months. According to a report in the Washington Post, anti-vaxxers infiltrated the Somali community in 2008, fanning fears. A University of Minnesota study dispelled the myth that autism rates were any higher among Somali children, but the anti-vaxxers continued to preach paranoia, led by Andrew 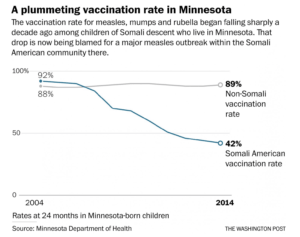 Wakefield, the discredited former gastroenterologist whose 1998 study suggesting a connection between vaccines and autism was retracted; he was later barred from practicing medicine. Vaccination rates plunged from 92 percent in 2004 to 42 percent in the last reporting period, 2014, and is reportedly even lower now. This report investigates the key US group funding the anti-vax effort in Minnesota and across the United States, the Organic Consumer Association–and its deep ties to the anti-GMO movement’s leading conspiracy-promoting group, US Right to Know.]

On April 30, 2017, anti-vaccine groups held a community meeting in Minneapolis “to discuss measles and vaccines in the Somali community”. The goal of the meeting was to convince the Somali population that the MMR vaccine was more of a risk than actually contracting measles. Doubt was their product. The groups hosting the meeting included several anti-vaccineorganizations with relatively small budgets. The one outlier is the Organic Consumers Association (OCA), which also happens to have a sizeable budget. [Read the GLP’s profile of the OCA here.]

In the late 90s, the OCA began as the “Pure Food Campaign” by activist Jeremy Rifkin who had spent a large part of that decade campaigning against the use of genetic engineering in crop breeding and agriculture. Since 1998, the organization has been run by a protege of Rifkin’s, Ronnie Cummins. Cummins has expressed his feelings on vaccination: “It’s the same position [I have] as on human vaccines. They are dangerous, and that’s why I didn’t vaccinate my kid.” OCA has also lobbied the National Organic Standards Board (NOSB) to remove vaccines from organic standards.

Today the Organic Consumers Association is part of Health Liberty, a coalition of groups campaigning against the use of genetic engineering, vaccines, and fluoride. More recently the coalition became financially involved with a proposed ballot measure that sought to label food in California that contains genetically engineered ingredients.

To lead the campaign they brought in activists Gary Ruskin, Stacy Malkan and Pamm Larry.

Gary Ruskin was asked by the Los Angles Times in 2012 about his connection to Health Liberty’s founder, Joseph Mercola, described by Science Based Medicine as a purveyor of “tabloid journalism, late-night infomercials, and amateur pre-scientific medicine”.

Ruskin responded, “We don’t endorse everything our supporters say.”

Mercola was Ruskin’s number one campaign contributor. Ruskin seemed to insinuate that they can agree on one issue, such as their ballot initiative, but disagree on issues such as childhood vaccinations. However, in 2006, Ruskin called a campaign to educate youth about the human papillomavirus (HPV) and a new vaccine to fight it, “deceptive and dishonest”.

When the measure failed, at the behest of the OCA, the three began a new organization, US Right To Know, which is funded almost entirely by OCA. [Read GLP’s profile of US Right to Know here.]

After joining forces with Carey Gillam, fired last year by Reuters after years of what scientists say was biased reporting targeting mainstream science support for the safety of agricultural biotechnology, they began using a technique perfected by the tobacco industry and climate change deniers under a new organization, US Right To Know (US RTK). Broad freedom of information act requests were filed on professors that communicate with the public about the safety of genetic engineering when used in conjunction with seed breeding. This technique is often used to intimidate such professors as emails can easily be cherry picked to smear just about anyone.

Ruskin would change his tune in regards to supporters of a cause when it comes to any connection with climate change deniers, as his web page attacks anyone pro-GMO remotely connected to climate change deniers. Even when they are on record as agreeing with the consensus, such as Jon Entine of the Genetic Literacy Project.

Also on the US RTK payroll is journalist Rob Waters. While the OCA uses the discredited Andrew Wakefield to promote the debunked idea that vaccines are connected to autism to Somali parents, Waters himself once wrote for Stat News:

“….discredited British physician Andrew Wakefield, who falsified data to imply a link between vaccines and autism. Wakefield’s medical license was revoked for a series of ethics violations, and most in the mainstream medical community blame him for raising unjustified doubts about the safety of vaccines.”

Even more shocking is the involvement of Stacy Malkan, who previously worked with the organization Healthcare Without Harm to vaccinate millions in the Philippines against measles. Once tweeting that “Hell hath no fury like a mother whose child has been sickened”, mothers like Suaado Salah now have sickened children caused by misinformation from Malkan’s financial backers. 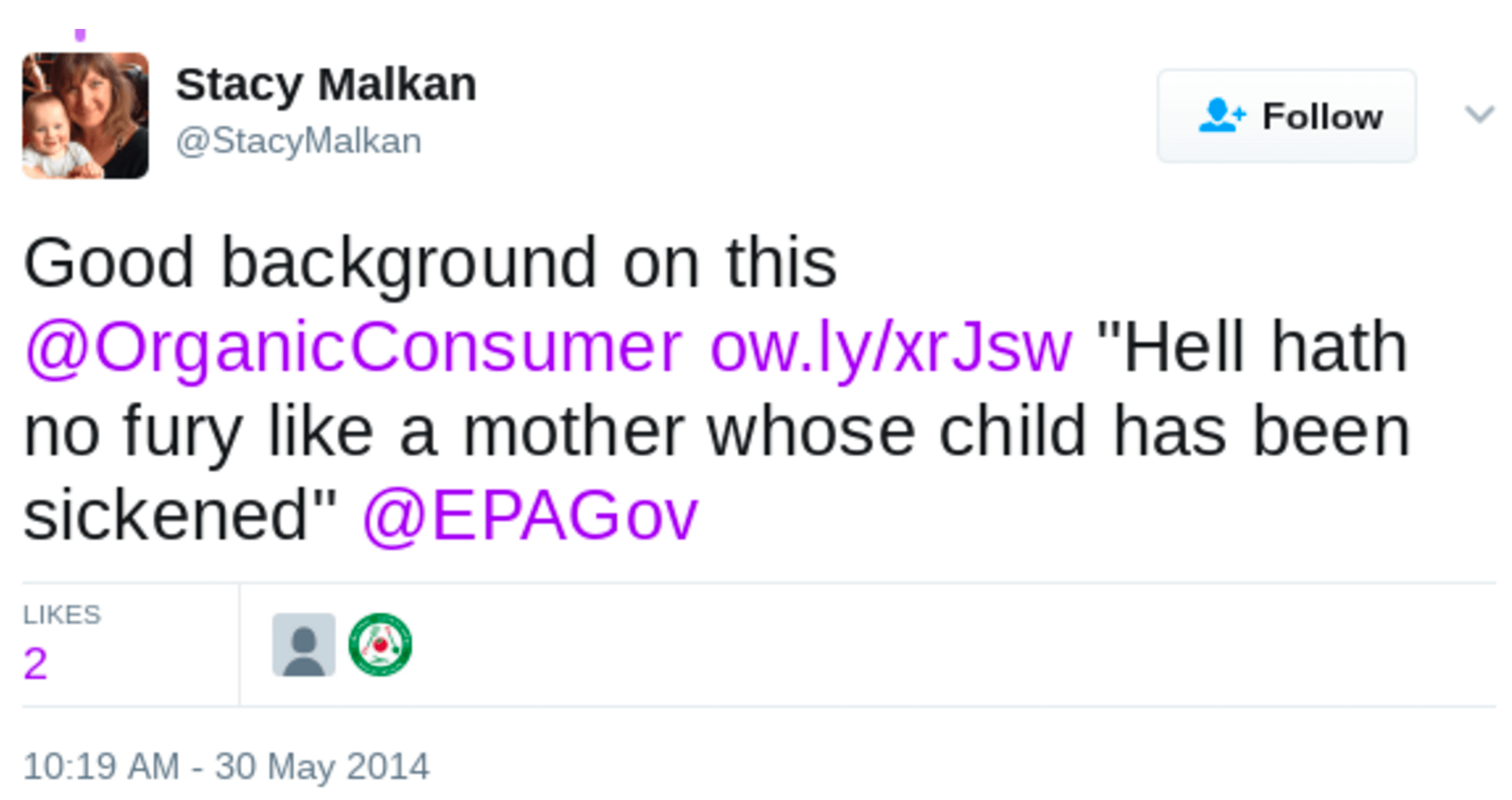 Carey Gillam makes sure that her own children are vaccinated while taking money from those seeking to keep less privileged people from having the same health care access.

Using USRTK as a front, OCA has managed to get a lot of press attention for their causes. The New York Times, Global News, WBEZ, Mother Jones, the Boston Globe and most recently the Canadian Broadcasting Company, which served as a vessel for an attack on an internationally respected biotechnology researcher [Read GLP Daily Digest here; read response by plant scientist Kevin Folta to USRTK’s attack piece here] have all published articles smearing professors based on cherry picked emails without discussing the weakness of such sources. According to the Union of Concerned Scientists:

The use of open records laws to harass researchers emerged with the growing use of electronic communications. Conversations that used to take place over the phone or in person are now conducted by email, a format that leaves a permanent record. When these email discussions are made public through records requests, the privacy that academics have long enjoyed in discussions with colleagues is compromised. This can have a chilling effect on the frank exchange of ideas and constructive criticism, a crucial part of the scientific process.

Abuse of open records requests can also hinder researchers simply by hijacking their schedule. Complying with requests may take dozens or even hundreds of hours of researchers’ time, putting their real work on hold or on the back burner for a long while. This may often be the main purpose of such requests.

Organizations like the OCA are able to actively fundraise using public fear of biotechnology and pesticides, but it often goes unreported that a lot of this money is used to fight childhood vaccination and prey on vulnerable communities. Major donors to the OCA, like Dr. Bronner’s, and the journalists that work with US RTK are just as responsible for this measles outbreak as the OCA is. They can’t do much damage if they are not given podiums to preach from.

In addition, we cannot expect the harassment of academics to end with crop and food biotechnology professors. With their money, skillful manipulation of media, and success at seeding doubt using cherry-picked emails, vaccine researchers and public health officials should be very alarmed at these tactics which could be aimed at them shortly. When we continue to need new and improved vaccines, thwarting research could have far-reaching and long-lasting harm to public health.

Mary Mangan, Ph.D., received her education in microbiology, immunology, plant cell biology, and mammalian cell, developmental, and molecular biology. She co-founded OpenHelix, a company providing training on open source software associated with the burgeoning genomics arena, over a decade ago. All comments here are her own, and do not represent OpenHelix. Follow her on Twitter @mem_somerville

Stephan Neidenbach is a middle school teacher in living in Annapolis, Maryland. He holds a BS in business administration from Salisbury University and an MS in Instructional Technology from University of Maryland University College. He started and runs the Facebook group We Love GMOs and Vaccines. Follow him on Twitter @welovegv