Colon cancer rates spiking among millennials, but no one knows why

A shot across panic’s bow was fired recently via the medical community’s warning of an alarming increase in colon cancer rates among Millennials. But just what’s behind this buzz circulating among clinical practice centers nationwide?

Recent longitudinal observations have revealed an interesting trend – that colon cancer diagnoses among Millennials are ‘elevated.’ Certainly, cancer has myriad root causes and contributing cofactors, so pinning this finding on one particular element would be difficult, and at this point, premature. It won’t be surprising if we soon see activist websites picking up on this information in the near future and spinning yarns suggesting the increased presence of GMOs is to blame for these rising colon cancer rates. Of course, it would be a non-scientific correlation, and we could just as easily say that grocery stores having differentiated bins of organic produce and grass-fed beef is as likely a culprit as any GMOs. After all, only a couple hundred years ago, with no GMOs present, life expectancy was only about 30 years.

However, if you look back to the 1890s, you can find colorectal cancer rates as high as those being found in Generation X and Millennials recently. Young and middle-aged adults are showing patterns in these cancers not seen in over 100 years, according to the authors of a recent study. Lead author Rebecca Siegel, of the American Cancer Society noted, “People born in 1990 now have double the risk of colon cancer and quadruple the risk of rectal cancer compared to people born around 1950.” 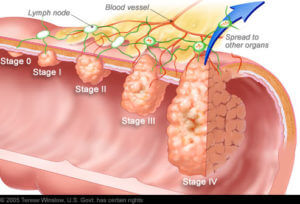 It’s not clear if this pattern is bespeaking an ominous root cause within the environment or diet (because, remember – these rates were also estimated in 1890 and before). But because we have no evidence linking GMOs to these cases, the public needs to resist the temptation to make simple associations. After all, there weren’t GMOs in the 1890s, and that’s where we see similar rates. Could it be sessile lifestyles? Too much sitting? Not enough fiber? Some of these are measurements we can make, but they come from self-reported data (which is considered very low-fidelity), and the further back in time you probe for this information, the less accurate it becomes.

A major risk factor for younger people experiencing colorectal cancer incidence is that they are about 60% more likely to be diagnosed with later-stage disease, since they often wouldn’t suspect symptoms from earlier stages, and nor would their primary care physicians be looking out for this via screening either.

Siegel emphasized that colorectal cancer screening should start at age 50 years for average-risk individuals, and at age 40 for those with a family history of colorectal cancers or adenomas in a first-degree relative. This would allow sight into earlier age groups before any extant colorectal cancers had as much time to progress to more significant stages.

Ben Locwin, PhD, MBA, MS, is a contributor to the Genetic Literacy Project and is an author of a wide variety of scientific articles in books and magazines. He is an expert contact for the American Association of Pharmaceutical Scientists (AAPS), a committee member of the American Statistical Association (ASA), and has been featured by the CDC, the Associated Press, The Wall Street Journal, Forbes, and other media outlets. Follow him at @BenLocwin