Genetic modification has had a dramatic impact on crop production, agricultural sustainability and the economics of farming, according to a new study out this week. The peer reviewed analysis [note: the environmental analysis journal paper is now in print; the economic paper is forthcoming], prepared by the global firm PG Economics, analyzed data on farm production between 1996 and 2015 in the United States and the 25 other countries that grow GMOs.

“Since 1996, farm incomes have increased by $167.8 billion,” the report concluded. This is equivalent to having added 5.2 per cent to the value of global production of the four main crops of soybeans, maize [corn], canola and cotton.”

In just the last year, “direct global farm income benefit from GM crops was $15.4 billion. The economic benefits have been huge. It has also helped alleviate poverty for 16.5 million, mostly smallholder farmers, in developing countries, the authors claim.

Many studies have previously demonstrated the economic benefit to farmers in developed, but especially in developing, countries that have embraced GM crops. Environmental gains from increased productivity and reduced fossil fuel use have also been tallied.

But a number of anti-GM activist organizations have cited “reports,” most recently a New York Times article last fall, that claim the opposite has happened–that there has been no increases in yield and no ecological or environmental benefits have been realized. That story, however, has been roundly criticized by scientists for its methods of calculating and comparing yields. And unlike the New York Times story, which was almost entirely anecdotal, the economic data in this report have been published in a peer-reviewed journal, and the environmental data is about to be.

The report said the largest gains in farm income in 2015 had arisen in the GM corn sector, largely from yield gains, while insect resistant crops had added $46 billion to the income of global maize farmers, since 1996. 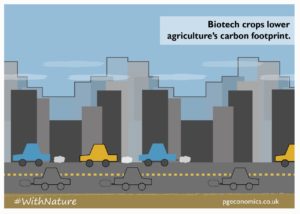 The study, which was funded by Monsanto (more on that later), found that in the 26 countries that have allowed genetically modified maize, soybeans, cotton and canola: 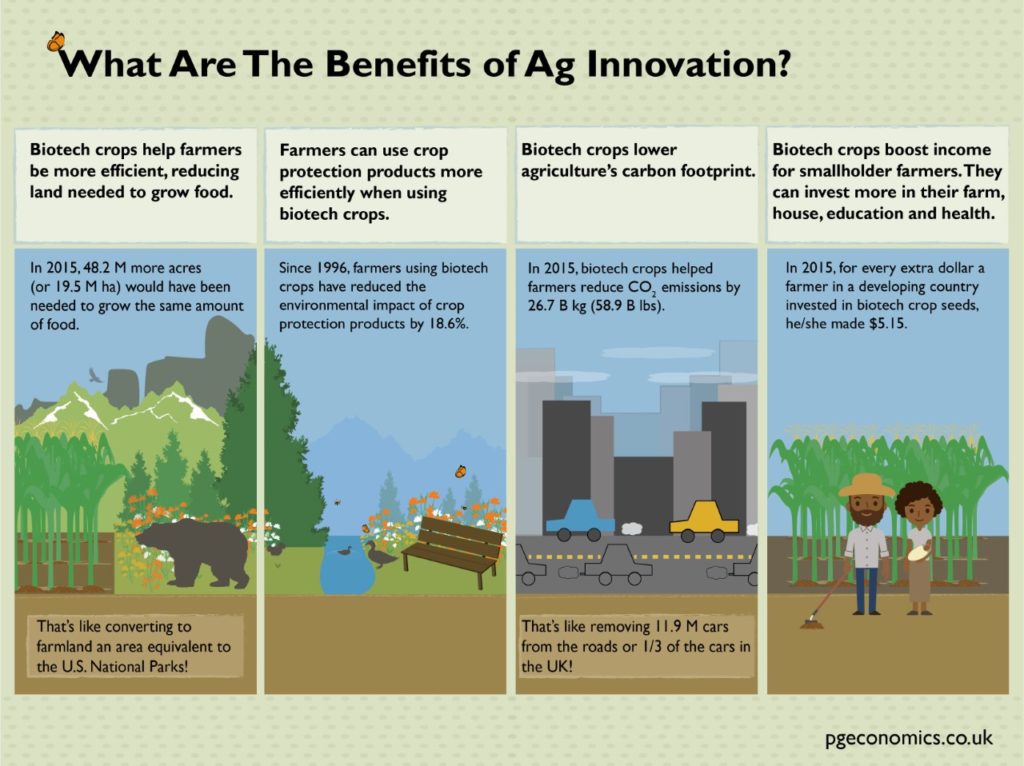 For poorer, smallholder farmers in developing countries, the economic benefits have been quite favorable:

The study showed that GM technology is popular because it enables farmers to get higher yields and spend fewer resources on pests and weeds, study author and PG Economics director Graham Brookes said. This means higher incomes, which has enabled farmers in developing countries to better feed, clothe and provide good medical care, education and housing for their families. Brookes continued:

The report findings are consistent with the large volume of peer reviewed literature which has examined these issues in recent years. The only ‘reports’ that draws different findings, claiming that the technology has not delivered yield gains or benefits for farmers or environmental benefits for society, are typically not representative, inaccurate and misleading pieces that are not published in peer reviewed journals, like the New York Times article in October 2016.

The report also disclosed that it was funded by Monsanto. Such funding from a wide range of private sector sources is not unusual for PG Economics reports (and in fact, private sector funding does account for about half of scientific research and development projects in the United States, according to a number of sources). According to Brookes:

The company has no input into the analysis, aside from providing some data (e.g., the cost of seed, where relevant) and has no say or input into the findings and conclusions. It is a standard practice and requirement of all studies we undertake, whether for private companies, non-government organizations, public bodies or governments that we undertake such work independently and objectively, without interference or influence from sponsors. This is a common and respected practice in the research sector and in 30 years of undertaking research analysis and consultancy work of this nature, no private sector sponsor has ever tried to influence or interfere with any study we have undertaken.

The report did include a warning: in areas where herbicide resistant crops are popular, “some farmers have relied too much on the use of glyphosate to manage weeds in GM HT crops and this has contributed to the development of weed resistance.” Today, about 36 weeds resist glyphosate, including a few that are not glyphosate tolerant.

According to the report, “there is a growing consensus among weed scientists for a need for changes in weed management programs in GM herbicide tolerant crops,” including using other herbicides with different chemical mechanisms, and as part of an overall weed management system. And, most importantly, resistance to glyphosate is not a problem unique to genetic modification.