Nicholas Staropoli | June 19, 2017
This article or excerpt is included in the GLP’s daily curated selection of ideologically diverse news, opinion and analysis of biotechnology innovation.

This week’s features: A professor’s troubling politicization of epigenetics in Gizmodo, Men’s Health quotes me on male fertility but mistakes correlation for causation. Plus see what’s trending on the Epigenetics Literacy Project.

On a larger scale, the amount of stress that Americans are going through now, because of Trump—there is going to be an evolutionary consequence.

“Can Superhuman Mutants Be Living Among Us?” That’s the question posed to several scientists by the science-blog Gizmodo in the latest installment of the feature Giz Asks. Writer Daniel Kolitz polled evolutionary biologists, academics, and futurists and asked if they thought it was possible that superhumans exist now of if it’s scientifically plausible for them to be created in the future.

Many of the experts responded with doubt, some noting that it was highly implausible for humans to acquire something like telepathy through genetic mutations. “Some superpowers are always going to stay firmly in the range of the fantastical; to quote Star Trek: ‘you can’t change the laws of physics’,” remarked Mark Lorch a professor of science communication at the University of Hull. “I would say flight, mind control, telepathy [are the least plausible superpowers]. I’m not even sure how mind control and telepathy could occur… Flight would require us reshaping our body beyond just getting wings,” Penn State PhD student Asia Murphy said.

The question has become more intriguing in recent years with the explosion of CRISPR/Cas9 and with it the possibility that scientists may soon be able to edit the human genome. Several of the experts cited CRISPR in their responses, including Peter Ward, a biology professor at the University of Washington, “[With CRISPR/Cas 9] you can put a new gene into an organism, or you can tweak a gene and turn it on where it had been turned off, or turn it off where it had been turned on.”

But then Ward went way off the deep end with his response, after claiming that Lamarckian evolution is correct (it isn’t), he added:

We’re finding more and more that, for instance, people who have gone through combat, or women who have been abused—when you have these horrendous episodes in life, it causes permanent change, which is then passed on to your kids. These are actual genetic shifts that are taking place within people. It’s called epigenetics, and that too can cause huge evolutionary change.

On a larger scale, the amount of stress that Americans are going through now, because of Trump—there is going to be an evolutionary consequence.

Setting aside politics for a moment, the idea that Trump is causing trauma akin to abused women and that trauma is causing changes in our evolution is (to put it bluntly) lunacy.

These comments strike at the heart of the greatest misconception I encounter about epigenetics: the idea of inherited trauma. The claim follows that life experiences are so devastating for the individual (or group of people) that epigenetic changes occur and are passed on to the next generation and to the next and so on. Some research has claimed to have detected this in Holocaust victims and their descendants–although doubt abounds about the validity of these studies.

The reality is we just don’t know what effect–if any–traumatic events have on epigenetic modifications.

Furthermore, these comments seemingly have nothing to do with the question. Ward is twisting and forcing this science into his answer to fit his political agenda. It’s akin to when a climate denier uses the one study out of a thousand that claims the climate isn’t changing.

Ward has done no work in this area and it’s clear he knows very little about it. He does no molecular biology work, his publications are in astronomy and paleontology. Actual scientists who work in epigenetics took to Twitter to criticize Ward. John Greally, faculty scholar for epigenomics At Albert Einstein College of Medicine tweeted: 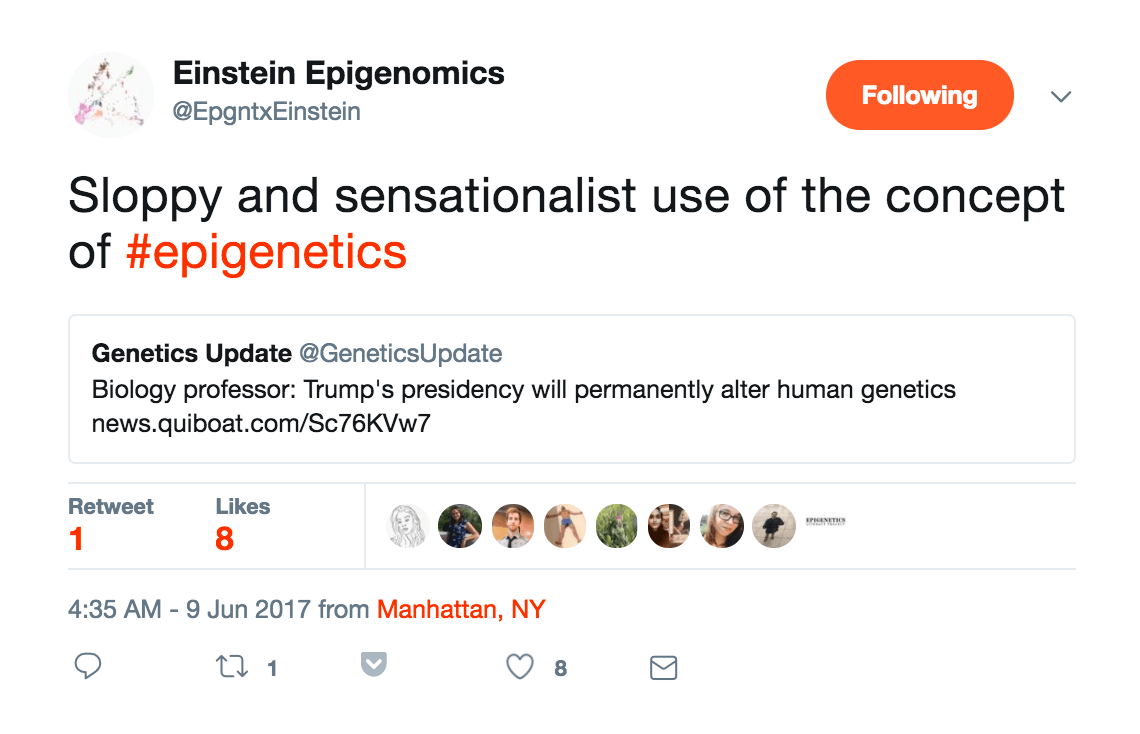 This is the politicization of science that scientists are concerned about. This is what people marched against recently. It’s not a left or right issue — both sides abuse science for their own gain and it needs to stop.

For most of human history, society has considered infertility to be a woman’s issue. But we are starting to learn this is not true. Fertility issues affect both sexes. For the June issue of Men’s Health, journalist Dan Crane wrote a story about this topic and discussed an epigenetics-based fertility test for men. The test, aptly named Seed, looks at genome locations associated with infertility and examines the methylation state of the location. The more methyl markings, the more likely a man will struggle to conceive–or so Episona, the producer, claims. (I wrote about the test when the company first released it in October 2016).

Dan and I spoke about the test (and epigenetics) while he was researching the piece and I’m quoted in the piece.

Nicholas Staropoli, who runs the nonprofit Epigenetics Literacy Project, thinks that even though Episona’s science is good, the data to support actionable conclusions about male fertility may not be there yet. “We still don’t know a lot about how and even if the environment is driving these changes,” he says. But even though more studies are needed, he concedes that the test might have some use. “In vitro fertilization is expensive,” he says, “so a little piece of information to point you toward or away from IVF can be helpful.”

Overall I think Crane did a decent job with the piece. I’m still wary of people using this test before we fully understand why and how these epigenetic markings are added and removed.

But there is one thing that is troubling about the piece, this graph: 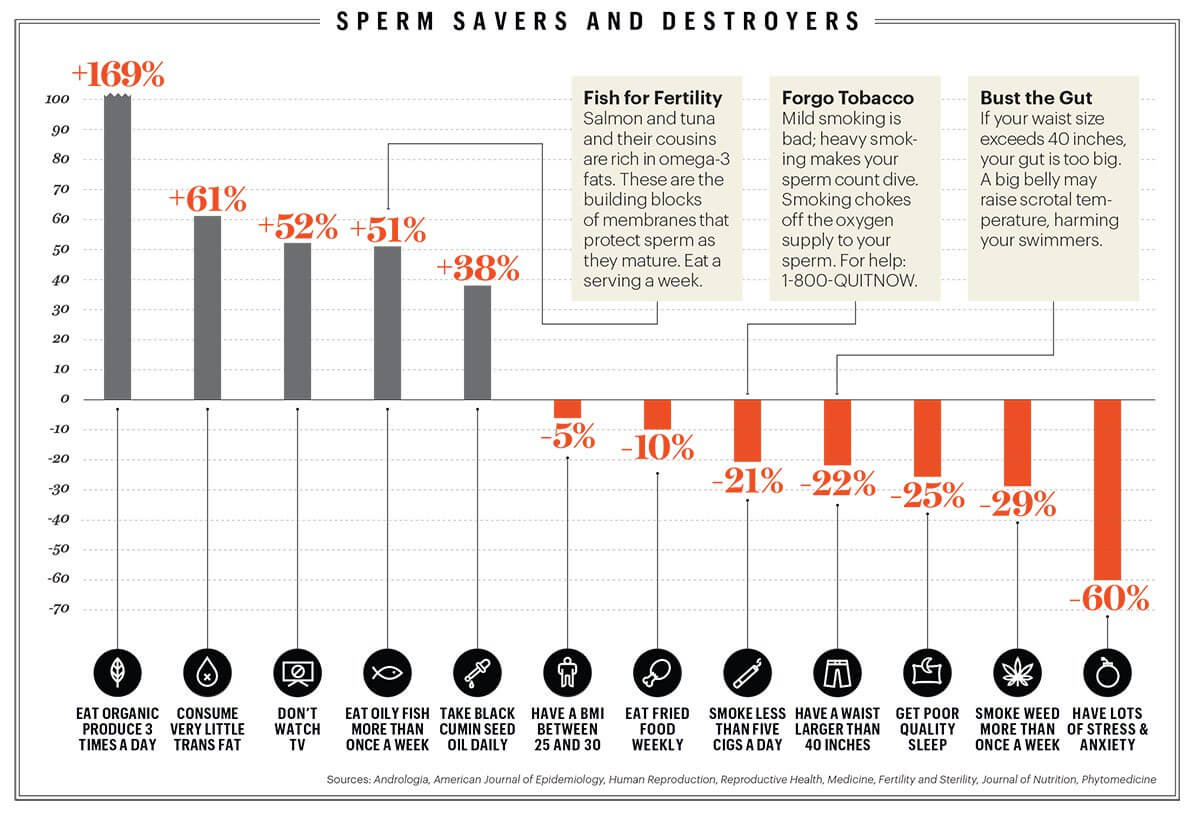 All of this data is based on epidemiological data, which is not scientific fact, but Men’s Health presents it as such. Epidemiological data is an important part of the scientific process as it helps identify a possible relationship between two events. It’s a starter science. A first step. It is not a conclusion.

This kind of data only tells us if there is a correlation. But what actually matters is causation–that one event caused another. Epidemiological data cannot ever describe a biological mechanism to explain how one event caused another. It’s irresponsible to say smoking weed reduces fertility until you actually do an experiment to show how it does or to say organic produce boosts fertility. In this type of study, there is no way to suss out whether the former is caused by say a sedentary lifestyle or the former is caused by a more active lifestyle. Only further scientific inquiry can effectively elucidate these relationships.

If we were to take epidemiological data as fact we’d have to conclude that drownings in the US are caused by Nicholas Cage movies or that eating margarine makes Mainers get divorced–or that organic food caused autism. 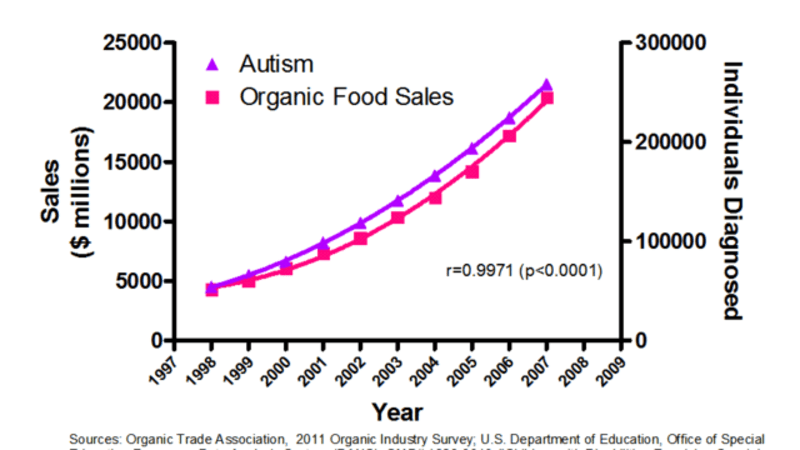 Examining the link between environment, allergies and epigenetic changes in early life

Many allergies start in childhood. According to the European Federation of Allergy and Airway Diseases Patients Association, around 65% of children are affected by 18 months of age. The International Study of Asthma and Allergies in Childhood reports that well over 20% of European youngsters show allergic reactions to inhalants or food at some point during their childhood.

Every day our cells undergo substantial amounts of DNA damage from exogenous and endogenous sources. UV light, in particular, can cause an estimated 100,000 lesions per cell every day. Left unrepaired, these DNA lesions could lead to induction of senescence, cell death or mutations, which could be responsible for the development of cancer, neurodegeneration and several other diseases.

Genetic factors are known to strongly influence conduct problems, explaining between 50 to 80 percent of the differences between children who develop problems and those who do not. However, little is known about how genetic factors interact with environmental influences – especially during fetal development – to increase the risk for later conduct problems.