A University of California Berkeley PhD candidate wrote a widely publicized letter attacking the science documentary Food Evolution in June (signed by more than 40 other academics) at the behest of the very groups exposed in the film, without disclosing her connection, emails released on Muckrock.com show.

[Read Kevin Folta’s response to the campaign by 45 academics and food journalists to discredit the Food Evolution movie.]

These groups (Pesticide Action Network, Center for Food Safety, Small Planet Institute, and Friends of the Earth) all collaborated with Maywa Montenegro on the drafting of this letter and promoting its dissemination afterwards. These organizations share close ties with the organic industry (according to ActivistFacts.com both Patagonia and Ben & Jerry’s) with a vested interest in the continued demonization of biotech crops.

[Read the GLP’s profiles on Pesticide Action Network, Center for Food Safety, and Friends of the Earth.]

The film had been previewed by members of the Pesticide Action Network in preparation for a panel debate, but Maywa Montenegro appeared to not have seen the movie herself.

One Berkeley professor who signed the letter, Miguel Altieri (one of the few to have seen the film), made it clear in an email that his intent was to silence any information that does not fit the anti-GMO narrative.

Maya the question is not more conversations and clarifications about GMOs….. The issue is to take a more radical position like Via Campesina , SOCLA and others of total rejection of the technology….

Another, University Vermont Professor Ernesto Mendez, imagined a 100% independently developed transgenic crop resistant to drought conditions. He insinuated that such a crop should not be developed in case “powerful corporate interests” appropriated the technology.

UC Davis Professor Alison Van Eenennaam appeared at length in the film and was disappointed in the letter. She described it in a blog post as “the actual definition of confirmation bias”.

As academics, shouldn’t you see/analyze something before you offer a detailed critique? I have not yet seen your movie but I offer the following criticisms…..

Molecular Biology Professor Kevin Folta from the University of Florida expressed concern about how the letter makes his academic colleagues look. 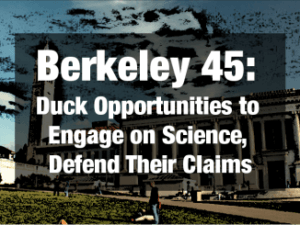 activist groups as the email from the Pesticide Action Network was shared on many of the email listservs they are a part of. None have shared public concern over the incorrect promotion of the letter being authored solely by a Berkeley PhD candidate.

Related article:  Cause for concern over claims of "dangerous" glyphosate in wine, breast milk, cereal, etc.?

They were, however, warned by Carnegie Mellon Professor John Soluri about being “intellectually lazy and strategically silly” for not having evaluated the film by actually watching it. 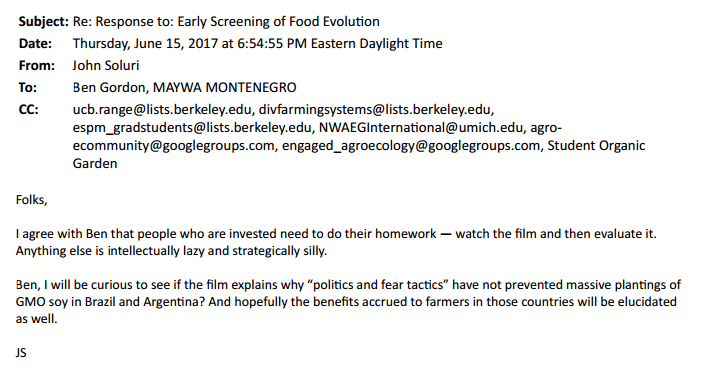 Neither Ms. Montenegro, nor the Pesticide Action Network, have responded to my request for comment.

A version of this article appeared on Medium as “PhD candidate failed to disclose activist connection in letter attacking science film” and has been republished here with permission from the author.