The tantalizing tease in the July 26 MIT Technology Review that human embryos had been edited in the US elicited the usual cries of “genetic enhancement,” “slippery slope” and “designer babies.”

So far the only reports of using CRISPR-Cas9 gene editing on the human germline have come from China, on doomed embryos, so this is indeed a milestone. But the MIT Tech Review report was a bit short on detail, not mentioning the disease-causing mutation from the sperm that had been rather neatly replaced with a healthy version copied from the egg as the two cells met.

A paper published August 2 in Nature fills in the blanks. And Shoukhrat Mitalipov, PhD, from the Center for Embryonic Cell and Gene Therapy at the Oregon Health & Science University, who led the team that includes colleagues there and at the Salk Institute and from Korea and China, didn’t seem too bothered by the initial outcry.

“We use the term ‘correction’ in our paper. I don’t like the word edit, because we didn’t edit or modify anything. All we did was correct a mutant gene using an existing wild-type maternal gene,” he said during a telephone news conference on July 31. 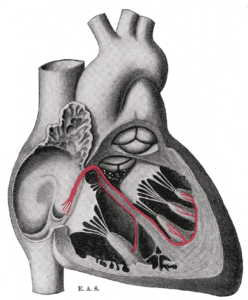 The work taps into a natural way to correct DNA errors called homology-directed repair, to replace a dominant mutation in a gene (MYBPC3) that causes a common form of heart failure, hypertrophic cardiomyopathy (HCM). The heart problem usually begins in middle age, but the condition has claimed young athletes. The gene encodes a protein that keeps the units of heart muscle contraction, the sarcomeres, in line.

Team member Paula Amato, MD, described the experiments: “The goal of the study was to correct a disease-causing gene mutation in viable human embryos using a gene editing tool. We chose MYBPC3 because it is one of the most common causes of HCM. A male research subject heterozygous for the mutation (he had one copy) was recruited for the study along with several healthy young egg donors. A CRISPR-Cas9 construct was designed to target and cut at the site of the mutation. The CRISPR components were introduced at the time of sperm injection.”

Previous work that delivered CRISPR just after fertilization led to mosaic embryos, with some cells corrected and some not. That would be a disaster for pre-implantation genetic diagnosis (PGD), the technology paired with IVF that is commonly used to screen embryos to select healthy ones. There’s something about stepping back to the time right before the egg completes meiosis that avoids the mosaic problem.

Gene correction wouldn’t be an alternative to PGD, but it could be used in conjunction with it, particularly in older women, who make fewer eggs, that are also much more likely to have abnormal numbers of chromosomes, Amato said. Gene correction would up the odds from the 50/50 split of normal to mutant embryos that Mendel’s first law dictates. That would lower medical risk for women, who’d need fewer cycles for success, and lower the cost. IVF/PGD ranges from $15,000 to $25,000 per attempt. 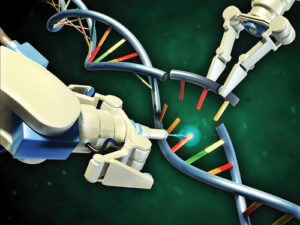 In fact, in the experiments, 42 of 58 CRISPR-injected eggs – 72.4% – led to embryos that bore the correction in every cell. Some embryos cleaved themselves to the blastocyst stage, which is like a fluid-filled soccer ball with a smear of cells – the future embryo – on the inside surface. The fact that the cells could choose their fate – future embryo or supportive structures like the goop that comes out when you give birth – is a thumbs-up for developmental potential.

The glitch is that the other 16 embryos used an alternate DNA repair response (non-homologous end-joining) that triggers “indel” mutations – insertions and deletions that can wreak havoc on a genome — sort of like sentence that has words added and removed seemingly at random. Indels would certainly pluck an IVF embryo out of the running for a future. However, sequencing the genomes of the 42 good embryos revealed none of the feared “off-target effects” that many critics of gene editing cite.

The gene correction so far would only work for people with one mutation that is sufficient to cause disease, such as the mutations behind the BRCA cancers, familial Alzheimer’s disease, and Marfan syndrome. Extending the approach to the autosomal recessive diseases that arise from two mutations would require sending a normal copy of the gene into the meeting and merging cells – and that might need to use damaging chemicals.

Some pretty high hurdles remain before clinical trial planning is even on the horizon. “At this point it’s not clear how we will proceed with the goal of correcting embryos, establishing pregnancies, monitoring births, and following up with the children. That will depend on the regulatory agencies, and they’d have to tell us what they’d require,” Mitalipov said. And it’s quite a morass of mixed signals.

While a report from the National Academy of Sciences from February 2017 hesitantly greenlighted gene editing “for serious conditions under stringent oversight,” the NIH forbids use of federal funds for experimentation on human embryos. Yet the assisted reproductive technology arena is only “lightly regulated.”

Mitalipov would consider conducting the clinical trials in the UK, as he is already doing for mitochondrial transfer, the technique dubbed “3-parent babies” that actually supplies only a very few genes from a third person — the mitochondrial donor. And a renegade researcher is unlikely. “Non-regulated clinics are not equipped or have the expertise to do the gene correcting. The technology is complex and requires a tremendous amount of work,” he said.

The next step is increasing the efficiency from the unexpectedly high 72.4% on beyond 90%. The researchers are confident this optimization is possible. 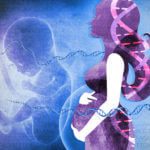 Those of us who recall the backlash against Louise Joy Brown, the first “test tube baby,” who turned out to be the first of more than 5 million and is now a mother, and the vilification on the Today Show of one of the first families to use PGD to select a stem cell donor embryo to save their 6-year-old daughter’s life, can perhaps see past the GATTACA-style panic at genetic manipulation – or even using natural genetic tools – to realize the potential of gene and genome editing.