Is it possible to make a movie about GMOs – commissioned by an organization with ties to the food industry – that’s free of the conflicts-of-interest?

Oscar-nominated director Scott Hamilton Kennedy addressed this issue, and others, in a recent interview with Tim Barker, managing editor of the Genetic Literacy Project, about his new documentary, Food Evolution.

Financing for the film was provided by the nonprofit Institute of Food Technologists, prompting some critics to suggest the work is little more than industry propaganda. The Institute’s membership of more than 17,000 includes academics and professionals who work for companies that include General Mills, Tyson Foods, Coca-Cola and Kraft Heinz. This relationship to what critics call “Big Food,” was pointed out in a letter — signed by 45 academics – that referred to the institute as “an advocacy organization which has long endorsed the biotech industry.”

The film, narrated by Neil deGrasse Tyson, opened in theaters in late June.

This is the second, and final, part of Kennedy’s interview, in which he defends the film’s funding, talks about the GMO debate and its future, and what he might do next.

[The first part of this interview, dealing with criticism of the film, can be found here.]

There’s been a lot of chatter among GMO opponents about the film’s funding. It was funded by the Institute of Food Technologists. Doesn’t that diminish its independence? Is there any substance to allegations that this is Big Ag propaganda?

We demanded final cut. They not only gave us final cut, but understood they had to give us final cut. If they hadn’t given us final cut, they would have had an industrial. And they didn’t want to make an industrial. They wanted to make a film that’s doing exactly what this film is doing. It’s furthering a conversation and being respected and getting quality reviews. The irony is they are food scientists. So not only did they give us final cut, we didn’t even make a movie about them. Our joke was that we were funded by Marvel Comics and we made a movie starring DC Comics. They funded the movie, but we made a movie about AG scientists. That ended up working to our favor in terms of that criticism. We didn’t even make a movie to celebrate their scientists. We made a movie to celebrate science and to defend communication around science.

It’s been alleged by Mike Adams of Natural News that Jon Entine and the Genetic Literacy Project are behind this documentary.

Outside of a single Skype interview that we did – we did about 200 of them for research on the film – Jon Entine had nothing to with this project.

Documentaries dealing with these food issues tend to be categorized as either pro- or anti-. Does that just come with the territory?

There are several layers to it. The documentary industry in the United States has become or has consistently been left leaning. The fact that those liberal values have influenced the documentary community is a bit of a double edge. Many films that are produced as documentaries are very good journalism. But sometimes they also ignore data and sway things toward a liberal bias. I consider myself a liberal. But I consider myself a rational human being way before I put that other title on there. That’s what we get to do as human beings. We have these amazing minds that can try to solve problems and look at things rationally and use evidence and use the scientific method to make decisions. I stand by the film. I stand by my decision to make the film. I ask not just my documentary community but the world considering this film to think about how hard it was to consider: I could be kicked out of my tribe. I’m questioning my tribe. Do I want to do that? It wasn’t a goal. But the goal of trying to tell the nuanced truth was much bigger than the goal of defending my tribe. And in the end, I hope my tribe will be better for it.

What most surprised you in making the film?

One, I can’t believe no one else had made this movie. That goes a little bit to the biases of my wonderful documentary community. As documentarians, we are always looking for a great story. I’m pretty confident there were a few other documentarians who saw this possible angle, but said, “I don’t want to touch that.”

The second one is that confirmation bias is a bitch. I was introduced to that term in the making of this film. As most of your readers will know, it is the disease that makes us only seek out and see evidence that supports our world view. If confirmation bias is a poison, then the remedy is the scientific method.

The third piece is just how far some in the organic and natural foods industry had gone either with their own confirmation bias or were just ruthless marketers in terms of selling fear. And not just how far they went, but what a free ride they got on that fear mongering.

I would never stop anybody from buying organics. Some of the products are delicious and wonderful. Just don’t tell me that its miracle food and if I buy some other food that isn’t organic that I’m a bad, dangerous parent.

Do you think you treated Charles Benbrook fairly in the story? Have you heard anything from him? [Editor’s note: Charles Benbrook is a consultant for the organic industry whose research, once cited by many news organizations as ‘independent’, has been found to be funded by GMO critics. Read the GLP’s profile of him here.] 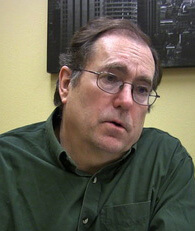 I got one email from him saying “send him the film.” I wanted him to see it with an audience. So, we are waiting on that. I feel completely fine with the way I treated everybody in this film. Is it perfect? Of course not. Charles Benbrook presented himself as a huge expert in GMOs, especially in terms of interpreting glyphosate. Looking at the work that he has done, I have no problem with the way he was represented in the film, both negatively and positively. I don’t have a problem if the organic industry funds scientific studies. I don’t have a problem with Monsanto funding studies. The problem is if results are asked to be promised – and are promised. That’s not science. If an industry wants to take a chance on the scientists doing a study and they are willing to take the results of that study, good, bad or otherwise, that’s science. Chuck Benbrook had worse than a conflict of interest. He promised results. We pointed out his failings because he promised results and manipulated the truth.

Is there another film to be made? Addressing the question whether ‘intensive’ or ‘industrial’ agriculture is an ecologically smart model for our planet going forward?

Not currently. But you never know. I’m open to it. There are some offshoots that I’m considering. Resetting the conversation on vaccines is very similar to this. Taking on the obesity epidemic with the same discipline and complexity. We all can see from the data how daunting obesity is. What I’m not seeing yet is getting to the real nuance and complexity of why this has happened.

We are now well into the next wave of biotechnology with the advent of CRISPR. You didn’t address this in the documentary, but you obviously have a feel for the public sentiment around agriculture and technology. In light of your experience in researching and filming this documentary, do you think gene editing will alter the dynamics of the debate?

Does CRISPR stand to be misinterpreted and made into being a scary technology and that might limit the positive uses of it? I think there is a good chance of it. I might be a rose-colored glasses optimist, but I believe the scientific method will, more often than not, win out. Clearly, we’ve seen some technology crushed because of fear, but, more often than not, the good technology comes through. Because people see the benefits and they embrace those benefits and we move on down the road.

I don’t want to toot our own horn, but we would be so honored if the film started a food, environmental movement 2.0. I hope it will further the conversation and people don’t have to say at cocktail parties – “GMOs suck and organic is amazing.” Let’s make sure that we are not making decisions that are not only not based on good science, but that also go counter to our goals. If I’m buying organic food because I think it’s better for the world and will save my children, A) there’s not science to support that and B), you might actually be doing damage to someone in Africa who can use the technology to feed their family. Just look at the big picture.