But technological advancements combined with a rising demand from doctors and parents who see it as a potential solution to infertility are slowly forcing the procedure into the conversation about the types of genetic tinkering that should be allowed in humans — and for what reasons it is justified.

Until now, the procedure largely has been touted as a way for parents to avoid passing a potentially fatal mitochondrial disease to a child. That’s accomplished by exchanging the mother’s mitochondrial DNA with that of a healthy donor — the “third parent.”

Among those pushing for the freedom to use the procedure is New York-based embryologist John Zhang, who has skirted the lines of legality in the past, creating embryos at his New York City facility and implanting them at his fertility clinic in Guadalajara, Mexico. His first successful procedure — treating a couple with a severe genetic anomaly — was widely publicized in late 2016.

He took things a step further earlier this year, when he started promoting the technique for older women who wanted to conceive — even if they carried no dangerous genetic mutations. That ended on Aug. 4, when the FDA told him to stop. From Gizmodo:

The FDA said that after a request to conduct a clinical investigation of the technique was denied, Zhang had told regulators he would not perform the technique again without permission. Still, the agency wrote, he continued to promote it on the company website, his personal blog and elsewhere. Creating embryos intended for human research is against regulations, the FDA wrote, as is exporting those embryos.

Zhang has since taken down the website for Darwin Life — his international three-person IVF company — and says he will comply with the FDA’s guidelines. The US currently bans creating a genetically modified embryo for uses outside research, including the making of kids. There has, however, been a pushback from scientists. In In February of 2016, an advisory panel urged the FDA to begin considering clinical trials of the technique — using only male embryos.

From Sara Reardon at Nature:

The US Food and Drug Administration (FDA) should approve clinical trials of a gene-therapy technique to create embryos with genetic material from three people, the US National Academies of Sciences, Engineering and Medicine said on 3 February. The goal would be to prevent mothers from passing down disabling or fatal genetic disorders. 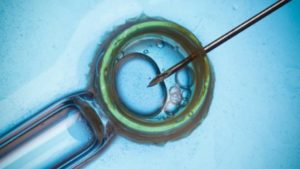 But because existing laws against genetically modified embryos still stand, the FDA said it was forced to refuse Zhang’s requests to begin clinical trials. Additionally, there is a big difference between using the technique for couples with known mitochondrial disease and the blanket marketing used by Zhang aimed at thousands of women over the age of 40 with no diagnosis of specific genetic disease.

The procedure (Zhang gives a pretty good video overview here) uses a donor egg, a maternal egg and a sperm. The nucleus of the donor’s egg is removed, leaving the egg empty of genetic material except the mitochondria. Those parts of the cell contain their own mini-genomes with 37 genes. They’re inherited from mother to progeny. And they can carry significant and fatal diseases. Once the donor’s egg is prepared, the nucleus of the mother’s egg now fertilized by dad’s sperm, is injected. In some variants of the procedure, they transfer the mother’s nuclear DNA and then fertilize the newly created egg.

Mitochondria’s DNA affects energy metabolism and muscle tone. It’s not what we think of as the genetic material that makes us who we are. But the procedure is still highly controversial. And only a few birth’s have been successful — with no data on the offspring’s long-term health. Mitochondrial diseases are severe to fatal and there is no alternative for couples who carry the disease. But marketing the procedure to the tens of thousands of women with age-related infertility seems wildly irresponsible. We don’t even know the mechanisms responsible. From Emily Mullin at Technology Review:

The cause of age-related infertility is still unknown, but Zhang and some other experts believe that faulty mitochondria are a reason why older women can’t easily produce viable embryos. That’s why Zhang thinks his technique of harnessing a young egg will help.

There are a lot of data that show links between deteriorating mitochondria and aging throughout the cells of the body. Much of it is centered around the idea that as we age, our mitochondria are less efficient at making and using energy which causes slowing of our metabolisms. The data linking mitochondria deterioration in egg cells to infertility is slimmer. Furthermore, the studies done so far are mostly confined to mice and rats. It would be a stretch to say old mitochondria are responsible for age-related fertility in women, in any case. And an even further stretch to tell couples your technique will get them pregnant as long as you have $100,000 to pay for it.

The FDA is currently reviewing the National Academy’s advisory board recommendation to begin trials of 3-person IVF for mitochondrial disease. It should approve high-quality trials because they are necessary for a safety assessment. The agency was right to put the brakes on Zhang’s marketing to couples without mitochondrial disease. But the procedure isn’t going anywhere. Zhang’s business model proves there are providers willing to perform the experimental procedure and couples of means willing to pay for it. We need data to make sure we know how to use it safely and appropriately.