Ugandan journalist: How do you report on crop biotechnology when critics spread misinformation?

Whether its’ the result of global warming or the vagaries of a complex climate, Uganda is facing a scorching reality that is killing crops and animals. Billions of shillings that could have been used in other projects is set aside for food aid to affected communities. Every leader, from the ruling president to the Farmers’ Federation President, is advising subsistence farmers to grow their most drought tolerant corn crops. But there are not easy solutions.

And that’s where genetic engineering enters the picture.

The organization Water Efficient Maize for Africa (WEMA) has developed drought tolerant varieties through conventional breeding. This drought tolerant maize however needs to be protected from pests and diseases which tend to attack more in harsh conditions, particularly the maize stalk borers. The stalk borers can cause up to 100% yield loss and expose the grain to fungal growth that results in aflatoxin contamination.

Journalists are key in creating awareness among farmers to adopt the new technology. However, conventional journalistic reporting requires them to “balance news”–and much of what is being said about he new technology comes from anti-GMO activists spreading misinformation about their alleged dangers. 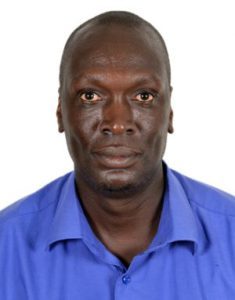 How can journalists balance news without appearing to be reporting misleading “alternative facts” that have no evidence. I interviewed  Christopher Bendana, one of the leading science reporters in Uganda, about this challenge:

Bendana is a science feature writer with Uganda’s leading Media, New Vision. He has reported on science issues for over 8 years and extensively on biotechnology in Uganda and Africa in general. Journalists like Christopher who independently report on biotechnology are characterized by anti GMO activists as “bought.”

What is your perspective of “balancing” when it comes to science reporting?

Like any balancing of news, you must avoid false information. When quoting, cite the profession  of the speaker if not scientist.

How do you ensure when you introduce balance into your stories, that you are not presenting  “alternative facts” that may not be backed with valid evidence?

More important than balancing is use of the inclusion multiple sources from different credible institutions. Sometimes there is no need for balance when facts are there for everybody to see.

Doesn’t it challenge the traditional way of reporting where news must be balanced–where you have to present both sides as if they carry equal weight? For example, how do you report when a renowned person says GMO causes cancer?

You put it in context using facts, and writer it fairly. You might add, for example, that the World Health Organization a recognized global health body, says GMOs do not cause cancer, or cite the National Academy of Sciences in the US.

You and other science journalists have been accused of being compromised, for being shills to Big Ad. Does that bother you?

No, deep inside my heart I believe it (genetic engineering) is good science. My conscience is clear otherwise I would have left reporting.

Have you ever felt any conflict between reporting science and journalistic values of reporting a balanced story?

Can a journalist who thinks GMO is bad report objectively?

No, human beings are subjective.

Does that imply you too may not be objective?

You promote what you believe in.

What motivated you to go into science writing?

Many of the world’s problems are solved through science. Diseases, famine, transport and communication challenges all have science based solutions. My main motivation is to highlight solutions to global challenges and Biotechnology is one of those.

According to the Chairman of Uganda’s Science Journalists association which is a member of the World Federation of Science Journalists, William Odinga, science bases a lot more on facts and those facts are clear. He believes that in science reporting, presenting the opposite view may not be necessary when there is no evidence to back it up. He acknowledges that balancing is mostly applicable when there is an allegation about someone or on an institution under question, and where the other side should be given the opportunity to respond before the story is published. He emphasizes the need for science reporters to be knowledgeable about the subject to avoid promoting people’s opinions when they are not based on facts.

Consumers of all science based technologies and innovation often interact with science at the final product level. This is true for pharmaceuticals, engineering, electrical, agricultural among others. It has not been so with agricultural biotechnology where some “concerned” groups demand that every process has to be explained to farmers and consumers. Most people are not in touch with the “boring” details of science and always find it hard to absorb the information, especially on security issues involving both health and food.

In Uganda, communicators under their umbrella of the Government Communicators Forum have been brought on  board by the council of science to learn more about Biotechnology. The challenge will always be how best to balance the scientists obsession with facts with how human beings consume and use information. Initially only journalists were involved in communicating science through the news media outlets. These journalists get to visit the field trials and update the masses.

Last January, they visited a water efficient maize trial to get updates on the research progress. They learnt that despite tolerance to drought, maize lines which did not carry insect resistance GMO Bt trait were seriously destroyed by stalkborers. The journalist later spoke to the local and national leaders who were pleased with the protection Bt trait was conferring to their maize. The community leaders where the Maize CFT is all agreed that both drought tolerance and insect resistance are key to ensuring household food security