Male fertility likely declining, but we haven’t figured out why

The possibility that male sperm counts have been declining in advanced countries has been a focus of concern for several decades.  The scientific community is divided as to whether there is a universal decline and, if so, what the likely causes are.

As an epidemiologist with an interest in the influence of lifestyle behaviors and environmental exposures on human health, I have followed the debate on sperm counts and male fertility.  When the largest and most comprehensive study on this question was published this past July, I wrote about it, attempting to put the results of the new analysis in context.  The study was a “systematic review” of studies examining sperm count and sperm concentration from 50 different countries between 1973 and 2010. In this large synthesis of previous studies, sperm concentrations in the ejaculate of men in Western countries had declined by 52 percent over the nearly 40-year period. The analysis was carefully done, and the authors attempted to address a number of pitfalls.

I emphasized the problems inherent in using results from studies conducted in different populations during different time periods and using different methods. I also referred to a careful study of sperm count in young Danish men over a period of 15 years (1996-2010), which showed no change in sperm count. I pointed out that opinion among scientists was divided regarding a previous meta-analysis published in 1992, which also appeared to show a dramatic decline in sperm count. Finally, I discussed possible causes that might account for a decline, if, in fact, it were real. 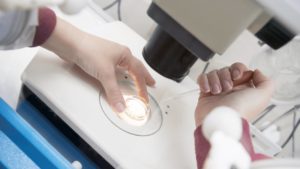 In order to make sure I was not overlooking important considerations on a difficult topic, I wrote to Professor Richard M. Sharpe of the University of Edinburgh, one of the foremost experts on male reproductive development and pathology. Professor Sharpe wrote back saying that he felt my piece was “accurate, fair, and balanced,” although he would “put a different spin on a couple of things” I mentioned.

First, he pointed out that the median sperm count across all years of the study of young Danish men was in the low 40’s x million/ml, which is at or below the 47.1 million value reported in the new systematic review for men in 2011. He added that “There is very good data historically for Danes showing much higher sperm counts [i.e., in the past – G.K.], plus they have the highest assisted reproduction rates in the world. I would agree that the Danish 15-year data (highly reliable and well-standardized) do not support the idea of a continuing fall in sperm counts, as implied by Levine et al., but they do not offer any support for ‘no fall.’ ”

Second, Professor Sharpe wrote, “I personally share your opinion on the evidence (or rather lack of) that endocrine disrupting environmental chemicals are an important factor in the apparent sperm count fall.” However, he questioned my argument that people in developing countries have higher exposures to chemicals in the environment, arguing that some exposures will be much higher than ours, but others will be much lower. “We would need to know which are most important in the present context before drawing any conclusions (and we clearly do not know which, if any, are important).” A valid point.

Finally, Professor Sharpe commented that the idea of conducting a prospective study to address the question of declining sperm count is unrealistic, given that such a study would require very large numbers and a span of 25 years or more. Furthermore, such a study would fail to answer the question whether sperm counts have fallen up until recently; it could only address whether they are continuing to fall. And this question appears to have been answered in the negative by the Danish study of young men over a 15-year period.

In closing, Professor Sharpe wrote, “Ultimately, the arguments can go back and forth and no amount of new data is likely to resolve the issue of a historical decline. So maintaining a balanced view (i.e., there is always uncertainty) is, in my opinion, all that the evidence allows.”

First, there is good evidence from the study of young men in Denmark that there has been a shift toward lower sperm counts in the period 1996 to 2010 compared to the 1940s. Recent studies in European and North American populations indicate that 20-30 percent of young men today have sperm concentrations below 40 x million/ml, which is associated with a reduced fertility, i.e., the ability to father a child.

Second, sperm number and quality are influenced both by exposures in utero and soon after birth and also by exposures later in life. For example, we know that maternal smoking during pregnancy can reduce testis size and sperm count in males. Other maternal behaviors and perhaps particularly medications taken during pregnancy may also have important effects. (In an earlier exchange, Sharpe told me that he had turned his attention to this neglected question). As for environmental pollutants, studies in animals show that exposure to chemicals at high levels can adversely affect sperm count, but these high exposures are not relevant to the general human population. A host of exposures associated with modern, urban lifestyle may potentially have adverse effects on sperm count and quality both in the perinatal period and in adulthood. These include sedentary lifestyle, obesity, stress, poor sleep, smoking, and nutrition. Because many of these exposures are correlated, identifying the key factors represents a daunting challenge.

A final point is that, as Richard Sharpe makes clear, in view of the difficulties of identifying trends in human reproductive function and possible causes, we need to resist embracing facile explanations that appeal to the public, journalists, and to scientists with an investment in a particular hypothesis, such as the endocrine-disruption hypothesis. Sharpe uses his extensive knowledge to describe what the firmest evidence suggests, but, at the same time, he is careful to delineate the limits of our knowledge. His skepticism regarding endocrine disruption as an explanation for the dip in male fertility is particularly noteworthy, since in the early 1990’s he was one of the first to formulate the hypothesis.

Geoffrey Kabat is a cancer epidemiologist at the Albert Einstein College of Medicine and is the author of Getting Risk Right: Understanding the Science of Elusive Health Risks. Twitter @GeoKabat.

Part of this article was originally published at Forbes as “There Are Signs Of A Troubling Decline In Male Fertility, But The Causes Are Unclear” and has been republished here with changes with permission from the author.