Why are thousands of bumblebees dying around the fragrant Linden trees of London?

Visitors in the Kew Royal Botanic Gardens near London have reported hundreds, if not thousands of bees, especially bumblebees, sick or dead, beneath fragrant, flowering Tilia [a form of Linden] trees. Similar reports have been made in other parts of Britain and Europe, as well as the United States — as long ago as the 16th century. 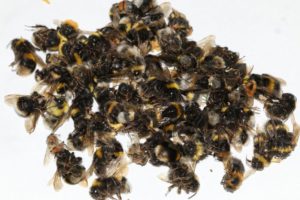 This case isn’t closed, but here’s what the researchers believe following their review: The bumblebees end up relying too much on the Tilia as a food source because they form strong associations with its odor, color or flower shape. It’s even possible that nicotine or caffeine, which some evidence suggests is in linden nectar, enhances these associations (as it has for honeybees with citrus and coffee plants). More experimentation is required, but the bees may continue visiting Tilia, perhaps instead of other flowers, even when there’s nothing left to eat.

“It takes them too long to realize that’s not a good source of nectar before they drop to the ground,” [said Philip Stevenson, a chemical ecologist at the Kew Royal Botanic Gardens and the University of Greenwich in the United Kingdom].

The GLP aggregated and excerpted this article to reflect the diversity of news, opinion and analysis. Read full, original post: The Mystery of the Dead Bumblebees and the Linden Trees