Comparative mammalian neuroscience, paleobiology, the discovery of thousands of planets around other stars in our corner of our galaxy, and the famous Drake Equation all suggest that we are not alone. Within our own galaxy, there should be thousands, if not millions, of civilizations capable of communication and travel between the stars. Occasionally, scientists detect radio signals from across space whose patterns could suggest intelligent origin. Also, in recent years, astronomers have been observing strange dimmings of a certain star that could represent some kind of massive engineering project, but none of these phenomena have a confirmed technological origin. Eyebrow-raising signals picked up by researchers of the Search for Extraterrestrial Intelligence (SETI) Institute have not appeared with the repeatability that science demands, nor have all possible natural phenomenon been exhausted that might explain the unusual star.

To state it plainly, there is not a shred of evidence that any thinking, technological beings share the Cosmos with us. Yet this lack of evidence conflicts with the fact that our science tells us that someone else must be out there. The contradiction is known as the Fermi Paradox, named for Enrico Fermi, the 20th century nuclear physicist, who noted the contradiction in 1950. That was eleven years before astronomer Frank Drake developed his famous formula for estimating the number of technological communicative civilizations, and decades before the first detection of a planet around another star.

Since Drake initiated what would become SETI back in the 1960s, ET skeptics have typically depended on the Fermi Paradox to frustrate SETI optimists. That hasn’t stopped SETI scientists from looking for evidence of ET communication or other technology that might leak across interstellar space. And now artificial intelligence (AI) technology, and to some extent neuroscience, has added a new dimension to the discussions. What if technology were to become so advanced that it no longer sends out waves or particles across space, or even so advanced that it cannot be recognized, or distinguished from the natural world? 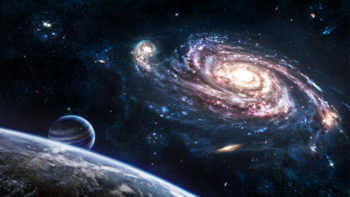 Arizona State University (ASU) is home to the Beyond Center, directed by astrophysicist Paul Davies who noted recently that extremely advanced technology might not even be made of matter. “Five hundred years ago,” Davies wrote, “the very concept of a device manipulating information, or software, would have been incomprehensible.”

Now, it’s true that some people of the Renaissance period –Leonardo da Vinci, for instance– might delight in a piece of 21st century hardware, realizing that it’s a sophisticated machine. But Davies’ point is that our technology operates on a higher level than that of a machine from five centuries ago. Once familiar with a 21st century helicopter, da Vinci (who actually imagined and drew a helicopter-like flying machine) wouldn’t know what made the craft’s engine turn, nor about the radio signals from satellites in space keeping the craft on course, but he could quickly learn to recognize that the helicopter is approaching by it’s characteristic noises.

But Davies points out that an extraterrestrial technology more advanced than ours could be many levels beyond our own. Consider that da Vinci would understand the mechanical aspects of the vehicle — the rotor blades turning similar to a wheel turning — but that he wouldn’t see the engine whose tiny valves and special materials constitute a level of technology much higher than the steam engine that was still centuries ahead of da Vinci. The computers and other electronics inside the vehicle represent still a higher level. Imagine then adding another five hundred years of technological advancement.

But now consider a civilization that has been around for thousands, tens of thousands, or even hundreds of thousands years. Comparing their technology to ours would be like comparing our technology to that of Stone Age humans, who in all likelihood would see us as gods. Unlike da Vinci noticing the rotor blades turning and appreciating the power of the resulting wind, Stone Age people would notice only that the vehicle flies and would be frightened by the noise.

Now, project our technology forward by a million years, or dare I say a billion? If we continue to advance technologically,there will be newer and newer levels of technology. Considering how our communication devices are getting smaller and the predictions that they could eventually be implanted. It’s not unreasonable to suggest that we would appear as magicians or gods even to the people from 200 years ago, when scientists were starting to recognize electromagnetism.

Whereas the Drake Equation predicts that millions of ET civilizations should have emerged just within our own galaxy, the possibility of having such a civilization nearby depend on the most uncertain factor of all — what Drake calls L, the longevity factor. We simply have no idea how long the typical technological civilization should endure. Will we last just another few decades and then destroy ourselves? Will we go on for millions of years, getting increasingly advanced?  Or will it be something in between? Maybe we’ll lose our technology and go into a dark age, then start over. The bottom line though is that the chances of encountering another civilization depend on the L factor. This means that we can call a neighboring civilization “a little bit ahead of us” technologically, if they are ahead of us by, say 10,000 years.

From that perspective, Davies thinks that we must consider levels of technology that don’t even involve matter. Given the rate that our technology is advancing, we could be talking about mere centuries, or at most millennia to reach such a point ourselves, in which case the window for recognizing extraterrestrial intelligence by the radio waves, optical waves, or anything else that it puts out or leaves behind could be incredibly narrow — if we take a cosmic perspective on time.

And that could be the answer to the Fermi paradox.