Jon Entine | December 5, 2017
This article or excerpt is included in the GLP’s daily curated selection of ideologically diverse news, opinion and analysis of biotechnology innovation.

If you love Atlantic salmon, what you are eating is almost certainly farm-raised, despite what the label might say. The mislabeling fraud may be as high as 69%, according to a Time survey.

Many consumers believe they are ‘missing out’ in taste by not consuming wild fish, but more and more salmon lovers accept the fact that we need to buy farm fish to restore the ocean’s bounty because of a history of overfishing. They are focused on the benefits of sustainable fishing and the healthy advantages of salmon—it’s a great source of heart-healthy omega-3 fatty acids. Las Vegas chef Rick Moonen, a champion of sustainability, is one of many high-profile chefs who have switched to farmed salmon.

Which makes the current campaign by some Canadian environmentalists attempting to demonize what is widely considered the most sustainable salmon on the market—a fish genetically tweaked to grow twice as fast with no negative ecological consequences—particularly disturbing. It’s also highlighting the ongoing pitched battle between organic fundamentalists, who proliferate in the old-line environmental movement, and more science-and technology-embracing environmentalists.

Atlantic salmon reproduce in the coastal rivers of northeastern North America, then migrate along the Canadian coast and as far north as Greenland. But with only a few thousand fish returning to the rivers of Maine and the Canadian Atlantic provinces every year, these populations are near extinction.

There are a number of sustainable responses to the ongoing crisis. You can add salmon to the rivers. Two months ago, members of the Fundy Salmon Recovery project in New Brunswick began releasing what would end up being 1000 fish. Of the 800 salmon released into the wild the previous year, 16 returned.

“That might not sound like a large number, but 16 fish would total more than multiple years put together on most Inner Bay of Fundy rivers,” said Fundy National Park ecologist Corey Clarke.

Atlantic salmon farms have proliferated, often in the Pacific Northwest or in cages off Norway, Scotland and Chile. Some have been mired in scandal because of poor farming conditions, threats of disease or lax controls.

Much of our salmon is imported from other countries where sustainability regulations are lower. Between 2009-2016, the US imported more than 857,000 metric tons of salmon, most of it of the Atlantic species, brought in by massive planes and often with a high carbon footprint.

Now there is a new solution, that’s both sustainable and safe. And it has anti-biotechnology activists in a dither.

AquaBounty, which has its fish farm in Panama, sold 5 tons of genetically modified salmon into the Canadian food market in a matter of days in June this year. At present, only its limited capacity is holding back sales, but new production facilities are in the pipeline for 2018.

Although the salmon made it through labyrinthal regulatory systems in the US and Canada, it’s not yet sold in the US because it is in a political vise wielded by Senator Lisa Murkowski. She knocked the FDA for approving the fast-growing fish two years ago.

Demonstrating her science bonafides and non-ideological view of the first approved GM fish for sale, Murkowski calls the salmon a “Frankenfish.” She is blocking the final greenlight, demanding the US government issue labeling guidelines before allowing AquaBounty’s salmon into commerce. The Alaska Republican wants to protect sales of Pacific salmon, although experts say the farmed Atlantic and wild harvest Pacific salmon species don’t compete on American plates.

The AquAdvantage Salmon offers a range of sustainability and economic benefits. The GM salmon contains the growth-hormone gene from a Chinook salmon, the largest Pacific salmon species, and a “promoter” sequence of DNA from an antifreeze protein gene from an Ocean Pout. The promoter is the “on switch” that keeps the fish’s cells making growth hormone year-round.

Constant hormone release allows it to grow more quickly—16 to 18 months — half the time as compared to conventional farmed salmon in the ocean, which grows in spurts in the spring and summer months, reaching market sizes in 31 to 36 months.

Salmon farming in general is very efficient in developing economically sustainable food in competition with beef, pork and chicken. But, AquaBounty’s version, because it consumes less feed, is off the charts, based on data reviewed by the FDA.

It was developed using a land-based closed-containment system that recycles >99% of the production water and enables optimal production without antibiotics or other chemicals to control disease and parasites.

The carbon-release environmental costs of transporting the two major fish-farmed sources of US Atlantic salmon will be cut by as much as 25 times because the salmon can be farmed close to major consumer markets and won’t have to be flown in. 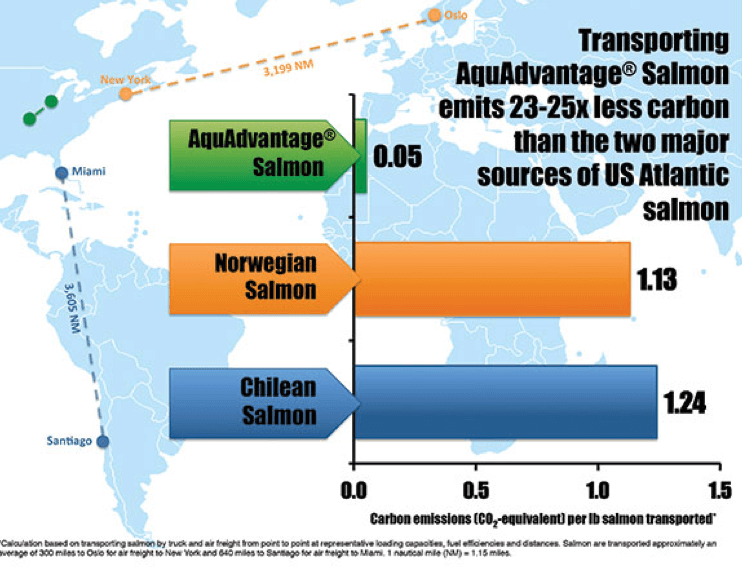 ‘Informed choices about what consumers eat’

As the fish winded through the approval process in Canada and the US, anti-GMO lobby groups launched vicious attacks. Food and Water Watch claimed the salmon contains higher levels of a hormone that could cause cancer and has higher allergic potency. Additionally, it detailed its concerns about animal health and the environment, claiming the salmon might escape and impact biodiversity. The US and Canadian government environmental assessments dismiss such claims as exaggerated or outright wrong.

Friends of the Earth has had a long-running campaign to intimidate retailers from offering the salmon for sale, starting as far back as 2013:

The goal is to make sure there is not an available market for genetically engineered seafood. People don’t want it, and markets are going to follow what people want.

To ensure that they inform consumers about what they should want, FoE has recently teamed with the Canadian Biotechnology Action Network in threatening major Canadian retailers unless they refuse to offer the salmon, and demanding a link to a website statement acquiescing to the demand.

“Click here to see if your grocery store has rejected GM salmon,” CBAN writes. Its website is a collection of scientific misinformation and exaggerated concerns reviewed and rejected over almost two decades of assessments by independent government agencies in two countries. Here is a copy of the demand letter. 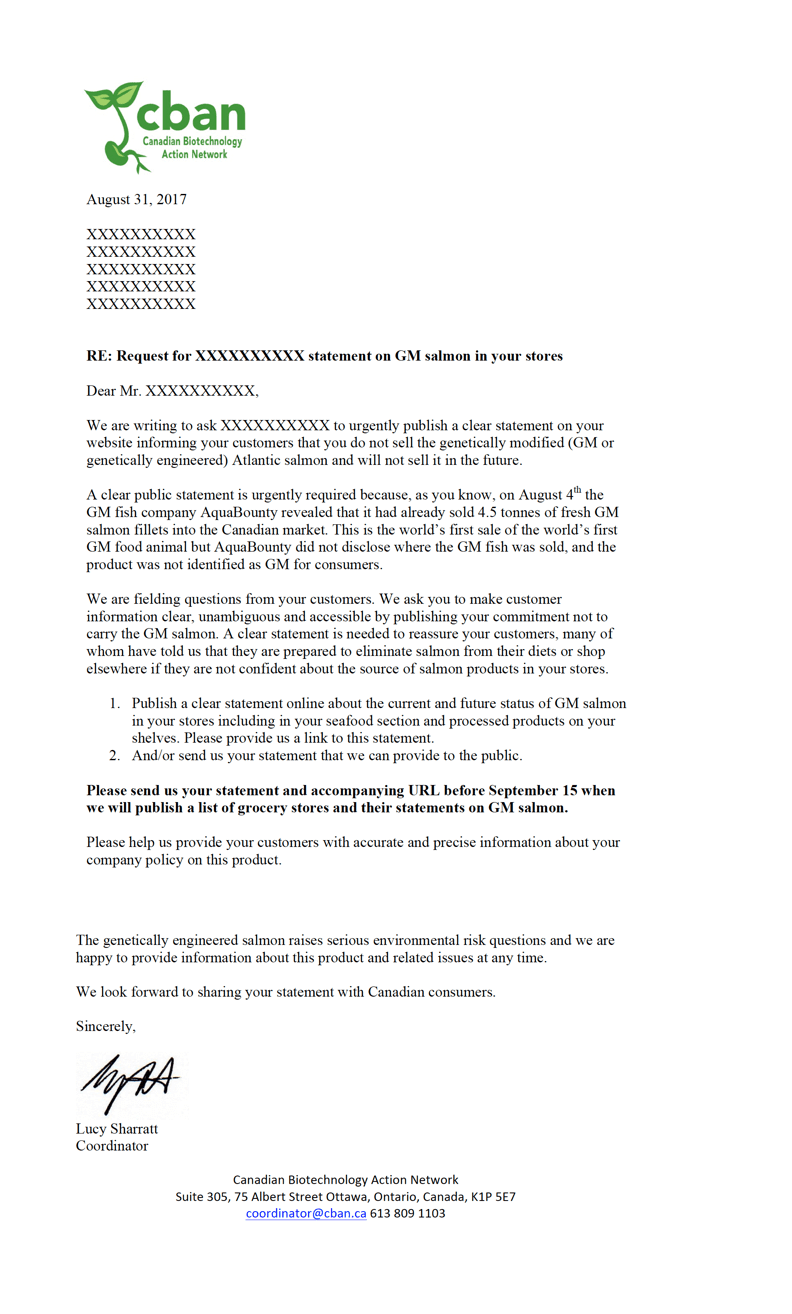 CBAN is now separately demanding that all retailers commit to never carrying GM salmon regardless of the proven sustainability benefits. They have organized an international campaign targeting IGA, Costco, Loblaw, Metro and other chains, with the goal of preventing customers in Canada, and eventually the US access to the fish—and killing momentum for global sales. They claim their goal in preventing sales is so consumers can have “informed choices about what they eat.”

The letter finishes with: “Please help us provide your customers with accurate and precise information about your company policy on this product.”

There is a very real threat here: do as we demand by this date or we will publicly shame you online and on social media until you comply with our demands.

Contrary to what the anti-biotech/pro-organic NGOs stated in their press releases, the top food retailers across Canada and the U.S. did not make public statements of their own free will that they have no plans to sell the genetically engineered salmon. Rather, the retailers made a pragmatic business decision to get the NGOs off their backs so that they did not have to deal with the media and public relations issues that would surely follow if they chose to ignore the activist demands, or even pushed back at them.

For example, after an aggressive letter-writing campaign organized by advocacy groups in 2015, COSTCO publicly adopted a policy posted on its website declaring it “does not intend to sell genetically modified salmon.” Now even that is not enough for CBAN, FoE and other fringe groups. “Even if they do not sell GM salmon to date, this could change in the future without a clear policy on it,” CBAN writes in a mass email to it supporters.

The intimidation tactics used by CBAN and FoE work, history shows this time and time again, which is why they use it.  Grocers just want to sell groceries and keep customers coming back to their stores.  Anything that disrupts this routine is a threat, and can be painlessly dealt with by throwing a financially inconsequential new product under the bus.

What are the real motivations of CBAN and other anti-biotech advocacy groups?

Both CBAN and FoE have been waging campaigns against biotechnology for many years in the guise that they are speaking for consumers.  Nothing could be further from the truth.  Both NGOs are pro-organic foods and promote the benefits and values of that sector on their websites and in their communications and activism campaigns.  If you visit the CBAN website, you can clearly see that they are pro-organic by examining the composition of their members and steering committee.

Similarly, on the FoE website there is a strong statement of support for organic farming. So, when they say that they are speaking for Canadian or American consumers, they are really only speaking for themselves and using “consumer concerns” as a cover to push an agenda.

What consumers are not aware of is that the campaign against AquaBounty specifically and biotechnology generally have nothing to do with food safety, nutrition and transparency, and everything to do with the economics of market shares. Long ago, the organic foods industry realized that to attract customers willing to pay more for their products they had to demarket (or ‘delist’, in grocer terms) the products of their competition, that is, conventional food products and those derived from biotechnology.

Consumers are pawns in a battle for market share being waged by organic food interests and ideological NGOs. AquaBounty is a lightning rod for the attacks by CBAN and FoE because, if AquAdvantage Salmon reaches consumers and they enjoy eating it, the organic movement could suffer a landmark setback—a successful GMO brought to market by a small independent company that brings measurable benefits, economic and environmental, to a large number of people.

It is ironic that CBAN is always clamoring for transparency from government and the biotech sector, but have hidden from consumers the real agenda they are pursuing—to remove all precision bred plant and animal products from grocery stores. Genetically modified products threaten the growth of the organic foods sector because they can be grown using fewer resources in a more environmentally sustainable way. They also cost less than the high-priced organic food products that use more resources and are less environmentally responsible to produce.

Jon Entine, executive director of the Genetic Literacy Project, has been a journalist for more than 40 years, as a writer, network television news producer and author of seven books—four on genetics and risk. BIO. Follow him on Twitter @JonEntine.