Viewpoint: If your interest is sustainability, organic and GMO labels won’t inform you

During a panel discussion I was once asked, if I could change one thing about agriculture in Canada what would it be? My answer, I would remove labels. I would get rid of the arbitrary distinction that separates “organic” from “conventional” so we can instead focus on the bottom line: sustainability.

Because ultimately that’s why I do what I do. I’ve been an environmentalist for as long as I can remember. From saving the ozone layer to protecting the rainforests, I’ve been passionate about reducing our carbon footprint and protecting the environment since I was a small child. Which is, in part, how I ended up as a geneticist.

I could write a whole book on why I am excited about the role genetics can play in saving the environment. And it’s part of why I really hate labels. Let’s look at what could go on an organic label, for example. According to the USDA, “Organic is a labeling term for food or other agricultural products that have been produced using cultural, biological, and mechanical practices that support the cycling of on-farm resources, promote ecological  balance, and conserve biodiversity in accordance with the USDA organic regulations.” 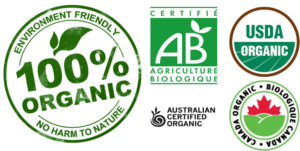 Promote ecological balance and conserve biodiversity? Where do I sign?! The problem comes at the end of that sentence; “in accordance with USDA organic regulations”.

USDA organic regulations go on to describe organic standards plus the List of Allowed and Prohibited Substances – they are mostly natural, but with dozens of exemptions for synthetic versions. It explicitly excludes the use of so-called “genetically modified organisms”.  For a scientist, that is a big issue. The List is entirely founded on a logical fallacy (Appeal to Nature); exempts synthetic stuff they really like even if it’s not organic; creates a false dichotomy that leaves people with the misperception that there are only two choices; and ignores a full spectrum of choices that lie between two apparent extremes (organic versus conventional).

We scientists are trying to promote ecological balance and conserve biodiversity while feeding a growing population projected to reach 9.7 billion people by 2050. The planet isn’t getting any bigger and most of the land that’s suitable for farming is already being farmed, so we can make poor quality land better by optimizing plants for those climates, and continue to get more yield out of our existing agricultural land using fewer inputs.

New plant breeding methods can help us meet this challenge. They allow us to develop crops that can deliver essential nutrients to chronically malnourished populations, with applications like Golden Rice or biofortified sweet potatoes;  address plant diseases that threaten food security in the developing world such as wilt-resistant bananas  and virus-resistant cassava; improve resilience with drought-tolerant cultivars of staple crops; and reduce post-harvest waste through non-browning apples and longer-lasting lettuce. I could go on but I think you get the picture…

Modern breeding methods reduce our reliance on inputs like water, fertilizers, and pesticides, and help us feed more people from our existing agricultural lands. As such, they promote ecological balance and help conserve biodiversity and should be absolutely consistent with the principles of organic production. We need all the tools in the toolbox; it seems nonsensical to throw certain tools out of the window because they don’t fit a set of criteria solely developed to describe a labelling standard about a process.

Technology and progress are why Canada’s agricultural soils are now a net sink for carbon and why our biodiversity index has shown steady and consistent improvements since being implemented in 1981. These improvements are the direct result of innovation in agriculture and should be embraced by all farmers. Yet the organic label prohibits their adoption. It makes no sense.

We need to all be pulling in the same direction to maximize yield while minimizing environmental impact. Labels create a false dichotomy that leaves the public thinking that they have to pick between two opposing philosophies. It’s a lose-lose situation, and the biggest loser will be the environment that we are leaving for future generations. So let’s do away with the labels and focus on finding the best tools for the job.

Maria Trainer, Ph.D., is Managing Director, Science and Regulatory Affairs at CropLife Canada, the trade association representing plant biotechnology companies, and a member of the American Council on Science and Health Board of Scientific Advisors. Follow her on Twitter @mariaat

This article was originally published at the American Council on Science and Health’s website as “Why I Hate Labels” and has been republished here with permission from the author.