Finding meaning in the music of our genes

Andrew Porterfield | January 19, 2018
This article or excerpt is included in the GLP’s daily curated selection of ideologically diverse news, opinion and analysis of biotechnology innovation.

While we know that how well we can sing or play a musical instrument may partly be determined by our genes, some scientists are taking the relationship between DNA and music a bit further. Quite a bit, actually: They are working on the idea that DNA actually is music, and that a composer creates a symphony or headbanger rock song much like our genes code proteins.

In his famous, often mind-bending book, Godel, Escher, Bach, Douglas Hofstadter theorizes the connection between music and genetics (and you’ll have to remember—or Google—recording tapes to get this):

Imagine the mRNA to be like a long piece of magnetic recording tape, and the ribosome to be like a tape recorder. As the tape passes through the playing head of the recorder, it is “read” and converted into music, or other sounds…When a “tape” of mRNA passes through the “playing head” of a ribosome, the “notes” produced are amino acids and the pieces of music they make up are proteins.

Taking this to a more mercantile extreme, some companies, like YourDNASong, will convert your DNA sequence to musical notes, creating a musical composition that’s uniquely, well, you. The music-DNA code match could be classical, jazz, or any other genre.

While this may sound like fun, there’s a serious side to matching gene expression patterns to music. The work may help us better understand the patterns that occur in genetics, and might even help pinpoint disease. 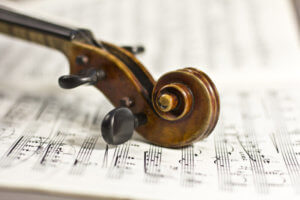 “When you hear inharmonious music it kind of catches your attention,” Alterovitz told The Scientist, “and that would be a sign of a pathological problem.”

While music has been around as long as we’ve been human, the idea of matching gene patterns with musical ones was started by a researcher named Susumu Ohno, who was head of research at City of Hope, a cancer hospital and research center in Duarte, California. In the 1980s, Ohno noted that gene expression, mutations and other molecular biology processes followed patterns, and periodic repetition, much like a musical composition:

Individual genes in the genome have been duplicated and triplicated often to the point ot redundancy, and each coding sequence consists of numerous variously truncated as well as various base-substituted copies. Musical compositions also rely on this principle of repetitious recurrence. Coding base sequences can be transformed into musical scores. Conversely, musical scores can be transcribed to coding base sequences of long open reading frames.

Since Ohno, who died in 2000, published his work, other scientists have been exploring this rather odd relationship between genes and music.

More recently, a group of Italian researchers examined gene regulation functions, such as DNA methylation and histone acetylation, and their relationships to music. Much of the repetitiveness noted by Ohno still exists at the molecular level, and the Italians proposed that music could actually influence the brain, if only by listening to it. “Music will shape our brains by depositing epigenetic marks and induce some musicians to compose,” they wrote in 2012. 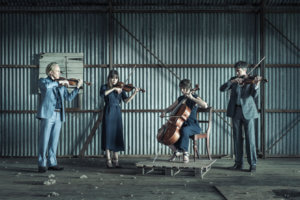 Other research has shown that differences in brain anatomy exist between musicians and non-musicians, including changes in the corpus callosum, and in motor, auditory and visual-spatial regions of the cortex. Music may even protect aging brains from cognitive decay that could lead to dementia. This protection may in fact arise from the melodic stimulus of music, possibly provided by adult neurogenesis.

And more recently, another group of Italian scientists looked at ChIP-Seq data of histone modifications (a now-common way to gather data on this epigenetic process), and discovered that once the data was converted into discrete sounds, the researchers could determine patterns of differential gene expression and other genetic actions that affected phenotypes.

Beethoven’s work shows discrete patterns. So does “Satisfaction” by the Rolling Stones, as does hip-hop. By mixing music and genes (at least the study of them), we may be able to determine just how each process works.