Late last year, researchers announced the first-ever attempt to edit genes inside a living human. As might be expected, it was greeted with a round of stories — both in mainstream and scientific publications — heralding the potential dawn of a new age in medicine.

It all sounds promising — using cutting edge technology to fix a rare life-threatening genetic defect. But as is often the case with these sorts of breathless announcements, there are reasons to be cautious. Chief among them: It’s going to be months, it not years, before we even know if it has a chance of working as hoped.

The patient is Brian Madeux, 44, who has Hunter syndrome, an X-linked extremely rare inborn error of metabolism. The condition is marked by the inability to produce an enzyme, iduronate-2-sulfatase, needed to break down some sugars. Over time, the sugars build up in blood, cells and connective tissue, causing organ problems, brain damage and death at a younger age.

Madeux is lucky in several ways — he has not experienced the cognitive decline seen in most patients and he has lived longer than the average patient, meaning he likely has the milder version of the disease. Still, his life expectancy is far below that of the average adult male.

That’s where Sangamo Therapeutics enters the picture. The California company is testing its gene-editing therapy for two metabolic diseases and hemophilia.

Dr. Sandy Macrae, the company’s president, described the procedure to reporters: “We cut your DNA, open it up, insert a gene, stitch it back up.” 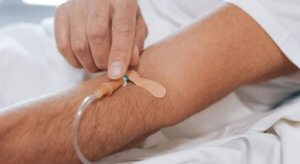 The longer, and more technical, explanation is that zinc finger nucleases are used along with a new gene and infused into the body. They travel to the liver, where the zinc fingers insert the functional gene, which is supposed to produce the enzyme that was missing. Previously, genes were edited in cells in a lab setting (and then returned to a patient), but this is the first attempt to change a gene in vivo.

That’s where the potential for problems comes in. Unlike cutting open a human body, cutting DNA can’t be changed once it’s done. A bungled surgery usually can be fixed or repaired. But whatever’s done to the DNA is for good. This has been a challenge even for gene therapies, where genes are corrected in the lab and carefully examined before being put back into a patient.

Consider what happened in 1999 to Jesse Gelsinger, who died four days after an experimental gene therapy procedure. According to the New York Times: “When Jesse got the vector, he suffered a chain reaction that the testing had not predicted — jaundice, a blood-clotting disorder, kidney failure, lung failure and brain death.”

And even if the initial results appear promising, it could be months or years before a full evaluation is possible. We saw this in 2002 after the initial positive results from a gene therapy trial (it started in 1999) involving twenty patients with severe combined immunodeficiency (SCID) or “bubble boy” disease. Patients with the extremely rare inherited condition cannot make B cell and T cell antibodies that respond to foreign antigens. They often die shortly after birth.

The trial, which used a retrovirus to insert a corrected gene, appeared at first to be a success, with patients showing normal immune responses. But just months after the team release its promising research results in 2002, one of the boys became sick with what would eventually be diagnosed as leukemia. Eventually, four more boys would develop the disorder, with one dying from it.

Further research showed that near the edited SCID gene was a cancer-causing gene (oncogene), LMO2, that had been activated by the retrovirus’ edited gene sequences.

With this in mind, we know that the full results of the first in vivo human gene editing experiment may not be known for years — whatever the short-term results may indicate.

Sangamo also is working on another metabolic disorder, Hurler syndrome (a disease in the same category as Hunter syndrome) and two types of hemophilia, Factor VIII deficiency (classical hemophilia) and Factor IX deficiency (Christmas disease). If those work, and there’s no apparent side effects from the procedure, other illnesses will no doubt be looked at.  Even then, they would have to be the types of conditions that could lend themselves to such a procedure.  Not all genetic modifications could be delivered in such a way.

But what if it does work without any side effects?

The genetic conditions that would benefit the most from the editing process are the single gene defect conditions — those caused by one malfunctioning gene. This would include autosomal recessive conditions and those that are X-linked.

These types of disorders are seen as the most promising for genetic editing, whether it’s from fixing the process in the genetic error that causes the condition or using the new technique to edit the gene itself.

It’s certainly not enough to envision cures for so many of these conditions that plague humanity, at least not yet. However, it’s not a certain failure, either.  All anyone can do is wait.

Annie Keller is a freelance medical writer in Columbus, Ohio.