This article or excerpt is included in the GLP’s daily curated selection of ideologically diverse news, opinion and analysis of biotechnology innovation.
It’s been two years since the Cancer Moonshot Initiative was unveiled during President Obama’s final State of the Union speech. The goal: to help make America “the country that cures cancer once and for all.”

The disease is the nation’s second leading cause of death. With people living longer, there’s more than a 40 percent chance that any one of us will be 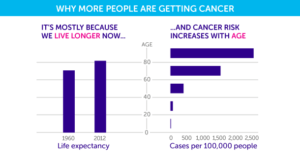 diagnosed with cancer at some point in our lifetime, and a 20 percent chance that it will be terminal.

The moonshot, which has been continued under the Trump Administration, hopes to speed the process by removing regulatory red tape to enable further collaborations between the private sector, governmental agencies, nonprofits and scholars. The goal is to achieve decades worth of advancements in a few years.

One of the areas where these sectors are coming together is in Genomic Data Commons. The GDC was launched in June 2016 to mainstream accessibility to clinical trials for more patients and create easier access to the resulting data for doctors, scientists and researchers. By enabling the sharing of data, decisions surrounding future treatment plans will be more informed, which should improve prognosis.

But with all that sharing of data comes a new challenge – how to analyze ever-growing databases full of genomic data. This is where we find ourselves looking at the melding of biotechnology with the computing power born in Silicon Valley. Indeed, supercomputers are key to the Cancer Moonshot,” wrote then U.S. Secretary of Energy Ernest Moniz in 2016:

These exceptionally high-powered machines have the potential to greatly accelerate the development of cancer therapies by finding patterns in massive datasets too large for human analysis.

Prior to this, treatments were often determined on a case by case basis. Access to a global network of information will enable doctors to develop better patient care plans based on patterns and outcomes of related cases.

Advancements in accessibility of data can be especially lifesaving for those with rare cancers. For example, mesothelioma cancer affects approximately 3,000 people annually. With smaller numbers than other cancers, the data collected in every clinical trial are crucial towards advancements in care.

Sharing of data is what prompted doctors to consider the use of Keytruda, a drug originally used for advanced stage melanoma, as a treatment option for pleural mesothelioma. Keytruda was effective therapy in approximately 76 percent of the treated pleural mesothelioma patients, which represents a promising

result and an improvement in prognosis. Among the 25 patients who received Keytruda, 28 percent had some shrinkage of tumors (partial responses), while 48 percent of the treated patients experienced stable disease (no increase in extent of tumors).

The Keytruda breakthrough, and others, are possible because of the sharing of large sets of data. The private sector, specifically Amazon, has been facilitating the exchange of data allowing the GDC to use their cloud services. A sustainable cloud model for the data is currently being worked on in partnership with both Amazon and Microsoft.

The cloud space will become increasingly necessary as the National Institutes of Health (NIH) expands its “All of Us” campaign. The campaign, initially named “Precision Medicine Initiative,” was announced three years ago to encourage people to contribute to a pool of genetic data. The hope is that by 2022 there will be 1 million participants involved. A participant submits blood and urine samples and basic measurements such as their height and weight, while also providing some family and health history.

Related article:  Herd immunity and where it fits in the fight against the coronavirus

Once an individual’s data has been stored at the Mayo Clinic’s biobank, they will have the option to have their complete DNA sequenced. Or they can choose a pared-down analysis called SNP genotyping. This smaller report shows only the key places in their genetic code associated with health risks or benefits.

Currently there are about 10,780 people enrolled in the beta testing phase. There will be a full unveiling of the initiative in the spring when the NIH pushes to have a diverse group of participants. The more data collected, and the more diverse that data is, the easier it will be to provide targeted customized care for cancer patients and preventative care for the larger population. 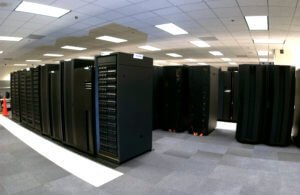 What the future holds

By employing supercomputers — like those housed at The University of Texas at Austin — the initiative is making progress in achieving the goal of curing cancer, although hitting the target date of 2020 is almost certainly unrealistic. The computers are instrumental in all iterations of the cancer fighting process, from chemotherapy and drug design, to immunotherapy, radiation and proton therapy, genomics and diagnosis.

The computers are just one way that the initiative is utilizing the most recent technology to accomplish a large feat – but such ambitious objectives have been accomplished before in the history of the country. The use of data is attempting to accelerate progress at a speed never seen before. Through small steps made from every corner of the country, the Cancer Moonshot hopes to cure cancer and ensure that one day people will have more tools to fight cancers.

One of the big challenges, though, is that cancer is not just one disease, as surgical oncologist David Gorski noted when the initiative was launched, but “many hundreds, if not thousands, of problems, many interrelated, some not, that require many different solutions.” Expectations for a quick fix should be held in check:

Progress in cancer research, like science, will always be incremental, resistant to surrendering to victorious scientists and physicians the way Germany and Japan surrendered to the Allies in 1945, resistant to promises to eliminate it in 12 years, and certainly resistant to focused “moonshot” efforts to solve it. That doesn’t mean that there aren’t some good ideas worth implementing in the Cancer Moonshot, nor does it mean that it wouldn’t be worth increasing cancer research funding significantly, given the decrease in real purchasing power of the NIH and NCI budgets since 2004. Invested wisely, such funding could certainly contribute to real advances. The problem is, as with all science, it’s very difficult to predict where, when, or how such advances will manifest themselves or even what they’ll be. All we do know is that they’ll come about through incremental progress based on prior research. Unfortunately, that message is not one that’s as appealing as that of the Cancer Moonshot.

Rachel Lynch is the media coordinator for the Mesothelioma Cancer Alliance. She works to raise awareness about asbestos exposure and to ensure that at-risk communities are aware of potential health impacts. The organization can be found at www.mesothelioma.com or on Twitter at @CancerAlliance.